Here are 25 Yogi Berra quotes that will make you shake your head and smile. 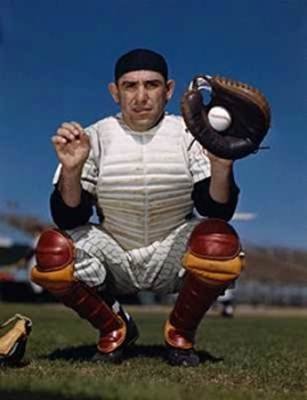 2. “We made too many wrong mistakes.”

3. “You can observe a lot just by watching.”

5. “He hits from both sides of the plate. He’s amphibious.” 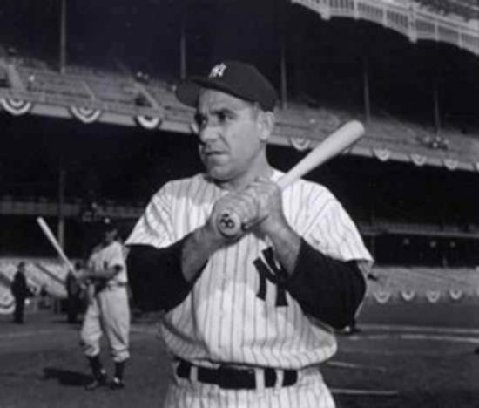 7. “If you don’t know where you’re going, you might end up some place else.”

8. Responding to a question about remarks attributed to him that he did not think were his:

“I really didn’t say everything I said.”

10. “I think Little League is wonderful. It keeps the kids out of the house.” 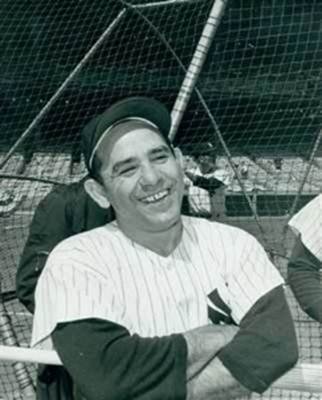 11. On why he no longer went to Ruggeri’s, a St. Louis restaurant:

“Nobody goes there anymore, because it’s too crowded.”

12. “I always thought that record would stand until it was broken.”

14. “All pitchers are liars or crybabies.” 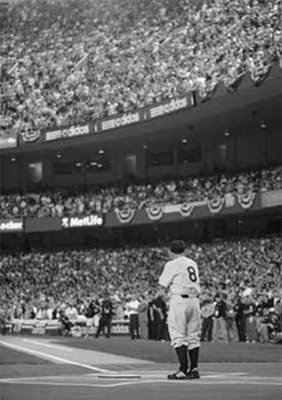 16. “Always go to other people’s funerals, otherwise they won’t come to yours.”

18. On being the guest of honor at an awards banquet:

“Thank you for making this day necessary.”

19. “The towels were so thick there I could hardly close my suitcase.” 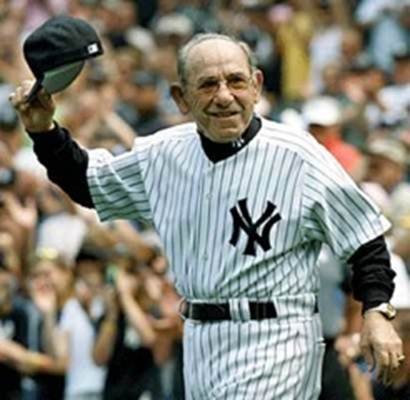 22. “I don’t know” (if they were men or women running naked across the field).  “They had bags over their heads.”

24. Carmen Berra, Yogi’s wife asked: “Yogi, you are from St. Louis, we live in New Jersey, and you played ball in New York. If you go before I do, where would you like me to have you buried?” Yogi’s answer: “Surprise me.”

My wife sent me a selfie in a new dress. She asked, “Does this make my butt look big?”

Submitted by a faithful Our Town News reader

–
Hi, Fred, this is Richard, next door.  I’ve got a confession to make.  I’ve been riddled with guilt for a few months and have been trying to get up the courage to tell you face-to-face.  At least I’m telling you in this text and can’t live with myself a minute longer without you knowing about this.
The truth is that when you’re not around I’ve been sharing your wife, day and night.  In fact, probably much more than you.  I haven’t been getting it at home recently, and I know that’s no excuse.  The temptation was just too great.  I can’t live with the guilt and hope you’ll accept my sincere apology and forgive me.
Please suggest a fee for usage and I’ll pay you.
Regards, Richard
–
NEIGHBOR’S RESPONSE:
Fred, feeling so angered and betrayed, grabbed his gun and shot Richard, killing him.  He went back home and poured himself a stiff drink and sat down on the sofa.  Fred then looked at his phone and discovered a second text message from Richard.
–
SECOND TEXT MESSAGE:
Hi Fred, Richard here again.
Sorry about the typo on my last text.  I expect you figured it out and noticed the darn Auto-Spell Correct had changed “wi-fi” to “wife”.
Technology, huh? It’ll be the death of all of us.
Regards, Richard
–
–
++++++++++
–
–

​
(These glorious insults are from an era before the English language got boiled down to 4-letter words.) ​
​
A member of Parliament to Disraeli: “Sir, you will either die on the gallows or of some unspeakable disease.”​
“That depends, Sir, “said Disraeli, “on whether I embrace your policies or your mistress.”​
​
“He had delusions of adequacy.”​ – Walter Kerr​
​
“He has all the virtues I dislike and none of the vices I admire.”​
– Winston Churchill​
​
“I have never killed a man, but I have read many obituaries with great pleasure.”​  – Clarence Darrow​
​
“He has never been known to use a word that might send a reader to the dictionary.”​
-William Faulkner (about Ernest Hemingway)​
​
“Thank you for sending me a copy of your book; I’ll waste no time reading it.”​  – Moses Hadas​
​
“I didn’t attend the funeral, but I sent a nice letter saying I approved of it.”​  – Mark Twain​
​
“He has no enemies, but is intensely disliked by his friends.”​
– Oscar Wilde​
​
“I am enclosing two tickets to the first night of my new play; bring a friend, if you have one.”​
– George Bernard Shaw to Winston Churchill​
​
“Cannot possibly attend first night, will attend second… if there is one.”​
-Winston Churchill, in response​
​
“I feel so miserable without you; it’s almost like having you here.”​
– Stephen Bishop​
​
“He is a self-made man and worships his creator.”​
-John Bright​
​
“I’ve just learned about his illness. Let’s hope it’s nothing trivial.”​
-Irvin S. Cobb​
​
“He is not only dull himself; he is the cause of dullness in others.”​
-Samuel Johnson​
​
“He is simply a shiver looking for a spine to run up.”​
– Paul Keating​
​
“In order to avoid being called a flirt, she always yielded easily.”​
-Charles, Count Talleyrand​
​
“He loves nature in spite of what it did to him.”​  – Forrest Tucker​
​
“Why do you sit there looking like an envelope without any address on it?”​  – Mark Twain​
​
“His mother should have thrown him away and kept the stork.”​
– Mae West​
​
“Some cause happiness wherever they go; others, whenever they go.”​
– Oscar Wilde​
​
“He uses statistics as a drunken man uses lamp-posts… for support rather than illumination.”​  – Andrew Lang (1844-1912)​
​
“He has Van Gogh’s ear for music.”​  – Billy Wilder​
​
“I’ve had a perfectly wonderful evening. But I’m afraid this wasn’t it.”​

The Difference Between COMPLETE & FINISHED

No English dictionary has been able to adequately explain the difference between these two words. In a recent linguistic competition held in London and attended by, supposedly, the best in the world, Samdar Balgobin, a Guyanese man, was the clear winner with a standing ovation which lasted over 5 minutes.

Here is his astute answer:

He won a trip around the world and a case of 25 year old Scotch.

No matter how much you push the envelope, it’ll still be stationery.

If you don’t pay your exorcist you can get repossessed.

I’m reading a book about anti-gravity. I just can’t put it down.

I didn’t like my beard at first. Then it grew on me.

Did you hear about the crossed-eyed teacher who lost her job because she couldn’t control her pupils?

When you get a bladder infection, urine trouble.

I stayed up all night to see where the sun went, and then it dawned on me.

England has no kidney bank, but it does have a Liverpool

Haunted French pancakes give me the crepes.

This girl today said she recognized me from the Vegetarians Club, but I’d swear I’ve never met herbivore

I know a guy who’s addicted to drinking brake fluid, but he says he can stop any time.

A thief who stole a calendar got twelve months.

When the smog lifts in Los Angeles U.C.L.A.

I got some batteries that were given out free of charge.

A dentist and a manicurist divorced. They fought tooth and nail.

With her marriage, she got a new name and a dress.

Police were summoned to a daycare center where a three-year-old was resisting a rest.

Did you hear about the fellow whose entire left side was cut off? He’s all right now.

He had a photographic memory but it was never fully developed.

When she saw her first strands of gray hair she thought she’d dye.

Acupuncture is a jab well done. That’s the point of it.

Those who get too big for their pants will be totally exposed.

In ancient Israel, it came to pass that a trader by the name of Abraham Com did take unto himself a young wife by the name of Dot.  And Dot Com was a comely woman, broad of shoulder and long of leg.  Indeed, she was often called Amazon Dot Com.

And she said unto Abraham, her husband, “Why dost thou travel so far from town to town with thy goods when thou canst trade without ever leaving thy tent?”

And Abraham did look at her as though she were several saddle bags short of a camel load, but simply said, “How, dear?”

And Dot replied, “I will place drums in all the towns and drums in between to send messages saying what you have for sale, and they will reply telling you who hath the best price. And the sale can be made on the drums and delivery made by Uriah’s Pony Stable (UPS).”

Abraham thought long and decided he would let Dot have her way with the drums. And the drums rang out and were an immediate success. Abraham sold all the goods he had at the top price, without ever having to move from his tent. To prevent neighboring countries from overhearing what the drums were saying, Dot devised a system that only she and the drummers knew. It was known as Must Send Drum Over Sound (MSDOS), and she also developed a language to transmit ideas and pictures – Hebrew To The People (HTTP).

And the young men did take to Dot Com’s trading as doth the greedy horsefly take to camel dung. They were called Nomadic Ecclesiastical Rich Dominican Sybarites, or NERDS.

And lo, the land was so feverish with joy at the new riches and the deafening sound of drums that no one noticed that the real riches were going to that enterprising drum dealer, Brother William of Gates, who bought off every drum maker in the land. And indeed did insist on drums to be made that would work only with Brother Gates’ drumheads and drumsticks.

And Dot did say, “Oh, Abraham, what we have started is being taken over by others.” And Abraham looked out over the Bay of Ezekiel, or eBay as it came to be known. He said, “We need a name that reflects what we are.”

And Dot replied, “Young Ambitious Hebrew Owner Operators.” “YAHOO,” said Abraham. And because it was Dot’s idea, they named it YAHOO Dot Com.

Abraham’s cousin, Joshua, being the young Gregarious Energetic Educated Kid (GEEK) that he was, soon started using Dot’s drums to locate things around the countryside. It soon became known as God’s Own Official Guide to Locating Everything (GOOGLE).

That is how it all began. And that’s the truth! More Concepts From The Fringe