The REAL Dividing Line (in England) 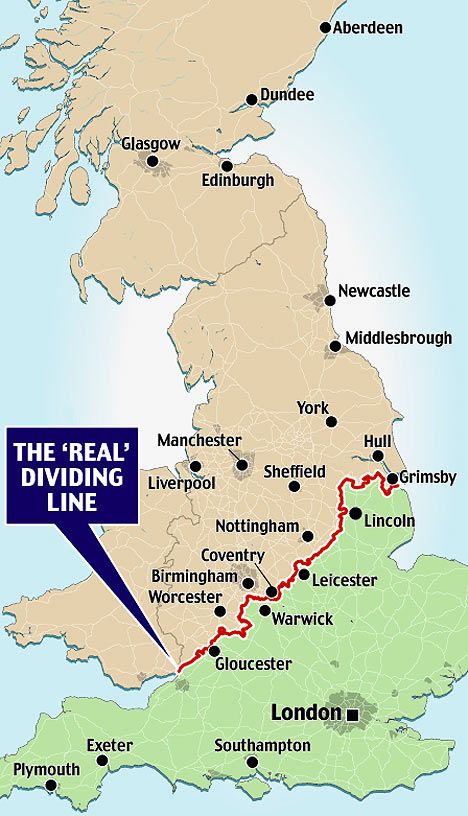 In Great Britain as in the US, two cultural sub-nations identify themselves (and the other) as North and South. The US’s North and South are quite clearly delineated, by the states’ affiliations during the Civil War (which in the east coincides with the Mason-Dixon line). That line has become so emblematic that the US South is referred to as ‘Dixieland’.

There’s no similarly precise border in Great Britain, maybe because the ‘Two Englands’ never fought a civil war against each other.There is, however, a place used as shorthand for describing the divide, with the rougher, poorer North and wealthier, middle-to-upper-class South referring to each other as ‘on the other side of the Watford Gap’.

Not to be confused with the sizeable town of Watford in Hertfordshire, Watford Gap is a small village in Northamptonshire. It was named for the eponymous hill pass that has facilitated travel east-west and north-south since at least Roman times (cf. Watling Street, now passing through it as the A5 motorway). Other routes passing through the Gap are the West Coast Main Line railway, the Grand Union Canal and the M1, the UK’s main North-South motorway.

In olden times, the Gap was the location of an important coaching inn (operating until closure in approximately 2000 as the Watford Gap Pub), and nowadays it has the modern equivalent in a service station – which happened to be the first one in the UK – on the M1, the main North-South motorway in the UK.

It turns out the divide is more between the Northwest and the Southeast: on this map, the line (which, incidentally, does cross the Watford Gap –  somewhere in between Coventry and Leicester) runs from the estuary of the Severn (near the Welsh-English border) to the mouth of the Humber. Which means that a town like Worcester is firmly in the North, although it’s much farther south than the ‘southern’ town of Lincoln.

At least, that’s the result of a Sheffield University study, which ‘divided’ Britain according to statistics about education standards, life expectancy, death rates, unemployment levels, house prices and voting patterns. The result splits the Midlands in two. “The idea of the Midlands region adds more confusion than light,” the study says.

The line divides Britain according to health and wealth, separating upland from lowland Britain, Tory from Labour Britain, and indicates a £100.000 house price gap – and a year’s worth of difference in life expectancy (in case you’re wondering: those in the North live a year less than those in the South).

The line does not take into account ‘pockets of wealth’ in the North (such as the Vale of York) or ‘pockets of poverty’ in the South, especially in London.

The map was produced for the Myth of the North exhibition at the Lowry arts complex in Manchester, and was mentioned recently in the Daily Mail . I’m afraid I don’t have an exact link to the article, but here is the page at the Lowry for the aforementioned exhibition.