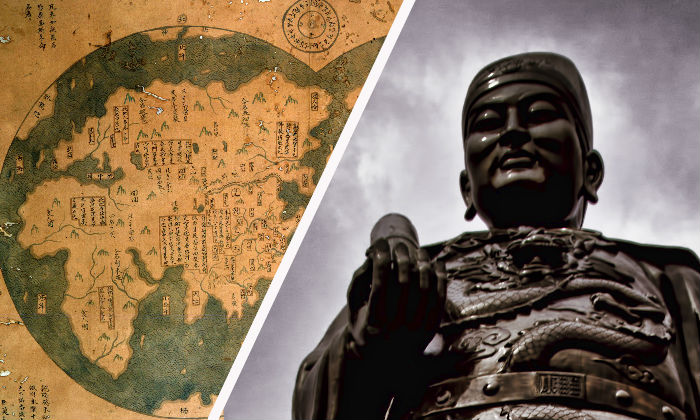 There are a few controversial claims floating around that the Americas were reached by oversea cultures before Columbus made his well-known visit to the “New World” in 1492. For example, Italian physicist and philologist Lucio Russo has presented the argument that the ancient Greeks reached America long before Columbus.

Another intriguing argument suggests the Chinese “discovered” the Americas 70 years prior to the famous voyage.

The suggestion that the Chinese arrival predated Christopher Columbus’s arrival in the Americas is a major argument of the amateur historian Gavin Menzies. In fact, it seems that Menzies has made his career by going against the mainstream view of the past.

Three of his more debated books are “1421: The Year China Discovered the World,”a book claiming a Chinese fleet led by Admiral Zheng He reached the Americas in 1421; its sequel “1434: The Year a Magnificent Chinese Fleet Sailed to Italy and Ignited the Renaissance”; and a text that mainstream thinkers regularly mock, “The Lost Empire of Atlantis: History’s Greatest Mystery Revealed.”

A Chinese map from 1418 seems to show parts of North and South America, according to Menzies.

You may wonder about Menzies’s claims. In the text “Who Discovered America: The Untold History of the Peopling of the Americas,” Menzies argues a Chinese map from 1418 provides evidence for his argument that the Chinese explored the Americas in 1421.

Specifically, Menzies makes mention to a map charted by Admiral Zheng He which appears to show North American rivers and coasts and something of South America. DNA studies are also used as his evidence for indigenous Americans being related to the waves of Asian settlers he asserts reached the Americas.

Menzies says the map helps explain the Chinese names of some places in Peru.

A Christie’s Auctions’ appraiser has allegedly confirmed the authenticity of the map. Historians are also said to have stated the map was written in the Ming Dynasty (1368–1644). Menzies says that the map’s validity can also be used to explain the Chinese names of several towns and regions in Peru.

Menzies has been repeatedly criticized and mocked by the mainstream academic community.

For example, University of London history professor Felipe Fernandez-Armesto has suggested that Menzies’s books are “the historical equivalent of stories about Elvis Presley in (the supermarket) and close encounters with alien hamsters.”

While it’s true Menzies may not be correct in his claims, it is extremely unfortunate that a person courageous enough to make his assertions has been so widely mocked for presenting an idea that dares to go against the mainstream.

Republished with permission. Read the original at Ancient-Origins.net.

Views expressed in this article are the opinions of the author and do not necessarily reflect the views of The Epoch Times.

Visit The Epoch Times Beyond Science page on Facebook to continue exploring the new frontiers of science!

In Beyond Science, The Epoch Times explores research and accounts related to phenomena and theories that challenge our current knowledge. We delve into ideas that stimulate the imagination and open up new possibilities.