Home
News
When major disasters happen, many reportedly foresee them in dreams 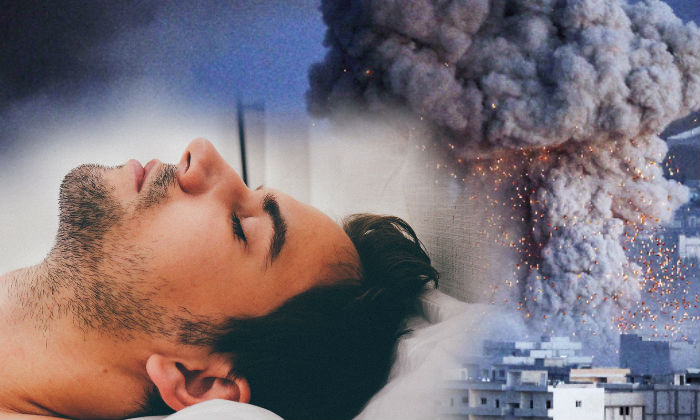 When major disasters happen, many reportedly foresee them in dreams

A sixth sense seems to kick in when disaster strikes
By Tara MacIsaac, Epoch Times

Reports of precognition and other kinds of extrasensory perception are common around major events in human history, the ones that really resound through the collective psyche—the world wars, 9/11, natural disasters.

Oftentimes the visions foretelling the future disaster come in dreams; other times phenomena can manifest while the person is awake at the exact time the event occurs.

It seems soldiers were able to send telepathic messages from the battlefield to their loved ones during World War I.

French astronomer and author Camille Flammarion collected accounts during World War I of seemingly precognitive or telepathic phenomena. He wrote in his book, “Death and Its Mystery” (1921): “I received a great number of letters telling of telepathic transmissions sent from the battlefields.”

One of the examples he gave was that of “Madame D.” She was worried about her husband away at war because she hadn’t heard from him in a long time. She finally received a letter from him on August 25, 1914, putting her mind at ease.

Later that day, at precisely 3 p.m. while she was listening to her sister play the piano, she suddenly stood up, uttered a terrible cry, and fainted. When revived, she said she had seen horrible slaughter on the battlefield and watched her husband fall dead.

She collapsed with a vision of her husband dying on the battlefield at the precise time of his death.

Flammarion wrote: “Objections might be raised. In the course of continuous warfare it is not surprising that a young woman who worshiped her husband should have feared for his safety. The worth of the facts related does not lie in this intuition, but in the precise coincidence of the day and of the hour with the moment of the catastrophe, a catastrophe which happened on the exact day when this poor woman had attained peace of mind.”

The strength of the vision and shock also sets this case apart from vague dreams or intuitions, Flammarion said.

He had already written in the past about similar cases: “One of them even indicated death on a date differing from that given by the army bureaus; a date which, when verified, was found to be exact. The official date was not.”

It is common for people to feel the distress of a loved one at a distance—this is called simulpathity.

Dr. Bernard Beitman, a Yale-educated psychiatrist who studies coincidences, calls this kind of experience simulpathity—feeling the distress of a loved one at a distance. He started studying coincidences because of a personal simulpathity experience.

In the days and weeks leading up to 9/11, many people reportedly had precognitive dreams or sensed a pending disaster.

On September 9, 2001, 29-year-old Andrew Bailey woke up screaming. He had a nightmare that the Grim Reaper had come for him.

“Andrew always told me he would die before he was 30,” his wife, Miosotys Fernandez, told the Birmingham Mail. Bailey died in the World Trade Center two days after his Grim Reaper dream.

When his wife later looked in his cupboard, she was shocked. “All of his things were laid out in there, his wallet, credit cards, and watch—items he would normally have taken with him to work,’’ she said. ‘‘It was as if he knew he was leaving me that morning and never coming back.”

Bonnie McEneaney, whose husband also died in the 9/11 attack, recalled a similar experience. She spoke to many other families affected by the attack and found precognition to have been a common experience. She published a book titled “Messages: Signs, Visits and Premonitions from Loved Ones Lost on 9/11” about this phenomenon.

As September approached, her husband became tense and was sure he was going to die soon.

Her husband, Eamon McEneaney, had always told her he would die young, that he wouldn’t survive long past the year 2000. In the weeks before 9/11 he was more tense, she said in an article she wrote for the Daily Mail. He talked about the possibility of another attack on the World Trade Center (the North Tower had been bombed in 1993).

He told her, “You’d better start applying more discipline to the children because when I’m gone you’re going to have a hard time.”

“Taken singly, many of these things could be dismissed as coincidence or a side-effect of immense grief, but the fact that so many 9/11 families were experiencing similar phenomena made it all more difficult to dismiss,” she wrote.

The American Society for Psychical Research is collecting accounts of dreams and premonitions about 9/11, though it has not yet published any findings.

Many people reported precognitive dreams about a mining disaster in Wales that killed more than 100 school children.

In the 1960s, British psychiatrist Dr. J.C. Barker collected accounts of dreams that seemed to predict the famous Aberfan disaster. A coal mine collapsed in the Welsh village of Aberfan, killing more than 100 school children.

Barker requested through the media that people contact him if they had dreamed about the disaster beforehand. He received 76 accounts, 24 of which he was able to corroborate.

In the dream, a woman saw an avalanche of coal tumbling down the mountain.

For example, the dream with the strongest evidence for precognition was that of a 47-year-old woman from Plymouth, England. In the dream, she saw an avalanche of coal tumbling down the mountain. She knew it was in Wales. At the bottom of the mountain was a boy who looked scared, but she saw that he was rescued. The boy stood near a rescue worker with a strange pointed hat.

After the disaster, a British newscast showed this boy and the same rescue worker with the unusual hat. Barker spoke to several of the woman’s acquaintances whom she had told about the dream before the mine collapsed. They confirmed she had told them the details before it happened.

The Global Consciousness Project, led by Dr. Roger Nelson, set out in 1998 to test the hypothesis that heightened global emotion during major events has a physical impact. The ability to physically impact things with your mind is called telekinesis.

Here’s how he tested global telekinetic power during worldwide events: Previous experiments at Princeton University had suggested that the human mind can have a physical impact on random number generators. These generators are like electronic coin flippers. There’s a 50 percent chance of either heads or tails. If a person focuses her mind on tails and tails comes up 80 percent of the time (above what chance alone would dictate), it could mean her mind telekinetically made it happen. That’s a simplified illustration of how it works.

The idea of the Global Consciousness Project was to set up random number generators and, over the course of many years, see if they deviated from chance during major events. They did.

Nelson wrote in a Global Consciousness Project (GCP) blog post announcing the results last year: “The result is a definite confirmation of the general hypothesis … that great events on the world stage which bring people together in shared thoughts and synchronized emotions will be correlated with changes in the behavior of our network of random sources.”

We shouldn’t blame ourselves if we intuitively know something bad will happen but we don’t prevent it.

Cognitive neuroscientist Dr. Julia Mossbridge studies precognitive dreams. She said that sometimes when she gives talks on the subject someone in the audience who has lost a child will become upset and say, “You’re saying I should have known or I could have known and I could have prevented it.”

That’s not the case. The premonitions are often unclear and it’s understandable if people think their dreams are just dreams.

“Do you know how bad memory is?” Mossbridge said. “Memory is already bad, but this is weaker than memory. This precognition stuff, most people are not even aware that they have some aspect of this. It’s like blaming yourself if you can’t run a four-minute mile.”

In Beyond Science, The Epoch Times explores research and accounts related to phenomena and theories that challenge our current knowledge. We delve into ideas that stimulate the imagination and open up new possibilities. Share your thoughts with us on these sometimes controversial topics in the comments section below.