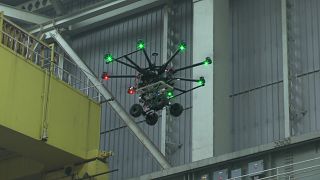 Potholes are the bane of drivers’ existence and a major, expensive, headache for authorities.

But researchers at the University of Leeds in the UK are hoping to deploy a drone capable of detecting and filling cracks in the road within the next couple of years, slashing costs and the number of potholes in the process.

“We are not talking about repairing very large potholes, like half-a-metre potholes,” Robert C. Richardson, a professor at the University of Leeds’ School of Mechanical Engineering, told Euronews.

“If you can repair small or medium=sized cracks before they turn into potholes, they will never become potholes.

“It’s a very proactive situation,” he said, especially given that in the UK, “the rate of potholes appearing is greater than them being repaired. So it’s a losing battle.”

Over the last decade, authorities in England have spent over 1 billion pounds (€1.13 billion) to fill nearly 18 million potholes, according to the Annual Local Authority Road Maintenance (ALARM) survey.

Last year alone, 1.7 million potholes were filled at a cost of 102.3 million pounds (€115.6 million). Outraged drivers have also demanded compensation from authorities for damage done to their cars, costing local councils a combined 28.3 million pounds (€32 million). According to ALARM, 82% of claims related specifically to pothole damage.

In Italy, repairing all the roads ridden with potholes would cost up to €42 billion, while in the US, pothole damage is estimated to cost drivers $3 billion (€2.6 billion) annually, according to an AAA survey. In India, 10,876 road accidents in 2015 were due to potholes, official figures show.

The French capital had to launch an emergency plan earlier this year after a particularly cold winter inflicted severe damage on some of its streets. To make the process faster, the city used a new process whereby glue and a mix containing bitumen are sprayed onto the road and then pressed down with a compactor.

The drone, though, would eliminate the need for such heavy machinery, manpower and reduce inconvenience as roads wouldn’t have to be closed for so long.

At the moment, the drone can fill in a “reasonable amount of cracks” with a 3-D printed substance. The advantage of using 3-D printing, Richardson argued, is that “we can add different things in the mix, vary the property of the filling and make a better fit.”

“The way potholes work is that there’s a mismatch between how strong the material you put in the ground is and the asphalt road. As the ground surrounding (the road) vibrates in a different way, it can disrupt.”

“If you can fill (cracks and potholes) not just with a neat, clean path but change the properties of the material deposited, the road becomes much more resilient to damage,” Richardson explained.

(For the balance of this article please see: https://www.euronews.com/2018/07/04/this-drone-can-fill-in-potholes-with-3-d-printed-materials/)