Experts say that the United States is experiencing torrential rain events, not only more frequently, but that more rainfall is occurring and the problem is only getting worse.

The number of flash flood events is rising in the United States. Many of these are caused by tropical ocean waters, but many others by increasingly intense thunderstorms. Long-rising air temperatures have led to an increase in the sheer size of storms.

Warmer air holds more water and as a result, these immensely larger storms are not only dropping a massively increased amount of rain, but that rain is falling faster.

Some areas are seeing records being shattered for the wettest days.

In an interview with the Washington Post, Andreas Prein, an atmospheric scientist at the National Center for Atmospheric Research in Boulder, Colorado said, “Things are definitely getting more extreme. You just have to look at the records. All areas of the continental U.S. have seen increases in peak rainfall rates in the past 50 years.”

“There is a chance that we are underestimating the risk, actually,” Prein added.

According to GlobalChange.gov, since 1958, most areas of the United States have seen an increase in the amount of rain falling in very heavy events. The sole exception is Hawaii, which is actually down by 12 percent.

The amount of these heavy rain events increases from West to East. In the lower western and southwestern states, the amount is only 5%. In the Pacific Northwest, the number is 12%. However, as you move to the east, the numbers continually climb. In the central United States from north to south, the increase is 16%. From there the numbers jump dramatically. In the southern and southeastern states, the increase has been 27%. In the northern and mid-central states, from Minnesota down to Missouri toward the West and Ohio toward the east, the increase has been 37%. But the most dramatic change has been from West Virginia northward all the way up to Maine, where heavy rain events have jumped an astonishing 71% in the past 60 years. 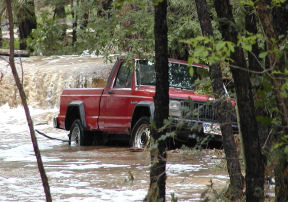 Increase in flooding events and magnitude

Many areas have seen 1-in-1000-year storms occur that have brought about severe flooding. Statistically, this definition means there is 1/10 of a 1 percent chance in any year that such a storm will hit.

However, this past year saw Ellicott City, Maryland experience not one, but two of these rare storms in back-to-back years.

Extreme weather statistics tracked by the National Climate Assessment shows more than a quadrupling of heavy downpours since 1960.

As a result, they have also seen as much as an 18% increase in flood magnitude in many areas of the US, particularly the eastern half. To the west, there has also been an increase in flash flooding in California by 6-12 percent in some areas.

According to the National Climate Association, who have posted their findings on the government website on extreme weather, the fault for the change since the 1950s is a direct result of human-caused climate change.

“The mechanism driving these changes is well understood. Warmer air can contain more water vapor than cooler air. Global analyses show that the amount of water vapor in the atmosphere has in fact increased due to human-caused warming. This extra moisture is available to storm systems, resulting in heavier rainfalls. Climate change also alters characteristics of the atmosphere that affect weather patterns and storms.”