Her dramatic death often overshadows her epic life, but it shouldn’t. 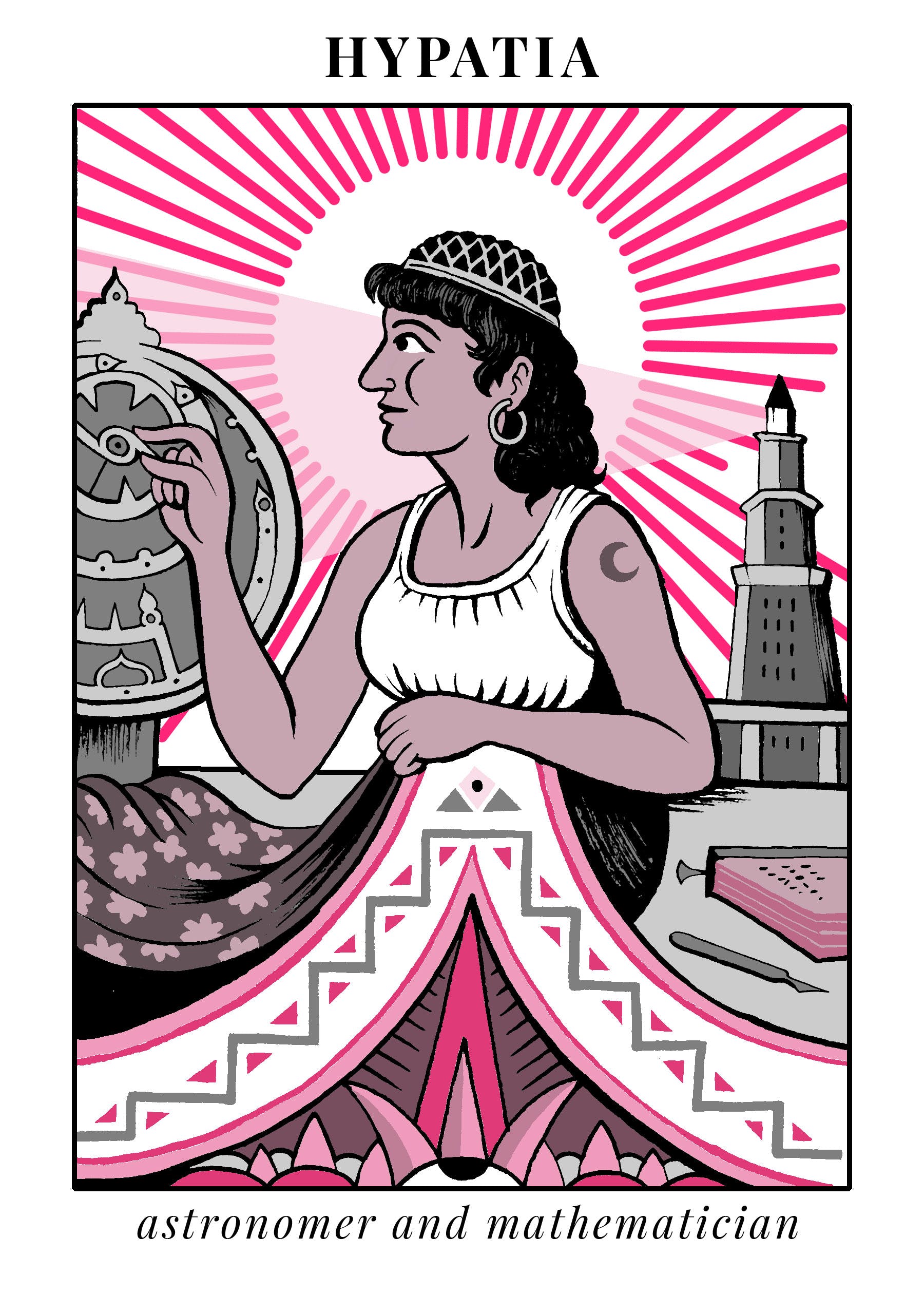 The mathematician, astronomer, and philosopher Hypatia is considered the first known female mathematician and one of the “last great thinkers” of Alexandria, the sophisticated Ancient Egyptian city.

Why the last? Tension between religious and secular factions seeking control over the city boiled over in the early 400s, leading to her violent murder and turning her into a martyr for scientists, pagans, and atheists.

Hypatia’s death is much better recorded than her life – historians aren’t even sure when she was born (sometime around 350 CE). But there is plenty of evidence that Hypatia was a tremendous scholar.

If you wanted to learn math and astronomy in Alexandria, it helped if your dad was Theon, the last known member of Alexandria’s museum (not a museum in the sense we use the word now but more of a “university”). Theon taught Hypatia and sought her help with some of his commentaries – republications of someone else’s work with notes interpreting and explaining various parts.

Commentaries such as these played an important role in preserving and advancing ancient Greek works at a time when such works were seen by many as “pagan” and opposed to Christian ideals. Many historians believe that at least one of the commentaries attributed to her father, the third book of Theon’s version of Ptolemy’s Almagest, an astronomical text used widely until the 16th century, was actually written by Hypatia.

This authorship debate sometimes overshadows works that are conclusively hers, including commentaries written under her own name on topics including geometry, number theory, and astronomy. If it weren’t for Hypatia, works like On the Conics of Apllonius, which introduces hyperbolas, parabolas, and ellipses, would likely have been forgotten, because their concepts were written in dense jargon – Hypatia was skilled at translating complex mathematical topics in terms the general public could understand.

Unfortunately, these commentaries have been lost – most of what we know about Hypatia’s work is from letters to her and passing references in historical accounts. Some people have credited her with developing a device called an astrolabe (an astronomical calculator of sorts). While she did teach her students about them, and likely helped design more elaborate versions, it was probably invented by someone else.

Hypatia also became a renowned Neoplatonic philosopher, rising to lead the Platonic School at Alexandria and giving public lectures in addition to private lessons. Hypatia’s association with “science” and “learning” led her to be labeled a “pagan,” a dangerous thing at a time when paganism was seen by many as a kind of “religious rival” threatening to pull people away from Christianity. But Hypatia taught students of all backgrounds. People came from all over the world to hear her speak, and she held great respect from the male-dominated society.

Historian Socrates Scholasticus wrote of her:

She not unfrequently appeared in public in presence of the magistrates. Neither did she feel abashed in coming to an assembly of men. For all men on account of her extraordinary dignity and virtue admired her the more.

Hypatia was a master networker – she had an “in” with many powerful figures in the ancient world, including the governor of Alexandria, Orestes. This popularity likely spawned jealousy in archbishop Cyril, already in a foul mood due to a feud with Orestes over control of the city. Orestes was a Christian, but he didn’t think the Christian Church should encroach on “civil government.” Cyril, on the other hand, wanted the church to have more control in secular affairs. The argument led to Cyril’s monks trying to assassinate Orestes, but they only succeeded at putting Orestes on high alert. But they didn’t have to look far for an easier target – Hypatia regularly traveled around, giving public lectures proudly espousing “pagan” views.

She was also a target for other reasons: as a close acquaintance to Orestes, Hypatia likely advised him regarding the feud, and some of Cyril’s followers saw her as getting in the way of conflict resolution, even accusing her of using witchcraft to sow divide. In 415 or 416, a mob of Christian zealots attacked Hypatia’s carriage on the streets of Alexandria, dragged her into a church, and violently killed her and burned her body.

Hypatia’s brutal death turned her life into a “martyr story” that has been used by scientists, pagans, and atheists throughout the ages as evidence of long-standing discrimination and the “evils” of the Christian Church. But another version of her story to remember is that of a powerful woman considered a world leader in philosophy and mathematics at a time when most women were confined to domestic duties.

This piece was produced in partnership with Sloan Science & Film, an initiative of the Museum of the Moving Image that publishes science-based film guides, including for Alejandro Amenábar’s feature Agora (2009). The film stars Rachel Weisz as Hypatia, and Oscar Isaac as her student. It was awarded the Sloan Feature Film Prize at the Hamptons International Film Festival for its realistic and compelling portrayal of science.

(Source of this article: https://massivesci.com/articles/hypatia-math-science-heroes/)