You may think that drinking one or two alcoholic beverages per day isn’t so bad. You might even believe moderate drinking is healthy—after all, it seems like every few months there’s a new study in the news linking alcohol consumption to a healthier heart, longer lifespan and decreased risk of diseases like diabetes.

But forget all that for now. A new study on global alcohol consumption, said to be the largest and most detailed of its kind, says the “safest level of drinking is none.”

Alcohol abstinence is “in conflict with most health guidelines, which espouse health benefits associated with consuming up to two drinks per day,” the study authors wrote. “Alcohol use contributes to health loss from many causes and exacts its toll across the lifespan, particularly among men.”

The study, published in The Lancet, used global data from the Global Burden of Disease report to analyze the effects that alcohol consumption had on 23 health conditions and alcohol-related risks among people ages 15 to 95 in 195 countries between 1990 and 2016.

The top 10 heaviest-drinking countries are all in Europe, with Romania leading the pack at an average 8.2 daily drinks among all men, and an astounding 12 drinks per day among men ages 45 to 59. The researchers defined a standard drink as one that contains 10 grams of alcohol, which is equivalent to a 12-ounce beer that’s 3.5 percent alcohol by volume. 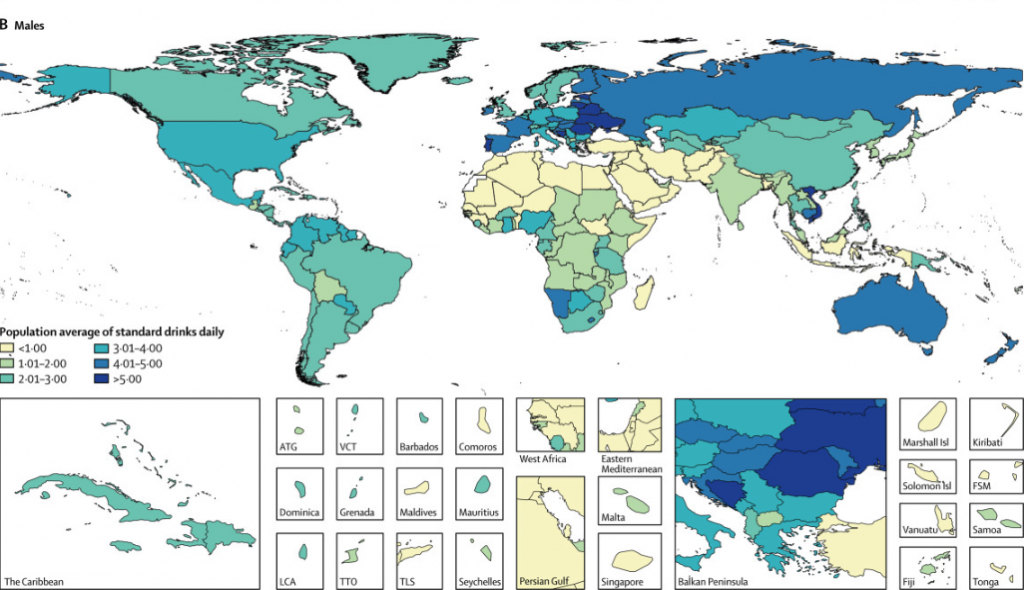 Globally, the most common causes of alcohol-related death among those ages 15 to 49 were road injuries, self-harm and tuberculosis. For people ages 50 and up, it was cancer.

“Alcohol poses dire ramifications for future population health in the absence of policy action today. Our results indicate that alcohol use and its harmful effects on health could become a growing challenge as countries become more developed, and enacting or maintaining strong alcohol control policies will be vital,” Emmanuela Gakidou, the report’s senior author, told The Guardian.

“Worldwide we need to revisit alcohol control policies and health programmes, and to consider recommendations for abstaining from alcohol. These include excise taxes on alcohol, controlling the physical availability of alcohol and the hours of sale, and controlling alcohol advertising. Any of these policy actions would contribute to reductions in population-level consumption, a vital step toward decreasing the health loss associated with alcohol use.”

(For the balance of this article see: https://bigthink.com/stephen-johnson/no-amount-of-alcohol-is-safe-warns-new-global-study/)