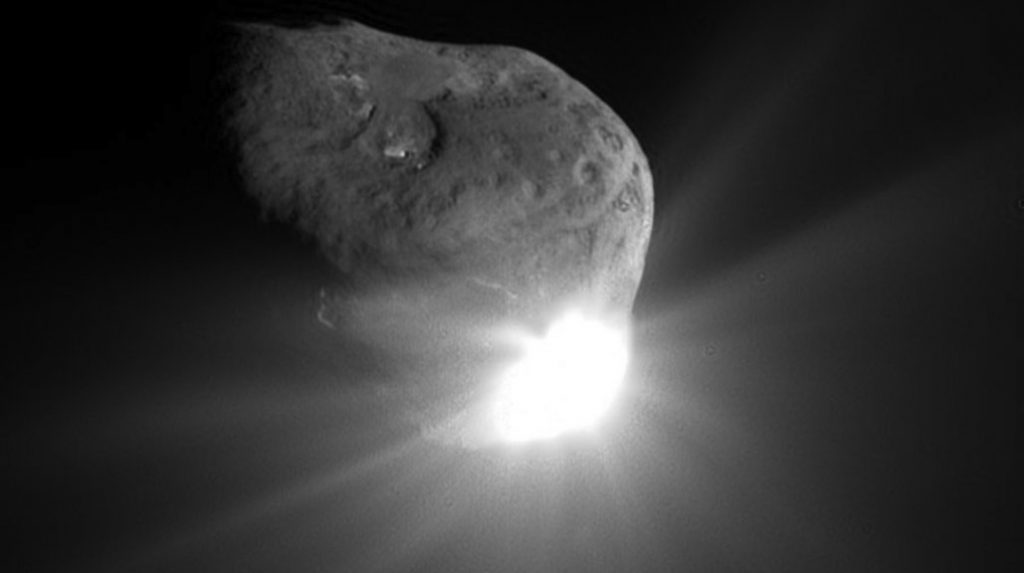 An asteroid of approximate size of a minimoon, c/o NASA.

For nearly four billion years, Earth and the Moon have been inseparable as they’ve journeyed together through the cosmic void. It’s our only permanent satellite we’ll ever know. But new research has unearthed (…unmooned?) evidence that our planet occasionally captures “mini-moons” every once in a while. These tiny asteroids zoom around our planet as temporary natural satellites.

The implications for this carries with it scientific and even commercial opportunities for our new space-age renaissance. A cadre of astronomers and scientists reviewed the history, properties and future potential that these mini-moons will have in a number of fields, scientific disciplines, and markets. These natural objects are referred to as either temporarily captured objects (TCO) or temporarily captured flybys (TCF.) The researchers stated that their inspiration for the name came from Austin Powers:

“As an homage to the Moon and Austin Powers we usually refer to TCOs and TCFs as “mini-moons” though, to be more precise based on their relative diameters, they may more accurately be considered micro-moons.”

How it was discovered

The existence of mini-moons was thought to be unlikely by a number of astronomers and even impossible because current data and asteroid surveys had shown no sign of natural geocentric objects in orbit. It’s possible that due to the incredibly small relative size of these objects, which are often moving too fast and are sometimes faulty labeled artificial – the discovery of mini-moons had continued to elude us.

Our Moon is roughly a quarter the size of our planet, which makes mini-moons infinitesimally small in comparison. These fast-moving and transient objects are difficult to detect, even though there may be loads of them floating around the planet. Mini-moons usually measure anywhere from 3 to 10 ft in diameter. Sometimes they’ll elope with our orbit for just a quick swing before going right back to revolving around the sun. There is still a lot to learn about these objects.

Twelve years ago, the first and only other mini-moon was detected by astronomers by the Catalina Sky Survey organization. It was named 2006 RH120 and measured to be 6 to 10 ft in length. It’s thought to enter Earth’s orbit around every 20 years. It remains our only known mini-moon for now.

There was some controversy over the nature of the object after discovery on whether or not it was another artificial object or really the first natural object known to be orbiting us besides the moon. From the white paper of the study:

“Several launch vehicle booster stages have achieved sufficient speed for them to escape the gravitational bonds of the EMS only to be subsequently recaptured in the system after a few decades. Subsequent astrometric observations of 2006 RH120 established its provenance as a natural object because the perturbations to its trajectory caused by solar radiation pressure were inconsistent with it being artificial.”

It’s expected that in the near future, advances in astronomical surveys will allow us to discover even greater quantities of mini-moons.

According to the researchers, there are a few more ways to detect these objects in the future:

Discovering a little teeny mini-moon might seem minuscule, but this research might help us better understand the nature of asteroids around the solar system, Earth-to-moon system relations and a whole host of other commercial and celestial data.

(For the balance of this article please visit: https://bigthink.com/mike-colagrossi/earth-has-more-moons-than-you-might-think/)