Analysis of data from the Juno probe shows the giant planet’s field is much different from our own and suggests it has a dissolved core. 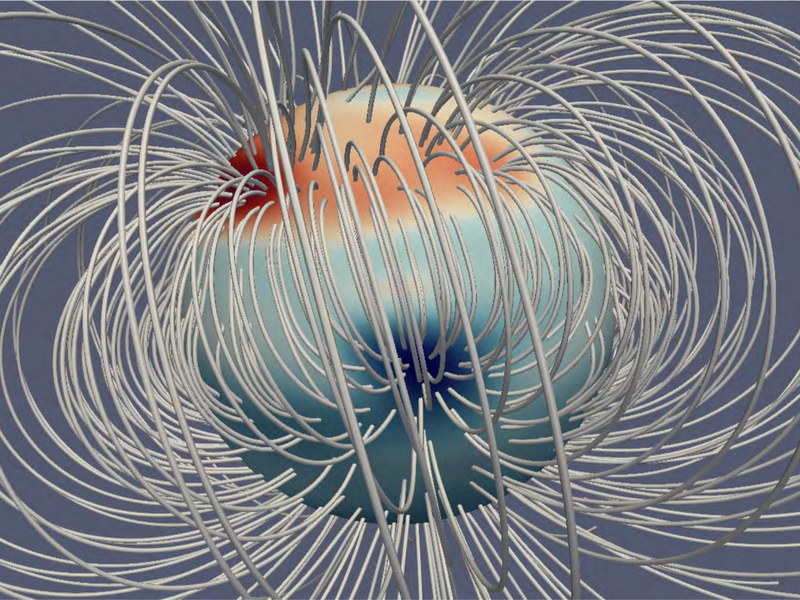 Researchers have known for awhile that Jupiter has a huge magnetic field that dwarfs our own. Most assumed that the field was similar to Earth’s with magnetic force lines exiting one pole of the planet and re-entering at the other pole, creating north and south poles similar to a bar magnet.

The gas giant’s field is actually quite different, a new study published in the journal Nature shows. Chris Jones at Nature News & Comment reports that a recent analysis of data collected by the Juno space probe, which has been orbiting the planet since 2016, suggests the internal structure of the planet is more complicated than we thought.

Juno dives into Jupiter’s gravitational field every 53 days while using fluxgate magnetometers to map the magnetic field. Camille M. Carlisle at Sky & Telescope reports that investigators used data from eight of these flybys to construct a map of the planet’s field, revealing northern and southern poles that are radically different.

When mapping magnetic fields, researchers often color lines emerging from a planet red and lines where they re-enter blue. In the case of Earth, the red lines would emerge at the magnetic north pole, curl around the planet, re-enter and turn blue at the south pole. Charles Q. Choi at Popular Science explains that Jupiter’s field isn’t so clean.

There’s a band of red near the north pole where the force lines emerge, but there are two blue areas, one near the equator that researchers dubbed “The Great Blue Spot” where they re-enter as well as another blue area near the south pole, in essence giving it two south poles. A large part of the magnetic field also appears to be concentrated in the northern hemisphere instead of being evenly distributed between the poles.

“It’s a baffling puzzle,” Kimberly Moore, a planetary scientist at Harvard University and first author of the study tells Ryan F. Mandelbaum at Gizmodo. “Why is it so complicated in the northern hemisphere but so simple in the southern hemisphere?”

The freaky field probably has a lot to do with the mysterious interior of the gas giant, and gives researchers some new clues to figuring out what’s happening inside.

“We now have a close-up view of Jupiter’s magnetic field, almost as good as our knowledge of the Earth’s field, which took hundreds of years to work out,” Chris Jones, a planetary scientist at the University of Leeds, who was not involved in the study, tells Choi. “This gives us a chance to work out what is really going on deep inside a planet other than the Earth.”

(For the balance of this interesting story please see: https://www.smithsonianmag.com/smart-news/jupiters-magnetic-field-super-weird-and-has-two-south-poles-180970223/)