Home
News
The Catch of the Day Is a 10,000-Year-Old Gigantic Deer Skull

Recently, Irish fishermen pulled up the skull and horns of an extinct great elk, which could have 12-foot-wide antlers. 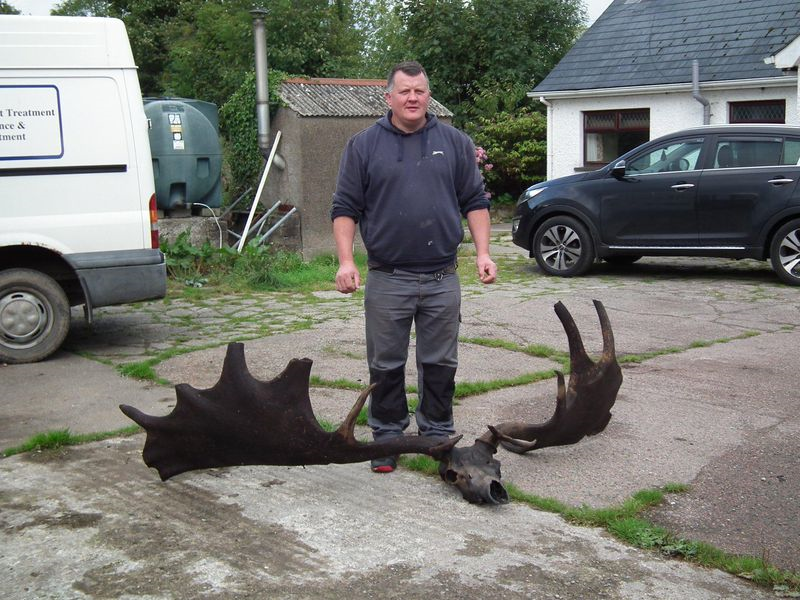 Recently, fishermen Raymond McElroy and Charlie Coyle were out on Lough Neagh, a lake near the town of Ardboe in northern Ireland, when they tried to pull up one of their nets. It would barely budge, so they assumed it was caught on a piece of driftwood. But Ronan McGreevy at The Irish Times reports what they pulled up wasn’t wood, it was bone. The fisherman landed the massive skull of a Great Elk (Megaloceros giganteus), the largest deer species to ever exist which died out in Ireland about 10,500 years ago.

This particular great elk probably stood 6.5 feet tall at the shoulders. More impressive, however, are its antlers, which in this case were also over 6 feet wide.

“I thought it was the devil himself,” Coyle tells McGreevy. “I was going to throw it back in. I didn’t know what to do with it.”

Luckily, however, McElroy knew just what the skull was since a huge jawbone from one of the elk—and possibly from the same animal—was fished up from the area in 2014, also making the local news.

The Great Elk, also known as the Irish Elk, has a misleading name. It’s not an elk, but a huge deer species—some individuals had antlers up to 12 feet wide. And it’s not Irish; according to the University of California Museum of Paleontology, the species actually roamed all of Europe, north Africa, northern Asia and a related species lived in China. The reason it is associated with Ireland is because intact fossils of the giant beast are sometimes found in lake beds and bogs on the island, which are especially good at preserving the bones.

The elk also has another claim to fame. In the eighteenth and nineteenth centuries, many scientists believed that the extinction of animals was impossible. Fossils, they believed, were just the remains of animals that explorers would eventually find somewhere hidden on Earth. The remains of the Great Elk was one of the animals used by French scientist Georges Cuvier to show that extinction did in fact take place.

Mike Simms at the Ulster Museum tells Shauna Corr at Belfast Live that the Great Elk was well-suited to the early Pleistocene when Europe was full of grassy plains, but when the last glaciers receded and the habitat changed, the elk couldn’t cope.

“They came in [to Ireland] when the weather was great on the grass plains, but then the trees started to grow,” he says. “Giant antlers aren’t great in the forest. Environmental change is what caused their extinction.”

Simms says that the species went extinct in Ireland about 10,500 years ago but managed to hold on in Siberia until about 6,500 years ago.

Currently, the plans for the antlers are unclear, and McElroy is keeping the massive skull in his garage. Kimberley Hickok at LiveScience reports that in 1987 another fisherman pulled up a massive set of antlers from the lake and donated them to a local school for display.

(Read more: https://www.smithsonianmag.com/smart-news/catch-day-7-foot-tall-deer-180970247/)
Give the gift of Smithsonian magazine for only $12! https://bit.ly/1cGUiGv
Follow us: @SmithsonianMag on Twitter