Home
News
&
WEIRD SCIENCE
After 150 Years, We Finally Had a Breakthrough Toward Turning CO2 Into Fuel

For a century and a half or more, researchers have been trying to figure out how to do something useful with all the carbon dioxide floating around in the atmosphere. We have loads of the stuff, we emit it every time we exhale, but all it’s doing is hanging around in the atmosphere, making our planet warmer and causing a number of potentially very unpleasant side effects in the process.

Scientists would really love to find a way to turn it all into fuel, which would presumably kill two birds with one stone by giving us a replacement for greenhouse gas-emitting fossils. But this has been easier said than done: Not only have scientists struggled to figure out how to store whatever gets reduced from the carbon dioxide, they’re still struggling to understand how carbon dioxide reduction can even be catalyzed in the first place.

In other words, scientists have basically been messing around with CO2 since the mid-19th century, mixing it with different materials, heating it up, etc., only occasionally achieving a reaction (“150 years” is a reference to an 1869 experiment in which researchers used an electrocatalyst to convert CO2 into formic acid, a preservative). But while researchers have long understood this potential, they didn’t really understand what made these reactions take place. That made carrying out experiments in a controlled manner impossible, until now, thanks to a new experiment carried out by researchers at Columbia University School of Engineering. The findings of their paper were published recently in Proceedings of the National Academy of Sciences.

“We started doing this like how other people are doing this, through trial and error, and playing with different materials to see how the efficiency of CO2 conversion depends on material properties,” lead author Irina Chernyshova, associate research scientist at Columbia University School of Engineering and Applied Science, tells Inverse. “But that could take a life span.” 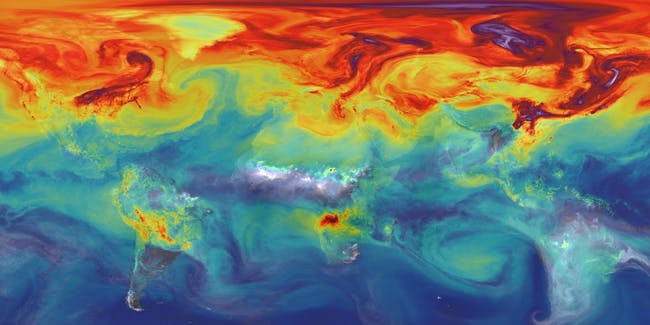 Their breakthrough, Chernyshova explains, has to do with the process of electrochemical reduction, or the conversion of CO2 into a simpler molecule by adding electrical energy. Using surface-enhanced Raman spectroscopy, the team was able to observe for the first time that carbon dioxide can be reduced using a single intermediary — carboxylate which attaches to the surface of the carbon and oxygen molecules — instead of two.

(For the balance of this article please visit: https://www.inverse.com/article/49033-after-150-years-we-finally-had-a-breakthrough-toward-turning-co2-into-fuel/)