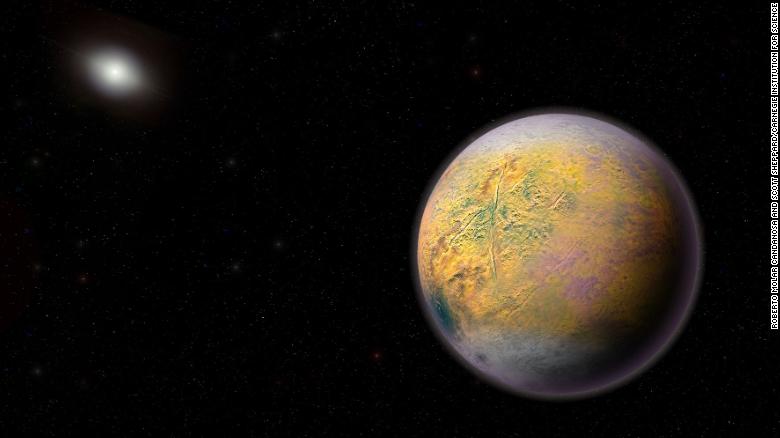 An Artist’s Conception of the Mysterious Planet X.

(CNN) While searching for the mysterious Planet X that some astronomers believe lurks on the edge of our solar system, researchers instead found an extremely distant object they dubbed “the Goblin.” And this object provides compelling evidence for the existence of Planet X.

The object is on the small end of being a dwarf planet, with a 40,000-year orbit — meaning it takes that long to go around the sun. That’s more than 2,000 times the distance between the Earth and the sun. Its current location is about 2½ times farther from the sun than from Pluto.

“I think we are nearing the 90% likelihood of Planet X being real with this discovery,” said Scott Sheppard, an astronomer at the Carnegie Institution for Science.

The Goblin got its nickname because the scientists first observed it around Halloween 2015. It is considered an Inner Oort Cloud object. The Oort Cloud is a predicted bubble around our solar system far beyond Pluto, filled with trillions of icy bodies and the supposed birthplace of long-term comets.

The International Astronomical Union’s Minor Planet Center announced the object, formally known as 2015 TG387, recently. The researchers, including Sheppard, Northern Arizona University’s Chad Trujillo and the University of Hawaii’s David Tholen, have also submitted a paper to the Astronomical Journal detailing their findings.

“This new object has the largest orbit of all the extremely distant objects that stay well beyond Pluto,” Sheppard said. Given its orbit, the Goblin never comes close enough to the giant planets in our solar system to be affected by their gravitational influence.

It joins other objects Sheppard and his team have found on the edge of the solar system since 2012. Their isolation makes them unique. “They can be used as probes to understand what is happening at the edge of our solar system,” Sheppard said. 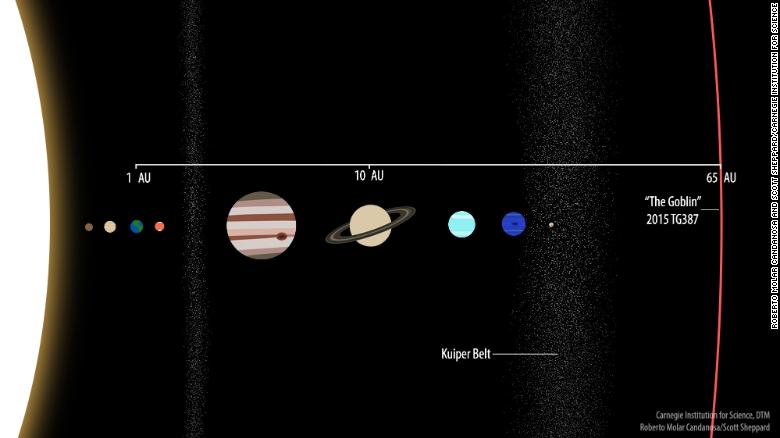 Our Solar System with The Minor Planet “Goblin”
–
The researchers were able to detect the Goblin in the first place because they’re using the Japanese Subaru telescope on Mauna Kea in Hawaii, one of the largest telescopes in the world and the most powerful survey telescope due to its large field of view.

Given the object’s slow movement along an elongated orbit, it took Sheppard and his team a few years of observing to understand the Goblin and its orbit.

“We think there could be thousands of small bodies like 2015 TG387 out on the Solar System’s fringes, but their distance makes finding them very difficult,” Tholen said in a statement. “Currently we would only detect 2015 TG387 when it is near its closest approach to the Sun. For some 99 percent of its 40,000-year orbit, it would be too faint to see.”

So if the Goblin is unaffected by the gas giant planets in our solar system, what contributes to its strange orbit? That’s where Planet X comes in.

Like the other objects found by Sheppard and his team on the edge of the solar system, the Goblin behaves in a way that is pushed into a similar orbit by some unseen force.

Based on simulations using the basic parameters they have for Planet X, the researchers say the Goblin acts like it is “shepherded” by the planet but never nears the proposed massive planet. This is similar to why Pluto never gets too close to the gas giant Neptune, although their orbits actually cross.

“These distant objects are like breadcrumbs leading us to Planet X,” Sheppard said. “The more of them we can find, the better we can understand the outer Solar System and the possible planet that we think is shaping their orbits — a discovery that would redefine our knowledge of the Solar System’s evolution.”

(For the balance of this article please visit: https://www.cnn.com/2018/10/02/us/planet-x-search-new-object/index.html)