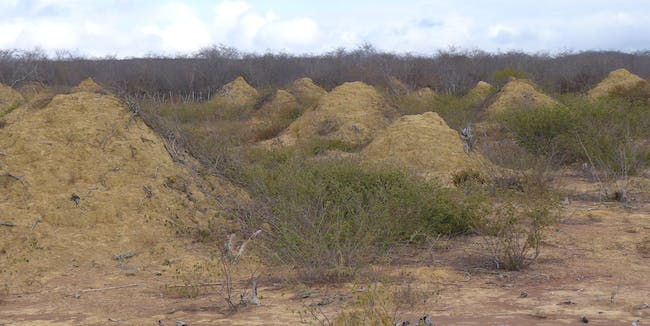 This is an image of the mounds.

Termite mounds typically outlive the colonies that built them, so it was doubly astonishing when thousands of insects were recently discovered existing among tall, dirt monoliths discovered in northeastern Brazil. These elaborate mounds, described recently in Cell, were the initial surprise — until recently, they were hidden from view by thorny scrub forests. Now, it’s obvious that tens of millions of conical mounds cover this part of the world and have done so for thousands of years.

In the new study, an international team of scientists explains that the mounds cover a complex subterranean network — tunnels that allow termites, guided by pheromones, to move from mound to mound, exploiting a food supply of rotting, fallen leaves. Study co-author Roy Funch, Ph.D. of Universidade Estadual de Feira de Santana in Brazil describes the mounds as “the world’s most extensive bio-engineering effort by a single insect species.”

This massive array of termite mounds is shown from an aerial view in the video. There are approximately 200 million of these mounds, each about 2.5 meters tall and 9 meters across. The regularly spaced piles look like polka-dots from above and cover a region roughly the size of Great Britain.

The mounds themselves — examined by Funch and his colleagues through a combination of satellite surveys and on-land excavations — have been there for thousands of years. Soil sample analysis revealed that the oldest mounds were built about 3,820 years ago, meaning that termites began building these eusocial settlements about the same time as humans were building the Pyramids of Giza.

The working theory behind the mounds’ existence is that they are a byproduct of a single termite species’ effort to build a network of tunnels, which would bring them close to dead leaf dinners. As the termites built their tunnels, mounds of dirt accumulated. These dumps of dirt mark evenly spaced locations and create a spatial pattern not unlike Namibian fairy circles. The mounds do not contain any internal structure, just a central tunnel that descends into the earth and intersects with other underground tunnels and narrow galleries containing dead leaves or more termites.

Unlike other termite mounds, these haven’t revealed any nesting sites and do not appear to serve as a ventilation system. Mysteriously a queen chamber hasn’t been found either — and in turn, no queen. Termites exist as self-organized systems in which every insect is divided into one of three social castes: soldiers, workers, and winged termites that are there to reproduce. Termite queens lay about 20,000 eggs daily and can reach ages of up to 20 years.

But just because she hasn’t been found doesn’t mean she’s not there — after all, the scientists are working with a terrain the size of Michigan. A living colony in an ancient network will take time to examine, and it’s an opportunity that the scientists don’t take lightly. “It’s incredible,” says co-author Stephen Martin, Ph.D., “that, in this day and age, you can find an ‘unknown’ biological wonder of this sheer size and age still existing, with the occupants still present.”

(For the balance of this article, including the video, please visit: https://www.inverse.com/article/51029-termite-mound-brazil-discovered-video/)