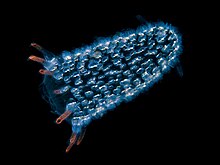 Two divers encountered a 26ft long deep-sea worm off the coast of Whakaari in New Zealand.

The creature is thought to be a Pyrosome, a huge hollow colony made up of thousands of individual organisms.

Diver  Andrew Buttle, 48, said: “Having never seen one in person or even footage or photos of one before, I was quite incredulous and elated that such a creature existed.

“It was very puzzling but also fantastic to be able to view it right up close and spend so much time with it.

“The island is 48 kilometres from the mainland, and there is a vast amount of fish life and nutrients in the water that may have had the right circumstances to become so large.”

From Wikipedia, the free encyclopedia:

Pyrosomes, genus Pyrosoma, are free-floating colonial tunicates that live usually in the upper layers of the open ocean in warm seas, although some may be found at greater depths. Pyrosomes are cylindrical or cone-shaped colonies made up of hundreds to thousands of individuals, known as zooids. Colonies range in size from less than one centimeter to several metres in length. They are commonly called “sea pickles”.

In 2017, pyrosomes were observed to have spread in unprecedented numbers along the Pacific coast of North America as far north as Alaska. The causes remain unknown, but one hypothesis is that this bloom may have resulted in part from unusually warm water along the coast over several preceding years. Scientists were concerned that should there be a massive die-off of the pyrosomes, it could create a huge dead zone as the decomposition of their bodies consumed much of the oxygen dissolved in the surrounding seawater.

(For the source of this article, and to watch a video about it, please visit:  https://www.telegraph.co.uk/news/2018/12/07/divers-encounter-26-foot-deep-sea-worm-new-zealand/amp/)