When we think of nuclear disasters, a few names probably come to mind. There’s the Chernobyl disaster, which killed around 27,000 people, although estimates are fuzzy. After Fukushima, there were no deaths due to radiation poisoning, but this event occurred relatively recently, and radiation poisoning often kills slowly over decades. When the U.S. dropped atomic bombs on Hiroshima and Nagasaki, estimates put the death toll at around 200,000 people, but again, exact numbers are difficult to calculate.

One name that almost certainly didn’t come to mind is Nevada. When the Soviet Union detonated their first atomic bomb in 1949, the U.S. was shocked into action. America’s prior nuclear testing had been carried out in the Pacific, but it was logistically slow and costly to conduct tests there. In order to maintain dominance over the growing Soviet threat, the U.S. selected a 1,375 square-mile area in Nye County, Nevada.

This was an ideal spot for several reasons. It was closer than Bikini Atoll. The weather was predictable and very dry, reducing the risk that radioactive fallout would be dispersed by rainstorms. It was sparsely populated. There was an understanding that there would be some amount of risk posed to nearby civilians, but it was deemed acceptable at the time. The trouble is, our understanding of radioactive fallout was still in its infancy. It was a catch-22; the only way to learn more was to test nuclear weapons.

New research with a wider scope

In the 1950s, the U.S. government downplayed the danger of radioactive fallout, asserting that all radioactivity was confined to the Nevada test site. Despite this, a national estimate attributed 49,000 cancer deaths to nuclear testing in the area.

But the results of new research suggest that this number is woefully inaccurate. Using a novel method, and today’s improved understanding of radioactive fallout, Keith Meyers from the University of Arizona discovered that U.S. nuclear testing was responsible for the deaths of at least as many — and likely more — as those killed by the nuclear bombs in Hiroshima and Nagasaki. Specifically, between 340,000 and 690,000 Americans died from radioactive fallout from 1951 to 1973.

Prior studies generally looked at the areas surrounding the Nevada test site and estimated the deaths caused by fallout from the area. This number was relatively low, owing to the dry, predictable weather mentioned earlier. However, the bulk of the deaths were actually dispersed throughout the country, primarily in the Midwest and Northeast regions. These deaths were caused by an unfortunate synergy between meteorology, radiation, and — perhaps oddly enough — cows.

An unforeseen vector of radiation poisoning

Out of all the radioactive elements produced by a nuclear explosion, iodine-131 was the biggest killer. I-131 has an eight-day half-life, tends to accumulate in the thyroid gland, and emits beta and gamma radiation. While alpha radiation is generally weak and doesn’t penetrate material very well, beta and gamma radiation are highly energetic and shoot through clothing and flesh, ripping up DNA as it goes along.

The now-radioactive rain fell onto the grasslands in the Midwest and Northeast. Then, cows ate the now-radioactive grass. The cows then produced radioactive milk. Dairy practices during the study period were different than they are today — most people drank milk that had recently been extracted from local cows.

Thanks to a National Cancer Institute database that contains broad data on radiation exposure, Meyers was able to track the amount of I-131 found in local milk and compare this with the number and nature of deaths on a county level. In this way, Meyers was able to determine that a significant number of these deaths were due to drinking poisoned milk. These civilians would have had no idea that the milk they were drinking had been irradiated by nuclear explosions hundreds of miles away.

Ironically, the area around the Nevada test site didn’t have this problem. Although they too drank fresh milk from local cows, they imported hay from other parts of the country. Since their cows weren’t eating irradiated hay, the local Nevadans took in significantly less radioactive material than their less-fortunate, distant countrymen.

Although our understanding of radiation and nuclear fallout is much improved since the dawn of the nuclear age, the study serves as a warning of the insidious nature of nuclear weapons. Containing nuclear fallout is challenging, even when you know where all of the vectors of radioactive transmission are. The complexity and intertwining nature of our ecological and social systems means that words like “clean,” “precise,” or “surgical” will likely never apply to nuclear weapons.

(For the source of this, and other related articles, please visit: https://bigthink.com/politics-current-affairs/new-estimate-deaths-from-us-nuclear-tests/) 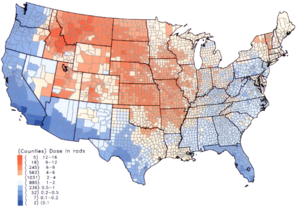 St. George, Utah received the brunt of the fallout of above-ground nuclear testing in the Yucca Flats/Nevada Test Site. Winds routinely carried the fallout of these tests directly through St. George and southern Utah. Marked increases in cancers such as leukemia, lymphoma, thyroid cancer, breast cancer, melanoma, bone cancer, brain tumors, and gastrointestinal tract cancers were reported from the mid-1950s through 1980.

On May 19, 1953, the United States government detonated the 32-kiloton (130 TJ) atomic bomb (nicknamed “Harry”) at the Nevada Test Site. The bomb later gained the name “Dirty Harry” because of the tremendous amount of off-site fallout generated by the bomb. Winds carried fallout 135 miles (217 km) to St. George, where residents reported “an oddly metallic sort of taste in the air.”

The Howard Hughes motion picture, The Conqueror, was being filmed in the area of St. George at the time of the detonation. The fallout is often blamed for the unusually high percentage of cancer deaths among the cast and crew.[citation needed] However, the rates of cancer from that cast and crew (>90 out of 220) were almost identical to the general population, in which 43% may be expected to contract cancer in their lifetimes, and 23% die from it. Nonetheless, there are speculations of a connection.

A 1962 United States Atomic Energy Commission report found that “children living in St. George, Utah may have received doses to the thyroid of radioiodine as high as 120 to 440 rads” (1.2 to 4.4 Gy). A 1979 study reported in the New England Journal of Medicine concluded that:

A significant excess of leukemia deaths occurred in children up to 14 years of age living in Utah between 1959 and 1967. This excess was concentrated in the cohort of children born between 1951 and 1958, and was most pronounced in those residing in counties receiving high fallout.

(For the source of this article, as well as additional information on fallout, visit: https://en.wikipedia.org/wiki/Nevada_Test_Site)

“the largest American nuclear-weapons test — the biblical, 15-megaton detonation on Bikini Atoll, 280 miles northwest of his island. Its flash was also seen from Okinawa, 2,600 miles away. Its radioactive fallout was later detected in cattle in Tennessee.”