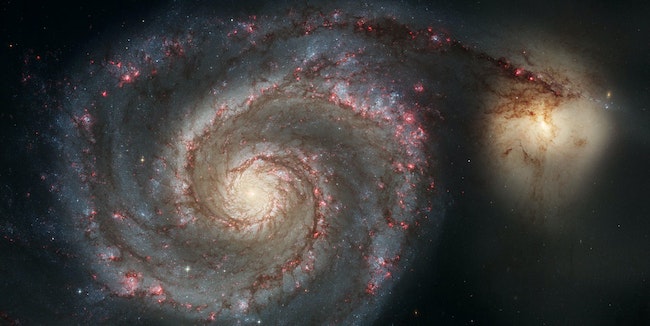 The spiraling Milky Way galaxy, which nestles our solar system in its Orion Spur, counts several large galaxies as its neighbors in the Local Group. This location is neither fixed nor particularly safe. Galaxies are always in motion, and as Durham University researchers report in a Monthly Notices of the Royal Astronomical Society paper recently, one of our closest neighbors, the Large Magellanic Cloud, is speeding down a crash course directly in line with our home.

The discovery made me very excited!

Anywhere from one to four billion years from now, study lead and cosmology researcher Marius Cautun, Ph.D., tells Inverse, the Milky Way could be smashed head-on by the the LMC. He admits the secondary effects of such a crash would be dangerous for life on Earth, but he’s more delighted at how much this discovery reveals about our own abnormal galaxy.

“The discovery made me very excited!” says Cautun, whose team put a preprint version of their paper on ArxIV. “Initially, both my collaborators and I were surprised and, because we didn’t expect it, a bit skeptical. This happens many times with new discoveries.”

Why We Didn’t See It Coming

The LMC was once thought to be weakly bound by gravity to the Milky Way, in the same way that the Earth is bound to the Sun. “If that would be the case,” says Cautun, “then the LMC would orbit the Milky Way for tens of billions of years without anything really interesting happening.” But new, unexpected data about the LMC suggests that a lot of interesting things are about to happen relatively soon. What scientists didn’t realize until recently is that the LMC is surrounded by a halo of dark matter that’s twice as massive as one would expect of a galaxy that size.

“As we show in the paper, a heavy dark matter halo for the LMC seals its fate to a single outcome: a prompt collision with the Milky Way,” says Cautun. In the study, the team used an EAGLE galaxy formation supercomputer simulation to predict what would happen — and when.

“I think the most surprising outcome is how quickly the merger will take place, in the next two billion years.”

What Happens After the Crash?

If humans are still around at that time, their survival after this crash will not be guaranteed.

“The collision will not affect directly the Solar System, however, it will trigger a secondary chain of events that can pose a danger to life,” says Cautun.

Two things will happen when the LMC runs into the Milky Way. As it moves, it will pull other stars away from their normal orbits around our galaxy and set them on less predictable courses — possibly one headed for our Sun. And if another star passes near our Sun, the orbits of the planets will shift.

Any such change is very dangerous for life.

“Any such change is very dangerous for life, since even small variations in the distance between the Earth and the Sun can move our planet outside the Goldilocks zone and make it either too hot or too cold for life,” says Cautun.

If we are “unlucky,” he adds, there is also a 1-3 percent chance that the solar system might be ejected from the Milky Way entirely. If our descendants manage to survive that journey, Cautun predicts they’ll likely see a “very different night sky, much darker than currently with only a modest bright patch that will correspond to the Milky Way galaxy.” The video above is a computer simulation of a galaxy like our own being approached by a satellite galaxy like the LMC; our Sun could end up like one of the many individual stars flung out during the crash. Kicked out of our home galaxy, the next-closest star to Earth after the Sun would be hundreds or thousands of light years away.

None of this sounds like good news (and it’s not), but the frightening truth is that galaxies crash into each other all time. Another of our not-so-friendly neighbors, the “cannibal” Andromeda galaxy, is believed to have collided with and eaten the Milky Way’s older sibling galaxy and is in the midst of another merger with the galaxy M32. The same goes for the Whirlpool galaxy and its M51b companion.

The collision will make everything right.

Terrible as it will be for any remaining humans, such a crash would actually restore the Milky Way to “normality,” as the team writes in their paper. Our galaxy is extremely unusual in that “it has an anemic central supermassive black hole (about 10 times smaller than galaxies of its size); it has a puny halo of old stars (also about 5 times smaller than typical); its halo has an undeveloped chemistry; and it has this oversized satellite, the LMC, lurking around,” says Cautun. Strangely, it doesn’t seem to have had a collision with any other galaxies for about 10 billion years, so a crash, he says, is “long overdue.”

Cautun and his team plan to use new data on the LMC from the Gaia space mission to better predict the exact timing of the impending crash. But now that we’re aware of how atypical the Milky Way is compared to its peers, he can confidently say: “The collision will make everything right.”