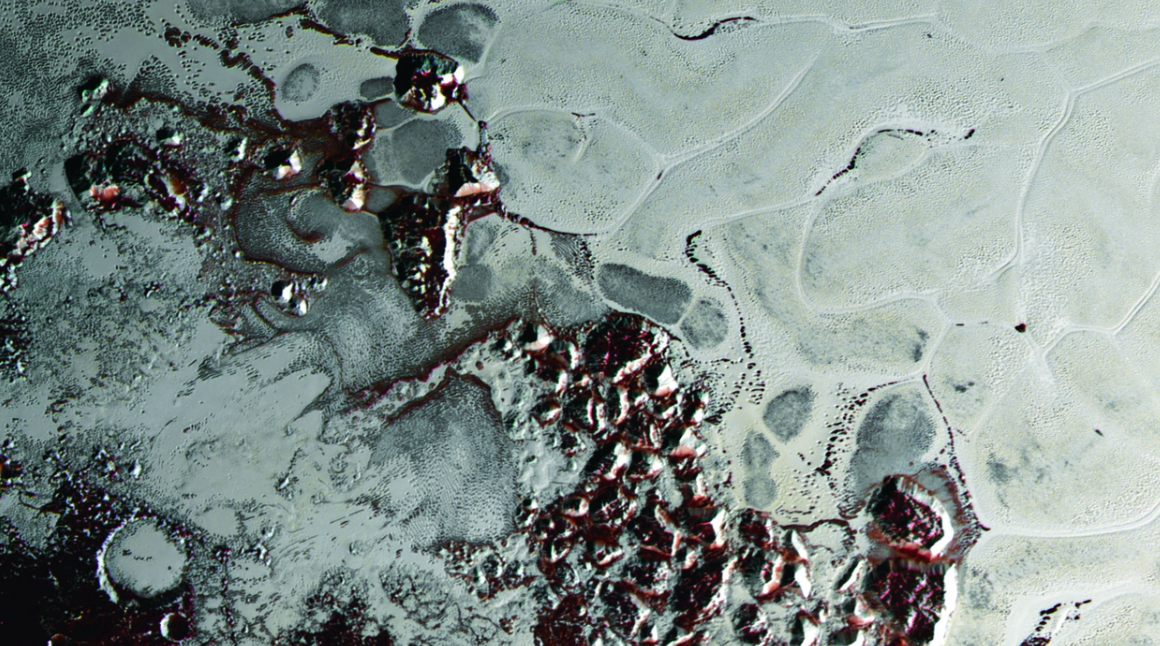 It was no easy feat for life to get started on Earth. There was a long way to go from jumbles of dead molecules to the complicated machinery of life. Earth’s tenuous atmosphere didn’t shield the planet so well from cosmic radiation, making it difficult for life to even get a foothold. There was no source of energy for food.

But as the environment changed, these obstacles were eventually surmounted, and life popped into existence anyways. There are a lot of ideas about how this happened, but many of these involve a broad group of cosmically abundant goo called tholins.

Carl Sagan wasn’t just famous for waxing poetic about the Pale Blue Dot: He was an accomplished astronomer, and in collaboration with his colleague Bishun Khare, he developed the concept of tholins, which he described as a “a brown, sometimes sticky, residue […] synthesized by ultraviolet (UV) light or spark discharge.”

Giving a name to these substances was necessary. Although they can vary in form and content wildly, they all share similar physical and chemical properties, and they are all formed in a similar way. Sagan—who really did have a way with words—also noted that he was “tempted by the phrase ‘star-tar’.”

What they’re made of

In a blog post for the Planetary Society, Sarah Hörst, a researcher at Johns Hopkins University, described their complexity:

Ultra-high-resolution mass spectrometry measurements I analyzed while in graduate school demonstrated that tholin contains at a minimum 10,000 different molecular formulas, which, once you account for different structures (isomers), could mean hundreds of thousands of different compounds!

When they are produced in a celestial body’s atmosphere, tholins like these form a red haze around the object, like Saturn’s moon Titan. They can also form when frozen methane, ethane, or other organic compounds are irradiated, which is why parts of Pluto and Europa appear red.

Fractures on Europa’s surface ice. The red coloration is believed to be because of tholins.  NASA

Tholins may be commonplace in our solar system, but they don’t naturally exist on Earth; the oxygen in our atmosphere breaks these compounds down rather quickly. But the various properties of tholins make them a good candidate for how life began, and they may serve as a marker for planets that may harbor life in the future.

These compounds offer a myriad of benefits for a planet that’s just starting to host life. When they are formed in the atmosphere, they produce a haze that helps block the planet from the cosmic radiation that would rip apart the delicate machinery of life (DNA or otherwise).

Laboratory experiments have shown that even modern microbial life can use tholins as a food source, so they may have done the same for Earth’s (or another planet’s) early life. And, although Earth cannot naturally host tholins today, this was not always the case. Oxygen only began appearing in Earth’s atmosphere a little over 2 billion years ago during the Great Oxygenation Event. Before that, its earliest atmosphere was made of hydrogen, ammonia, and water vapor, all of which can be combined into tholins. Some scientists have also speculated that icy comets and interplanetary dust delivered early Earth a payload of tholins.

Hörst’s research also uncovered a particularly exciting property of these compounds. She irradiated a series of compounds commonly found in Titan’s atmosphere (specifically, N2, CH4, and CO) to produce tholins similar to those they would expect to find on Titan.

So, in addition to blocking radiation and serving as an energy source, tholins may even give rise to life in a more direct way. What’s more, they are very common in our solar system and likely beyond. In our stellar neighborhood alone, tholins are believed to be present on Titan, Europa, Rhea, Triton, Pluto, Ceres, Makemake, and a variety of comets and asteroids.

Some of these objects may already host life in some form, particularly Titan, whose lakes of liquid gasoline could host life (albeit in a wildly different form than that found on Earth); Europa, which contains a lot of liquid water beneath its icy shell; and even Pluto, which may have a subsurface ocean like Europa. Tracking the presence and nature of tholins on these planets may serve as excellent clues into whether life exists and, if so, in what form.

(For the source of this, and other related articles, please visit: https://bigthink.com/surprising-science/why-tholins-may-have-helped-life-begin/)