In the modern day, we’re used to being able to send messages to specific people over long distances, usually by way of a phone. But now, scientists at MIT have developed a way to use a laser to beam an audible message through thin air to a person standing on the other side of a room, so that only they can hear it.

The technique works thanks to the photoacoustic effect, where a material gives off sound waves as a result of absorbing light. It was first explored as a means of long-distance communication way back in the 1880s by Alexander Graham Bell, inventor of the telephone, but the technology at the time wasn’t good enough to really get anywhere.

Bell’s biggest issue was that there weren’t light sources intense enough to transmit messages, nor receivers sensitive enough to pick them up. But the MIT researchers say they managed to solve both problems with a pretty ubiquitous piece of modern technology – the laser. Not only is a laser an intense enough light source, but using a specific wavelength means water in the air can be used as the “receiver” to absorb the light and emit sound waves in response.

“This can work even in relatively dry conditions because there is almost always a little water in the air, especially around people,” says Charles Wynn, leader of the research team. “We found that we don’t need a lot of water if we use a laser wavelength that is very strongly absorbed by water. This was key because the stronger absorption leads to more sound.” 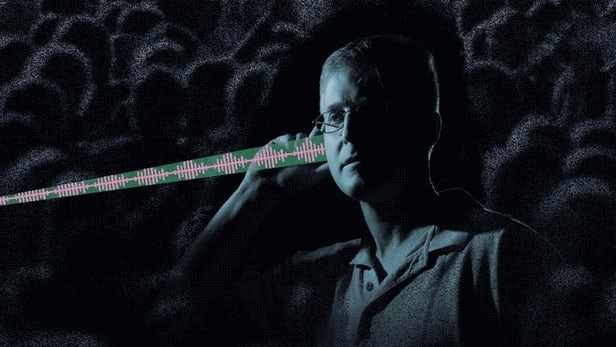 The researchers use water vapor in the air to absorb light and create sound. By sweeping the laser they can create an audio signal that can only be heard at a certain distance from the transmitter, allowing it to be localized to one person. (Credit: Massachusetts Institute of Technology’s Lincoln Laboratory).

The technique can be done in two different ways. The first, known as dynamic photoacoustic spectroscopy (DPAS), involves sweeping the laser across an area at the speed of sound. The researchers are able to encode different frequencies by changing up the length of each sweep, which creates different pitches in the sound. That also means the message can only be heard at a certain distance from the sender, so not everybody who passes through the beam will hear it. Using this method, the MIT team was able to send sound as loud as 60 decibels to a person more than 2.5 m (8.2 ft) away.

The second method does away with the sweeping motion, instead creating different sounds by modulating the power of the laser beam.

The researchers plan to continue testing the technology, with the next step taking the experiment outdoors to see what range it can be scaled up to.

The research was published in the journal Optics Letters.

Source: The Optics Society of America

(For the source of this, and other interesting articles, please visit: https://newatlas.com/photoacoustic-send-audio-message-air-laser/58185/)