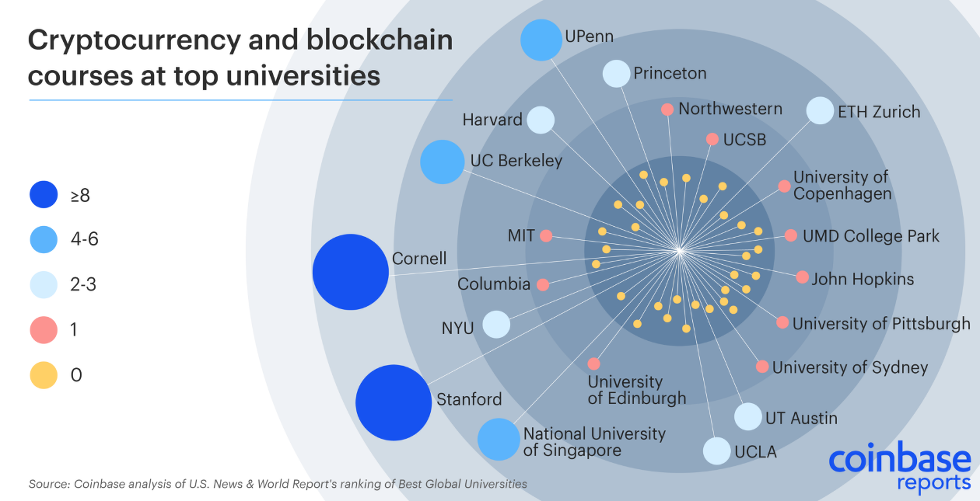 According to new research carried out by Coinbase, we’re witnessing a significant rise in the number of universities teaching their students about blockchain and cryptocurrencies.

It turns out that 42% of the world’s top universities are now offering at least one course on either cryptocurrencies or blockchain technology. While previously these courses only garnered interest from those studying math or computing-related subjects, they now have students from a large range of majors.

Which Universities Are Offering Courses on These Subjects?

Universities have been teaching and researching distributed ledger technology since before cryptocurrencies were mainstream.

However, the number of universities offering such courses has rapidly increased over the past couple of years, and will continue to rise for the foreseeable future.

Coinbase Reports has even created a chart to show the number of cryptocurrency and blockchain courses being taught at some of the top universities around the world.

Nir Kabessa, the President of Blockchain at Columbia stated:

“Schools such as Berkeley, MIT, Columbia, and Stanford are leading the race. MIT’s Bitcoin Club is a legendary organization which led to the formation of the Blockchain Education Network, a community of top blockchain labs and chapters.

Columbia University is gradually adding for-credit courses on blockchain, but its main source of education stems from its innovative institutions such as the DSI-IBM Research Center, Blockchain at Columbia, and Columbia Blockchain Studio. It is important to differentiate what type of education one is looking for.”

Each institution has its own pros and cons. Whilst some universities are famous worldwide for their intensive research into blockchain, their education department is lacking. Meanwhile, some of the institutions with the best teaching reputations have comparatively low scores for their research.

Can I Take These Courses Online?

As well as enrolling in these courses in universities, there is also the option to learn more about blockchain technology – and even gain professional qualifications – by studying online.

For instance, Coursera’s free course on Bitcoin and Cryptocurrency Technologies was created by Princeton University. So far it’s been rated by over 1,700 users and has received an average rating of 4.7 out of 5. New enrollments open every few days, and you can work the assignments around your schedule.

Similarly, Udemy’s Blockchain Technology: A Guide to the Blockchain Ecosystem teaches you to understand the entire blockchain ecosystem from the ground up.

If you’re a developer who wants to get involved in blockchain technology but have little to no experience, IBM is even offering a free Blockchain Essentials course that will teach you how to create your own private blockchain network on IBM Bluemix.

Do I Need to be a Computer Geek to Enroll?

Many people still associate cryptocurrencies like Bitcoin with computer geeks, cyber-criminals, and hackers from the dark web. However, this couldn’t be further from the truth.

Blockchain technology is still a very new concept, but it has advanced rapidly over the past few years. As time progresses, it’s becoming clear that the technology will only continue to become a more and more a vital part of our society.

David Yermack, the finance department chair at NYU Stern School of Business, first began to enroll students in his course on blockchain and financial services back in 2014. He started the course because he was interested in how fast Bitcoin was growing.

However, he now sees the course as a way for students to gain the skills they will require for jobs in the future.

In an interview, he stated, “A process is well underway that will lead to the migration of most financial data to blockchain-based organizations. Students will benefit greatly by studying this area.”

How Can I Use These Courses to Make Money?

Between 2017 and 2018, the blockchain job market has witnessed tremendous growth.

Perhaps one of the most obvious ways to use these courses to make money is to become a blockchain developer. Between January 2017 and January 2018, the demand for blockchain engineers on Toptal has grown by 700%.

In addition, websites such as Indeed.com, AngelList, LinkedIn, Crypto Jobs List, Blocktribe, Blockchainjobz, Joblift, and Upwork have seen a huge surge in the number of blockchain jobs available.

According to data collected by Indeed, the average salary of a blockchain professional in the US ranges from $63,000 per year to $157,000 per year – with marketing specialists being on the lower end of the scale and senior managing consultants being on the higher end.

A report from Bloomberg stated that the highest demand in the industry is for software development and financial services.

The Future of Blockchain

Blockchain technology has made a lot of progress over the past few years alone, but this is still just the very beginning.

Job positions are opening far faster than they can be filled, and right now is the prime time for those with the right skills to get involved.

(For the source of this article, as well as a couple of videos, please visit: https://bigthink.com/technology-innovation/universities-now-offer-blockchain-courses/)