The same 32 symbols show up in prehistoric European cave art. 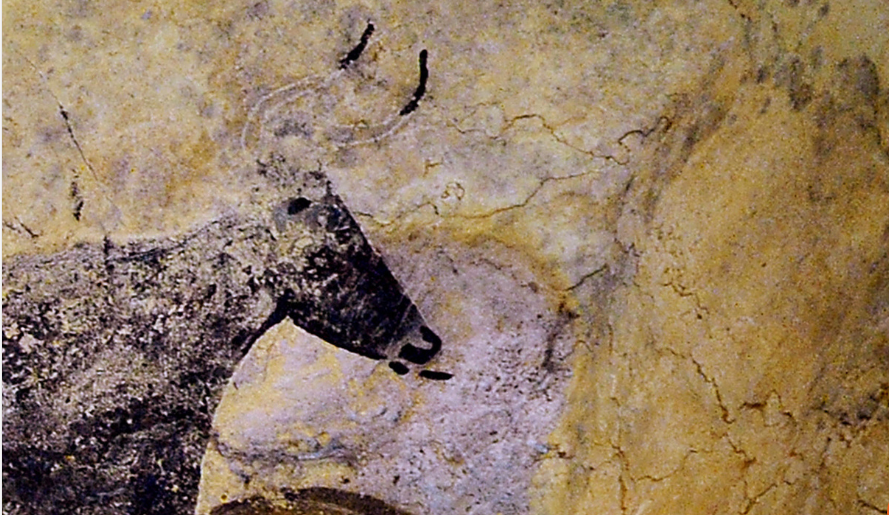 A flash of prehistoric magic transports a cave painter 40,000 years into the future. Landing in the here and now, he’s left frightened and bewildered by the bombardment of modernity. But there’s one ubiquitous symbol the ancient artist instantly recognises: the hashtag. He’s painted it on many a cave wall.

In fact, as this map shows, the # was almost as universal back then as it is now. The symbol crops up on cave walls in Europe and North America, across Africa and India, in Southeast Asia and as far away as Australia. And this is many millennia before the advent of broadband. Why? How? #DeepHistoryMystery.

Let’s start with that hashtag. ‘Deep history’ is a term that wants to examine the past of modern humans as a single unit, negating the usual, strict division of humanity’s past into prehistory and history. The difference between both is the written record, the oldest known examples of which date back to around 3400 BC in ancient Sumeria, present-day Iraq.

True, being able to write is a huge step forward: it gives humans the ability to record information and thus transmit it independent of space and time. But the prehistory/history dichotomy implies that the invention of writing was a light-switch moment: suddenly it was there, and then it changed everything.

New research into the geometric symbols that show up alongside ancient (‘prehistoric’) cave art offer the tantalizing possibility that humans have been experimenting with writing for many, many millennia more than we usually give them credit for.

Perhaps the world’s foremost expert in these symbols is the Canadian paleoanthropologist Geneviève von Petzinger, who as a PhD student at the University of Victoria (British Columbia) focused on Ice-Age rock art in Europe and elsewhere.

In 2013 and 2014, she visited 52 caves in France and southern Europe, taking note of the squares and triangles, straight and zigzag lines and other symbols usually ignored by earlier researchers, who were entranced by the painted wildlife also found on those cave walls. The signs are repeated and combined into what surely must constitute some kind of message.

Amazingly, the range of symbols was pretty narrow: no more than 32 in all of Europe. Von Petzinger also discovered that some of these symbols were subject to trends: hand stencils were all the range from 40,000 BC and are originally often found in combination with dots.

Later, hand stencils plus thumb stencils and parallel lines are all the range. Around 20,000 BC, hand stencils finally fall out of fashion. Penniforms (feather-shaped symbols) start in northern France around 26,000 BC and eventually spread south through Spain all the way to Portugal.

Although European caves have produced the widest range of ancient rock symbols, new research reveals that humans were already using about two-thirds of the symbols when they trekked from Africa to Europe. The symbols traveled with the spread of humanity itself, and not just in one direction.

As the map shows, at least some of Europe’s set of 32 symbols also crop up on rock walls in other parts of the world. This suggests that the symbols are part of a very stable, extremely ancient and fairly easy system for fixing and transmitting knowledge.

Will we ever know what those symbols mean? In all probability, no. But as some earlier theories suggest, it’s fun to guess.

Even though we’ll probably never be able to ‘read’ these cave symbols in the way the original artists intended, perhaps their greatest legacy will be that we abandon the powerful narrative of history as total darkness until the Sumerians flip the switch. These rock symbols show humans slowly but surely undimming the light many millennia earlier.

This map illustrates an article on Geneviève von Petzinger’s work featured in Becoming Human, a special issue of New Scientist bringing together updated versions of articles on human evolution that have appeared in the magazine throughout the past few years.

Von Petzinger also wrote a book, and here’s a TED talk she gave on her work.

(For the source of this article, plus a video, please visit: https://bigthink.com/strange-maps/cave-art-symbolic-language/)