Although there’s nothing like cycling with a good tailwind, your bike and your body are only capable of catching a limited amount of that wind. The CycleWing was designed to help, acting as – you guessed it – a sail for your bike.

Developed by software engineer Jorge Pando and mechanical engineer Nathan Rose, the CycleWing isn’t intended for use on crowded city streets. That would just be crazy. The idea is more that touring cyclists could use it while cruising for long distances along country roads, potentially saving them a considerable amount of effort. 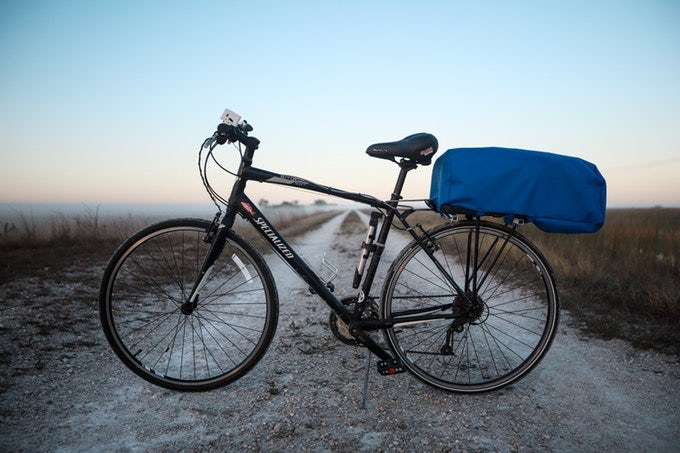 Mounted like a rear rack, the CycleWing stays folded down and covered when not in use.

Mounted like a rear rack, the sail and mast stay folded down and covered when not in use. Once riders want to get going – and if the wind is coming somewhere from behind – they manually set the CycleWing up within a few minutes.

As they subsequently pedal, riders use two handlebar-mounted buttons to rotate the sail to either side, in order to better catch the wind. A bar-mounted e-paper screen displays the angle to which the sail is currently set, along with the remaining battery life of the motor that rotates it.

Two handlebar-mounted buttons are used to rotate the CycleWing to either side, in order to better catch the wind.

Although it’s still in rough prototype form, plans call for the finished product to be made from lightweight materials such as carbon fiber, tipping the scales at less than 15 lb (6.8 kg).

And should you be interested, the CycleWing is presently the subject of a Kickstarter campaign. A pledge of US$500 (30 to 40 percent off the estimated retail price) will get you one, when and if it reaches production.

(For the source of this, and many other interesting articles, please visit:  https://newatlas.com/cyclewing-bicycle-sail/58303/)