A new technique has been used to turn ordinary metals into “metallic wood” with a greatly improved strength-to-weight ratio. By manipulating materials at the atomic scale, scientists from the University of Pennsylvania’s School of Engineering and Applied Science, Middle East Technical University in Turkey, the University of Illinois at Urbana–Champaign, and the University of Cambridge claim to have created a sheet of nickel that is as strong as titanium, but up to five times lighter.

Strong as steel is a cliché, but it’s one that’s true. Steel is so strong and so affordable that it’s hard for the average person to go through their day without seeing tons of it in the form of bridges, vehicles, building supports, and reinforced concrete, just to name a very few examples.

However, steel and other metals that we use on an everyday basis aren’t anywhere near as strong as they could be. The crystalline structure that make up metals like steel, aluminum, and titanium give them their strength and flexibility, but this structure is imperfect, so the forces applied to the metals under stress cause the atoms in them to slip and the structure to fail far below the metal’s theoretical strength limit. Titanium, for example, would be 10 times stronger if it had an ideal structure. 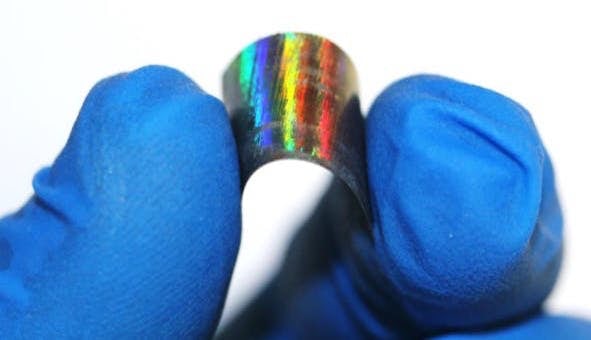 One way to overcome this can be found in ordinary wood. Pure cellulose, which is a major element in wood, is a mushy pulp, but when it’s formed into the complex structure of timber, it becomes so strong that wood and commercial steel, weight for weight, have comparable strength. The reason why steel seems so much stronger is that it’s much denser.

Led by James Pikul, Assistant Professor in the Department of Mechanical Engineering and Applied Mechanics at Penn Engineering, the new study looked at new ways to take metal and give it the porous structure that gives wood its strength.

In the past, this has been done by finding ways to turn molten metal into foam, or using 3D printing with hundred-nanometer precision to build up wood-like metal bit by bit. The problem is that metal foam is crude by modern engineering standards, while the 3D printing process is slow and very hard to scale up from lab-bench sizes.

“The reason we call it metallic wood is not just its density, which is about that of wood, but its cellular nature,” Pikul says. “Cellular materials are porous; if you look at wood grain, that’s what you’re seeing  –  parts that are thick and dense and made to hold the structure, and parts that are porous and made to support biological functions, like transport to and from cells.

“Our structure is similar. We have areas that are thick and dense with strong metal struts, and areas that are porous with air gaps. We’re just operating at the length scales where the strength of struts approaches the theoretical maximum.”

According to the researchers, the key was to go to much smaller scales to produce much greater increases in strength. They manage this by suspending plastic spheres a few hundred nanometers wide in water, which is allowed to evaporate. As the water disappears, the spheres drop into a neat geometrical, crystalline pattern. This is then electroplated with a thin layer of chrome and the spaces between the spheres are filled with nickel. The plastic is then dissolved, and what’s left behind is an open network of metallic struts with 70 percent empty space – making it light enough to float in water.

So far, the test metal has been in the form of foils that are about a square centimeter in area. Also, it’s a very expensive process. However, the goal is to develop an infrastructure that would allow greater quantities of the material to be produced more cheaply through economies of scale. In addition, the team needs to see what the properties of the metallic wood are, such as whether it dents or shatters when struck.

Another interesting potential of the technology is that the empty space in the metal could be filled with another material. Much as the pores in wood are used to hold living cells and transport water and nutrients, the metallic wood could be filled with materials that would act like, for example, a battery to produce things like a self-powered plane wing or prosthetic leg.

The research was published in Nature Scientific Reports.

(For the source of this, and many other interesting articles, please visit: https://newatlas.com/metallic-wood-nickel-titanium/58234/)