An international team of astronomers led by the University of Warwick has found a “forbidden” planet orbiting the “Neptunian Desert” of another star. Located 920 light years from Earth, exoplanet NGTS-4b is 20 percent smaller than Neptune, yet it retains an atmosphere despite being close enough to circle its star once every 1.3 days and having a surface temperature of 1,000° C (1,800° F).

The hunt for exoplanets keeps throwing out surprises and the latest is a planet that simply shouldn’t be where it is. The accepted wisdom is that planets the size of Neptune or smaller can have atmospheres when they are far away from their host stars, but are airless, rocky planets if they are close in because, unlike those the size of Jupiter and bigger, they haven’t enough gravity or powerful magnetic fields to counteract the heat and solar winds from a star at close range.

Discovered by the Next-Generation Transit Survey (NGTS) telescope array at the European Southern Observatory’s Paranal Observatory in Chile’s infamous Atacama Desert, NGTS-4b is a “forbidden” planet in that it is a Neptune-sized planet with a mass 20 times that of the Earth, it is close in to its star, but it still has an atmosphere. 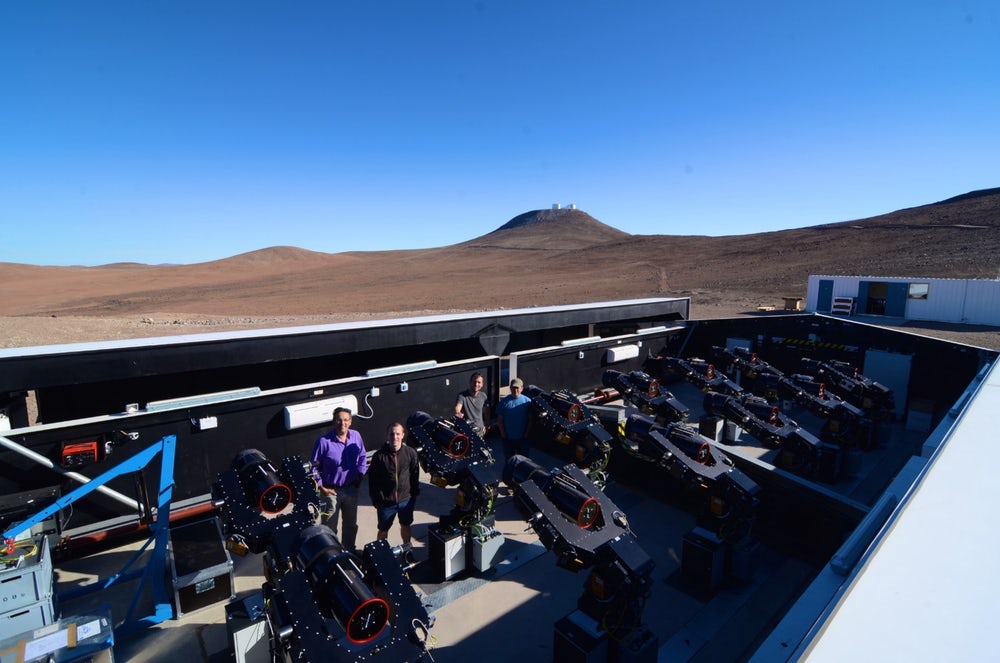 The Next-Generation Transit Survey telescope array that was used to find the “forbidden” planet. (Credit: University of Warwick).

It’s forbidden because it’s the first Neptune-like exoplanet with an atmosphere ever found that is situated in what is known as the Neptunian Desert. That is, the zone where such a world should be stripped of its gases and turned into a ball of rock. However, by studying the way its host star’s light dips as NGTS-4b passes in front of it, the team was able to determine that it alters the light curve by 0.2 percent instead of the more usual 1 percent, indicating an atmosphere.

As to why this is so, the most likely explanation is that either NGTS-4b only moved into its present orbit in the last million years, or it was once much larger and its atmosphere is evaporating.

“This planet must be tough – it is right in the zone where we expected Neptune-sized planets could not survive,” says Richard West of the Department of Physics at the University of Warwick. “It is truly remarkable that we found a transiting planet via a star dimming by less than 0.2 percent – this has never been done before by telescopes on the ground, and it was great to find after working on this project for a year.

“We are now scouring out data to see if we can see any more planets in the Neptune Desert – perhaps the desert is greener than was once thought.”

(For the source of this, and many additional similar articles, please visit: https://newatlas.com/neptunian-desert-forbidden-planet-warwick/59908/)