Interspersed among CVS’s glowing fluorescent aisles of laundry detergent, racks of Band-Aids, and over-the-counter digestion remedies, there are shelves of brightly colored cereal boxes. Windowed refrigerators full of milk cartons and microwavable frozen meals for one are within arm’s reach of displays stacked with popcorn, chips and salsa. For the past several years, pharmacies have been quietly stocking and selling more food to Americans who are drawn to one-stop shopping for their everyday essentials.

In 2017, CVS held a 3.9% share of the grocery market. Walgreens came in at 2.4%. That may not seem like much, but it far outpaced both Whole Foods and Trader Joe’s, which had 1.4% and 1% respectively. The eyebrow-raising figure probably comes down to an issue of scale – last year CVS and Walgreens each had close to 10,000 stores in the US, while Trader Joe’s and Whole Foods each had fewer than 500 locations. While the ubiquitous nature of pharmacies may help fill the grocery gap where affordable options are scarce, some researchers are concerned that this low-priced convenience comes with a high cost.

“We don’t hear about drugstore deserts – they are everywhere. But we do hear about grocery deserts,” says Michael Ruhlman, a chef turned author who recently wrote the book Grocery, a deep dive into the industry. “And there is a great irony in that food sold at the pharmacy – ostensibly a place meant to promote our health – is actually bad for you.”

Shelf-stable options tend to be highly processed and high in fat, sodium and sugar. Where they are the easiest option available, communities experience higher rates of chronic illness, like diabetes, heart disease and cancer.

“Access to food is clearly one of the major social determinants that impacts the risk of chronic disease and risk of obesity for low-income and racial/ethnic minority communities,” says the Stanford University health researcher Lisa Goldman Rosas. “I think the concern around the growing market share in pharmacies could really exacerbate some of those health disparities.”

Because grocery stores have low margins and are more at risk of shutting down in low-income areas, Rosas says, pharmacies drawing customers from other stores could contribute to even fewer options in the future. “This might create even more of these food deserts, or what people are now calling food ‘swamps’, where there is an excess of processed food and a lack of fresh produce available at accessible prices,” she says.

Countless studies show the direct relationship between food and deadly disease, but there’s less research on the role retailers can play.

“Highly processed food makes you sick,” says William McCarthy, an adjunct professor of public health at UCLA. “CVS and other pharmacies make money selling highly processed, long shelf-life foods, because it is all convenient.” But, he says, his research has shown that it’s not just about having more healthy options. 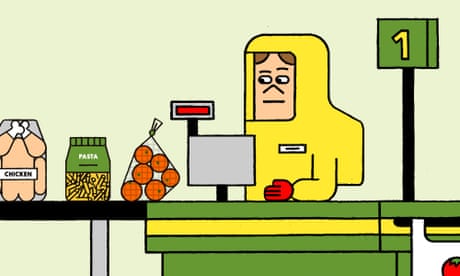 What banned substances might be hiding in your groceries?

In a 2016 study, researchers stocked corner stores in “food swamps” across East Los Angeles with affordable produce, hoping to test whether food retail interventions could be successful. They weren’t. While perceptions of the stores and community accessibility changed, patrons continued to purchase processed food instead of the fresh stuff.

“Simply making the fruits and vegetables available is not enough,” McCarthy says. “Part of the challenge is increasing the range of acceptable fruit and vegetable sources,” so that shoppers have exposure to produce that is familiar to them. His research indicates that people won’t buy what they don’t have experience eating or preparing.

Without that familiarity, processed food tends to win out over healthier options. A 2015 nationwide analysis found more than 60% of grocery buys were highly processed foods. Another study, by the University of Chicago last year, concluded that 91% of the nutrition gap between low-income households and affluent ones was driven by preference. 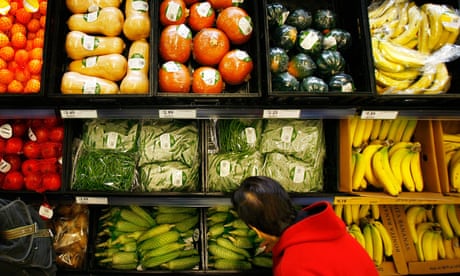 That’s why professor of economics at Ball State University and self-identified “bleeding-heart libertarian” Steven Horwitz, who has written about pharmacies’ growing market share, thinks the implications of the phenomenon are less worrisome. As he sees it, most grocery purchases that happen at CVS and Walgreens are piecemeal – that the big spending on food at these places collectively doesn’t mean individuals are shifting all their grocery shopping there. It’s a phenomenon called channel-blurring, and there’s evidence that shoppers will often rely on unexpected retailers for here-and-there items when it’s most convenient or cheap.

Where these pharmacies really count, however, are in the food deserts where there are severely limited options. “For some people, being able to grab that frozen dinner and take it home is for them the right tradeoff for their time and money,” Horwitz says.

Sylvia Soublet, a representative from Alameda county social services, agrees. Pharmacies play an important role in servicing low-income residents who live in the USDA-identified food desert in her district.

“When you have large entities like CVS and other pharmacies, that are offering some level of fresh food, stepping up to fill the void,” she says, “that really is an ideal situation. If it were not for those entities, our clients would be forced to rely on fast foods that are quick, less expensive, and even more processed.”

And, while pharmacy shelves are still stocked with junk food, they are also beginning to expand their offerings. Walgreens announced last year that it was testing out a new partnership with Kroger, launching “Kroger Express” grocery sections that include organic items inside 13 Kentucky locations, along with adding Kroger products to its online store.

CVS has also made moves to sell healthier fare. A representative of the company, which launched an initiative in 2014 to become the first pharmacy to quit selling cigarettes, indicated via email that they see food as the next frontier. While they declined to share specifics on how many healthy food products they sell or what percentage of stores carry them, the company claims in 2016 they “introduced more than 250 fresh, refrigerated and non-perishable healthier foods and snacks to select stores around the country”.

Still, the store admits to catering to its customers. “CVS does not believe in a ‘one size fits all’ approach to our stores; we look at the demographics, shopping habits, opportunities and what voids we can fill for our customers in key neighborhoods,” the representative responded in a statement.

To get retailers to stock healthy food options – in areas where shoppers rely on pharmacies or in those where grocery stores rule – effective policies at both national and local levels could focus more on increasing health awareness. Researchers have found that nutrition education, as well as increasing exposure of a wide variety of fruits and vegetables to children can have a big impact.

Obama-era regulations designed to improve access to healthy food for low-income families have stalled. As just one example, an addition to the 2014 farm bill that required stores to stock a larger number of staple foods was undercut by a proposal last month to count “canned spray cheese sauce” as one of them.

But popular demand for healthy options can still send a strong message to the market. “It is getting better – just as grocery stores got better,” the Grocery author Michael Ruhlman explains. “Our food gets better and better as we make smarter decisions. The more people talk about it, the more people know and think about good food, the more they buy that good food. Grocers want you to buy their stuff. They are not making any judgments. They will [sell] whatever you want – but it is up to us to tell them”.

(For the source of this, and many other important articles, please visit: https://www.theguardian.com/us-news/2019/jun/04/food-swamps-cvs-outsells-trader-joes-whole-foods-processed-shopping/)