Home
News
&
WEIRD HISTORY
All the President’s Humility: What We Can Learn From Young George Washington 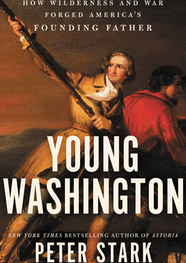 The Founding Father whom Americans revere as the incarnation of steady, selfless leadership – George Washington – was, in his early twenties, a remarkably self-centered young man.  This poses an interesting question:  Can today’s leaders – beginning at the top – make a similar transformation from self-centered to steady and selfless?  Or is it just too late?

After four years of immersing myself in George Washington’s life between the ages of twenty-one and twenty-six, what I find most surprising is not that he eventually grew to become a great leader.  Rather, it’s that he became a great leader despite where he started. As a young man this guy was a mess.

Washington is certainly not the first young man to be selfish, egotistical, vain, thin-skinned, ungracious, whiney, petulant, and brazenly ambitious.  Most young men who feel underappreciated, however, don’t quit or threaten to quit their job at least seven times in the first few years.  Nor are most obsessed with their best friend’s wife.  Nor do most twenty-somethings inadvertently set off a global war.  What distinguishes George Washington’s youthful follies in the 1750s is that his relentless ambition happened to coincide with the many unsettled territorial claims to North America, creating a volatile mixture.  As it combusted, his youthful self-centeredness played out on a stage that quickly expanded from local, to regional, to international – with disastrous consequences.

From his mid-teens onward, Washington’s ambition shows.  It accelerates to a relentless upward clawing as he enters his twenties.  His father, Gus, had died when George was eleven, setting back George’s prospects for a secure future.  As a younger son in a fourth-generation family of middle-level Virginia tobacco planters, George, unlike his older half brothers, was not sent off to Britain to receive a polished boarding-school education, nor did he inherit enough land from Gus to support himself.  After his forceful and cantankerous mother, Mary Ball Washington, shot down his plan at age fourteen to go to sea, George, needing a way to make a living, polished up his father’s old surveying instruments, taught himself to operate them, and set himself up as a freelance surveyor.

By age eighteen, he’d earned enough money to start buying his own pieces of frontier land beyond the Blue Ridge Mountains.  By age twenty-one, still not rising fast enough in the Virginia aristocracy to sate his driving ambition, Washington took a part-time post in Virginia’s colonial military and volunteered for a dangerous winter mission.   He was to carry a message from Virginia’s British governor, Robert Dinwiddie, over the Appalachian Mountains and deep into the Ohio wilderness, delivering it to the commandant of a newly built French fort.

The message said in essence, Stay out! All these lands belong to King George.

This launched Washington on five years of harrowing adventures in the Ohio wilderness, its dangers further fueled by his heedless push to make a name and his almost utter lack of experience.  He came within an inch of dying on that first mission – pitched off a makeshift raft into an icy river then nearly freezing to death during the frigid night on a snowy island.  On his second mission into the wilds he rashly ambushed a French diplomatic party that was breakfasting in a wooded glen.  Not surprisingly, this triggered a massive retaliation by hundreds of French soldiers and Indian warriors, during which Washington’s outnumbered men perished in a pouring rain in blood-and-mud-filled trenches.  He had to surrender (although he refused to use that word) the claptrap fort he had thrown together, appropriately named Fort Necessity for the desperate circumstances he had created for himself and his troops.  This resulted in deep humiliation for the British Empire and its authorities in London, touching off tensions that exploded into the French and Indian War (and spread to Europe and around the globe as the Seven Years War).

Young Washington fervently wanted a British Royal Army officer’s commission – instead of his much less prestigious Virginia colonial commission – and he rode great distances to petition various aristocratic British generals to give him one. But he was a hayseed by their standards, an uneducated rube, and a military loser besides.  He was never granted a “king’s commission,” cementing his lasting resentment toward the British whom he felt treated him as second class.

He is mostly remembered today, of course, as the immortal embodiment of sound leadership. So how does one evolve from a festering mass of insecurities and perceived injustices to become a great leader? Not easily, and not all at once. It took Washington many years to metamorphose from self-centered, impetuous young man burning with ambition to gain personal “honor” into a steady, selfless, seemingly unflappable leader.

Yet one catches glimpses from his early twenties that hint at what he might become – transformative moments that show a young man beginning to extend his emotional and intellectual reach beyond himself.  There is a moment when he literally gets down off his high horse – the living embodiment of a Virginia gentleman’s status – and walks the muddy trail beside his men, freeing the animal to haul armaments over a steep mountain pass.  He shows an almost desperate sense of helplessness when Virginia frontier settlers, whose safety has been entrusted to his care, plead with him to save them from roving bands of Indians who scalp their loved ones and burn their homesteads, offering to give his life to save theirs if only it would help.  One senses in these moments his growing empathy for the plight of others.  As a young aide-de-camp to British General Braddock, he barely survives the wilderness ambush by Indian warriors and French soldiers of a large column of the general’s Redcoats.  Washington’s narrow escape from death was marked by the multiple bullet holes through his coat and hat.

“[T]he miraculous care of Providence,” he wrote his younger brother after the battle, “…protected me beyond all human expectation….”

Implicit in this remark is that Providence may have chosen him for some greater role. Perhaps his destiny is not simply all about George Washington.

One sees steps toward a more mature style of leadership.  After he makes a series of heedless blunders in his rush to prove himself in his first engagements, Washington learns to listen carefully to intelligent and trusted advisors and weigh their words judiciously before making a decision.

Young George Washington was not immune from his own era’s culture of voluble denial and dexterous shifting of blame, the same that besets us today.  He initially denied his mistakes or obfuscated his moments of failure.  The surrender of Fort Necessity comes to mind, when the twenty-two-year-old colonel’s less-than-complete public recounting of the bloody debacle reads as if his forces and the French simply agreed to stop fighting and walk away, rather than the reality of a slaughter leading to Washington’s forces’ surrender and signed documents to that effect. 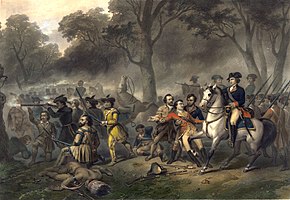 Washington the Soldier – Painting of Lt. Col. Washington on horseback during the Battle of the Monongahela — Reǵnier, 1834

As he grew older, he learned to cultivate his image and project a sense of dignity. Many commentators have remarked that he seemed to see himself as an actor on a stage.  He rarely revealed his deepest emotions, at least in public. But as he matured into leadership he clearly learned to accept his failures, take responsibility for them, and acknowledge his own human frailty, if sometimes only to himself and his beloved Martha.  When, at age forty-three, he was asked by the Continental Congress in June of 1775 to command the newly formed Continental Army against British forces, Washington responded, “…I this day declare, with utmost sincerity, I do not think myself equal to the command I [am] honoured with.”

What leader would say that today?  Who has that kind of humility?  Maybe it’s simply too late for most of our current leadership.  Self-centeredness and driving ambition have always played a role among American politicians.  One wonders, however, if today those qualities are amplified in our leaders – even encouraged – by instant polling, social media accounts that precisely measure “popularity” by counting followers or hits, and a media environment that thrives on volatile, off-the-cuff political commentary.   Is it just too hard for our leaders to embrace humility in that churning vortex, to acknowledge their own weaknesses?

Or do the lessons of humility have to come from somewhere far deeper, a place where the penalties for arrogance land far more severely?  Amid all the noise among our leaders today – the posturing, the blaming, the denying – how powerful are the consequences of self-centeredness and ambition, how immediate, how graphic, how frightening?

The young George Washington, by contrast, suffered horrendous consequences for his self-centeredness and driving ambition, such as seeing his dead comrades-in-arms sprawled in the bloody trenches of Fort Necessity.  While rain cascaded down and darkness fell, it was a sobering reality.

Much later in life, during his presidency and after, Washington worried about extreme partisanship literally tearing the young nation into pieces.  Maybe we as a nation nearly two-and-a-half centuries later have felt invulnerable in our unity – fearing no consequences for our sniping fractiousness – until suddenly we find that unity shattered into unfixable, razor-edged shards.  Washington did not take unity for granted, in the least.  As commander-in-chief of the Continental Army and then as president, he understood that the greatest task facing him was not to enhance his stature but to unify the troops, then the nation.  The battering he received in his early twenties in the Ohio wilderness helped him arrive at this realization.  He learned – in the hardest way – that it was not only about him.  It was about everyone.  He learned to settle his anger, open his ears, subsume his hefty ego to a greater good.

In Washington’s era, as today, much of the responsibility for leadership fell on the citizenry and their honesty with themselves.  They could see the man and judge him for what he was.  He learned to welcome that, instead of ducking from it.  Washington’s growing self-assurance allowed him to acknowledge his own weaknesses and imperfections and, as a result, maintain his dignity rather than assuming a reflexive position of bluster, muscle-flexing, and blame.  Those who looked to him for leadership recognized his humility as a sign of wisdom and strength.  They saw a leader who was sincerely trying to do his best for a struggling nation.  They rallied behind him.  When they did, his humility ultimately became a source of the citizenry’s wisdom and strength.

Peter Stark is the author of the New York Times bestseller Astoria, along with The Last Empty Places, Last Breath, and At the Mercy of the River. He is a frequent contributor to Outside Magazine, has written for Smithsonian and the New Yorker and has been nominated for a National Magazine Award. His most recent book is Young Washington: How Wilderness and War Forged America’s Founding Father. He lives in Montana with his wife and children.

(For the source of this, and many other quite interesting historical-related articles, please visit: https://historynewsnetwork.org/article/172009)