A new study highlights the secondhand effects of drinking, arguing that higher taxation could curb problems.

We certainly have strange definitions of freedom. Often the “freedom” one takes in smoking a cigarette, for example — “It’s my body” “It’s my right!” — comes into question when considering those suffering from secondhand smoke. How is it freedom when innocent bystanders are harmed?

In this case, cause and effect are observable: carcinogens are exhaled into the air, cancer rates increase. Alcohol is different, or so many believe. Some think the only damage being done is to the drinker’s liver, breath, and temperament. Yet, as a new study, published in the Journal of Studies on Alcohol and Drugs, shows we need to reckon with the secondhand effects of alcohol.

Pulling data from two phone surveys in 2015, representing 8,750 adult men and women (of varied races; 40.7 percent were white), the team discovered that 21 percent of female and 23 percent of male respondents have suffered consequences due to someone else’s drinking. Extrapolating from there, that equates to roughly 53 million adults being harmed every year.

The secondhand harms of drinking impact 1 In 5 adults, study says

The authors, from the Public Health Institute in Emeryville, California, and the University of North Dakota, label alcohol as a significant public health issue due to the secondhand effects of heavy drinkers, which they define as five or more drinks for a male, four for a female, at least once a month. Overall, they state that the societal costs of drinking are double what drinkers themselves encounter.

Race or ethnicity did not play a factor in females, though in males, blacks, hispanics, or “other” races reported higher rates of Alcohol’s Harm To Others (AHTO). Respondents that were never married also reported higher instances of AHTO, though the prevalence of children in the household does not appear to be a factor. Employed women reported higher levels of AHTO than unemployed women.

In a commentary on the study, Boston Medical Center’s Timothy Naimi raises a critical eye to alcohol’s effects, discussing the importance of recognizing what freedom actually entails.

“[T]he freedom to drink alcohol must be counter-balanced by the freedom from being afflicted by others’ drinking in ways manifested by homicide, alcohol-related sexual assault, car crashes, domestic abuse, lost household wages, and child neglect.”

Naimi writes that the secondhand effects of alcohol have been underreported; they need to be considered when deciding on alcohol control policies. He calls for “structural, environmental interventions” to reduce excessive drinking, especially in light of the fact that 40 percent of alcohol-related deaths are not the drinker’s. He proposes increasing taxation on alcoholic products, which has been shown to reduce over-drinking. 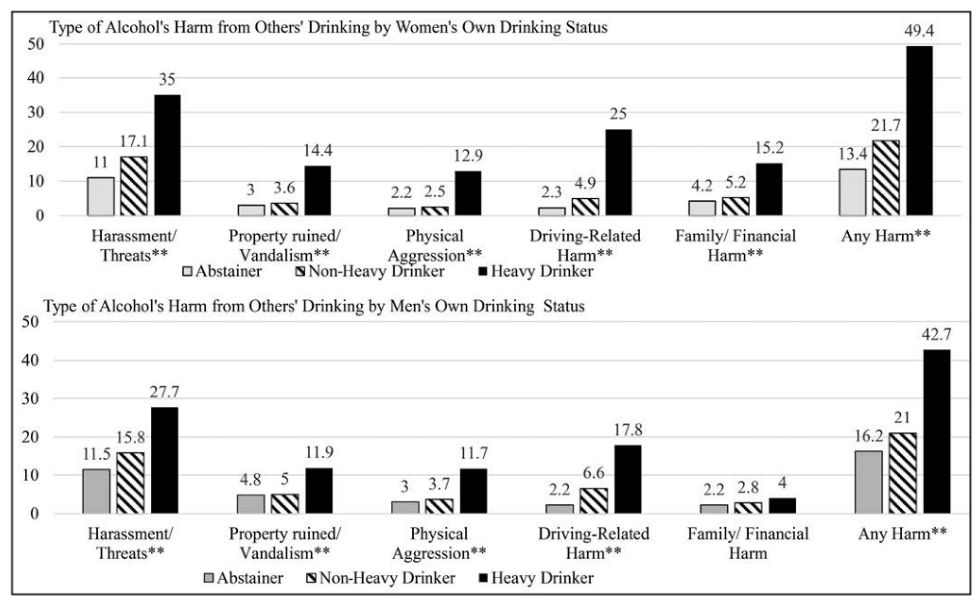 Sven Andréasson, a Stockholm-based doctor, offers an even more aggressive second commentary. He notes that many nations legislate specifically to reduce the secondhand effects of drinking, not only in traffic laws, but also through the enforcement of tough domestic and neglected child policies. He finds it unthinkable that some countries still use .08 percent blood concentration level as the legal designation for being drunk when that number results in a far higher death rate than the .05 percent limit other countries enforce.

He does not mince words:

“When combining harms to the users with harms to others, alcohol again scores highest, ahead of tobacco, heroin, cocaine, and other substances. What is striking about alcohol is its global toxic impact: on virtually all organs of the body as well as on most sectors of society. Health, education, transportation, agriculture, trade, and so on — all need to address the impact of alcohol.”

Public Health Institute researcher Madhabika B. Nayak, lead author of the study, agrees with these assessments. To mitigate risk to the innocent, she advocates for higher taxes and stronger enforcement policies, concluding,

“Control policies, such as alcohol pricing, taxation, reduced availability, and restricting advertising, may be the most effective ways to reduce not only alcohol consumption but also alcohol’s harm to persons other than the drinker.”

(For the source of this article, and to watch a video associated with it, please visit: https://bigthink.com/surprising-science/alcohol-secondhand-effects/)