At least one species can switch from female to male within ten days.

For the majority of organisms, sex is not something that can be changed. This is not true, however, for a fish called the bluehead wrasse. These fish can go from female to male, complete with sperm-making testes, within a matter of ten days. In a study published recently in Science Advances, scientists explain, for the first time, how this sex-shifting fish is able to exist in this state of sexual plasticity.

When a dominant bluehead wrasse male is removed from his Caribbean coral reef home, the behavior of the biggest female in his harem will change within minutes; her color within hours. In a little over a week, the once-yellow female becomes a blue male. This physical upheaval, the team writes, all comes down to a sudden shift in genetic activity, and it comes with a big reproductive benefit.

The authors say their finding can lead to a better understanding of how sex is determined and maintained through complex networks of genes. Sexual fate, they write, “may be inherently plastic in all vertebrates” — not just in sex-changing fish. 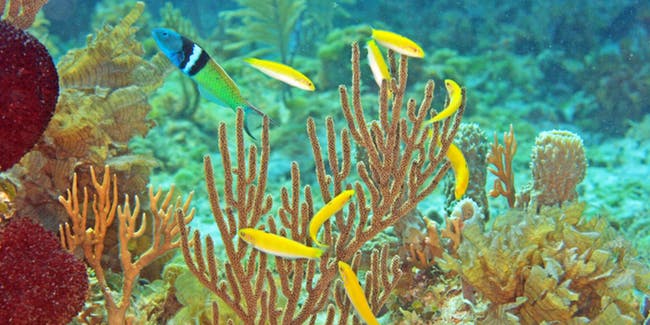 In their study, the scientists removed male bluehead wrasses from their established social groups on patch reefs off the Florida coast, in turn inducing sex changes in the wild females. Over the next eight to 10 days, they collected the females and took samples from their brains and gonads, using RNA sequencing to measure differences in gene expression.

While they didn’t observe any difference in the gene expression in their brains, the cells in the gonad samples were different, depending on the stage of the sex change process.

“Genes needed to maintain the ovary are first turned off, and then a new genetic pathway is steadily turned on to promote testis formation,” says Todd.

The team found that the process begins when a gene responsible for making estrogen called aromatase is turned off. The mechanism explaining why it turns off is still a mystery, but it’s hypothesized that it’s connected to the stress of losing the dominant male.

Stress likely elicits rapid signaling changes in the neurotransmitters of the fish, triggering the repression of the aromatase gene, the death of germ cells, and promotion of androgen synthesis. (Androgens are hormones that play a role in male traits and reproductive activity). As a result, levels of a hormone called isotocin increase — causing the once-female fish to become more aggressive and territorial.

Co-lead author and Ph.D. candidate Oscar Ortega-Recalde says that this phenomenon is also possible because of changes in cellular “memory.”

“Chemical markers on DNA control gene expression and to help cells remember their specific function in the body,” he says. “Our study is important because it shows that sex change involves profound changes in these chemical marks.”

Sometimes other factors are involved in sex change. Other animals, like dragon lizards and zebrafish, switch sex after experiencing a change in temperature.

The biological “cost” of going from one sex to the other is very low. What the animal gains — a better reproductive future — is essential. The real puzzle, scientists report, is why the change doesn’t happen more often.

(For the source of this, and many other important and interesting articles, and to watch a couple of videos associated with it, please visit: https://www.inverse.com/article/57524-animal-sex-switch-bluehead-wrasse/)