In a demonstration that less can be more, EPFL scientists are working on simple robots that behave and cooperate like ants. The 10-g (0.35-oz) Tribots are simple, tetherless, reconfigurable three-legged robots that are folded like origami, but have the ability to be assigned roles and work together on complex tasks as they jump and crawl over uneven terrain.

The ant’s ability to team up with others of its kind to achieve impressive results is so well-known that for millennia its colonies have been a metaphor for both the perfect society and the ultimate collectivist nightmare. It’s also a creature that’s easy to try to think of in human terms by imagining that each individual ant has some idea of what it’s doing and that someone (if that means anything to an ant) knows what’s really going on in the grander scheme of things.

In fact, in an ant colony, none of the individuals really have any idea what they are doing on a larger scale. Instead, each one understands about four instructions in what is remarkably similar to a computer algorithm. Each ant is programmed to respond in certain ways if certain things happen. Why? They have no idea, but when they get together they can build intricate structures both below and above ground, wage wars, and even run tiny farms.

It also explains why they often act like idiots when they do things like trying to haul a crumb over the top of a stalk of grass or keep shifting sand grains to one pile, only to have other ants shift them back again. 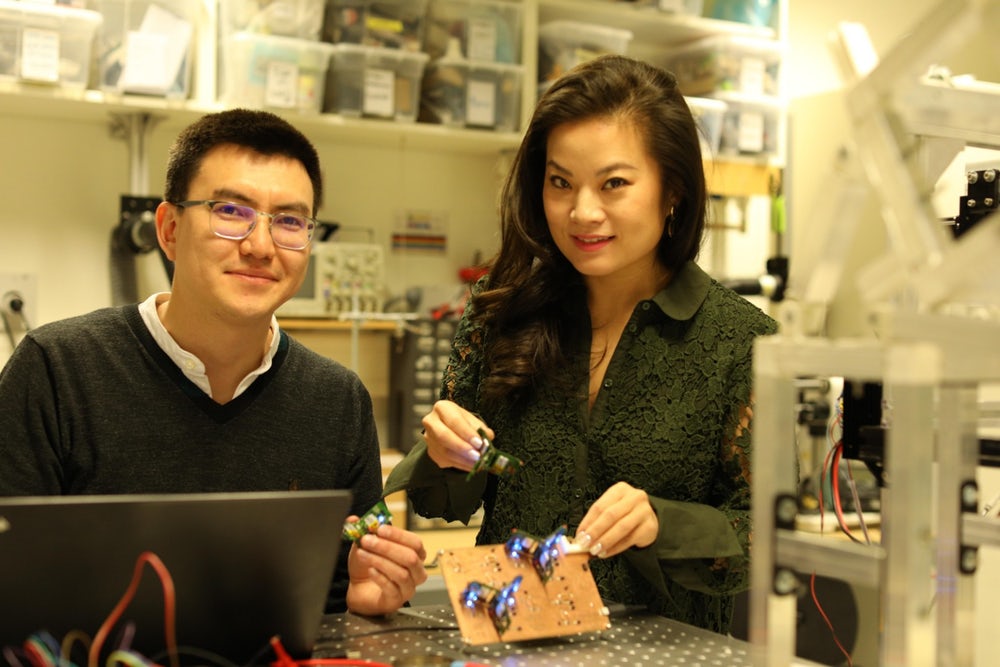 What robotics researchers led by Zhenishbek Zhakypov and Jamie Paik are working on is to take this formidable ability and install it in small robots that they claim can be mass-produced by folding them from stacks of thin, multi-material sheets. These Tribots have multiple locomotion modes that allow them to negotiate obstacles as well as infrared and proximity sensors for detection and communication.

“Their movements are modeled on those of Odontomachus ants. These insects normally crawl, but to escape a predator, they snap their powerful jaws together to jump from leaf to leaf,” says Zhakypov.

By using multiple shape-memory alloy actuators, the Tribots can mimic this catapulting action so that they can jump vertically and horizontally, somersault, walk, and crawl. In addition, the Tribots can be given robotic social “roles” the same as flesh and chiton ants. Some can be configured as explorers to look for physical obstacles and then tell others in their group, while others can be leaders that give orders, or workers, who operate cooperatively to move objects much bigger than themselves. According to Paik, these roles can be changed at a moment’s notice to suit the task at hand – something that real ants can’t do.

The team says that the Tribots have a number of applications, such as in emergency search and rescue operations, where they can be deployed in swarms to scout devastated areas much faster than larger individual robots, without needing GPS or vision.

“Since they can be manufactured and deployed in large numbers, having some ‘casualties’ would not affect the success of the mission,” says Paik. “With their unique collective intelligence, our tiny robots can demonstrate better adaptability to unknown environments; therefore, for certain missions, they would outperform larger, more powerful robots.”

The research was published in Nature and the video below shows the Tribots in action.

(For the source of this, to watch a video associated with it, and to read many other interesting articles, please visit: https://newatlas.com/tiny-ant-tribot-robots/60524/)