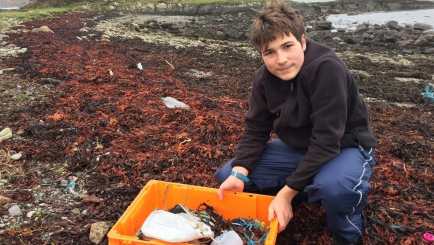 An Irish teenager has won the 2019 Google Science Fair for developing a method to remove microplastics from water. The idea came to 18-year-old Fionn Ferreira when he was kayaking and spotted a rock covered in bits of tiny plastic near his home in West Cork, Ireland.

So, for his project, Ferreira added oil and magnetite powder to water containing microplastics, defined as plastic bits 5 millimeters or smaller. (Magnetite is a naturally occurring, non-toxic iron oxide.)

This created a ferrofluid that combined with the microplastics, which are non-polar and “find it easier to go into suspension with the oil than remain suspended in the water,” Ferreira wrote. Because ferrofluids are magnetized, Ferreira was able to use a magnet to extract the oil-magnetite-microplastics combination.

Ferreira hopes to scale his method for use at wastewater treatment facilities, where it would hopefully remove microplastics from wastewater before it makes its way to the oceans. Ferreira will receive $50,000 and STEM-related educational opportunities for winning the science fair, which Google has held annually since 2011.

Microplastics now pollute virtually all the world’s ecosystems, posing a threat to marine life and, therefore, the humans who eat fish. In March, researchers at Bangor University described finding microplastics in every lake, river and reservoir they examined.

“It was startling. I wasn’t expecting to find as much as we did,” Christian Dunn at Bangor University, Wales, who led the work, told The Guardian. “It is quite depressing, they were there in some of our country’s most iconic locations. I’m sure Wordsworth would not be happy to discover his beloved Ullswater in the Lake District was polluted with plastic.”

Microplastics exist not only in shallow waters and on the ocean surface in giant garbage patches, but also in seemingly large quantities in the deep ocean. So, while trapping microplastics at wastewater treatment facilities or corralling plastic and garbage with massive nets might slow pollution, Ferreira has a bigger strategy in mind.

“I’m not saying that my project is the solution,” he told Business Insider. “The solution is that we stop using plastic altogether.”

(For the source of this, and many other important articles, and to watch the video associated with it, please visit: https://bigthink.com/surprising-science/microplastics-google-science/)