Turning salt water into fresh water with the power of the sun. 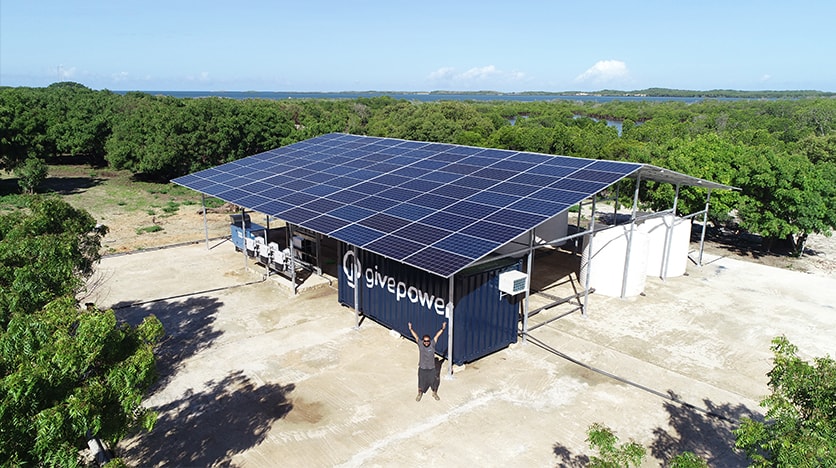 We are only at the beginning of an increasingly more perilous worldwide water crisis. The ability to turn seawater into drinking water will be able to turn the tides on this problem before it grows.

Desalination on an industrial scale would change the world.

We may be witnessing the first instances of a viable and scalable desalination effort. At a newly constructed solar-powered desalination plant in Kenya, a nonprofit called GivePower has been able to provide fresh water to thousands. The desalination plant opened up on the coasts of Kiunga in July 2018, and today it’s capable of creating 19,800 gallons (75,000 liters) of drinking water each day. That’s able to support around 25,000 people.

Hayes Barnard, the founder and president of GivePower, is taking his experience from the solar field and applying it to fresh water source crises.

“Humanity needs to take swift action to address the increasingly severe global water crisis that faces the developing world,” he says. “With our background in off-grid clean energy, GivePower can immediately help by deploying solar water farm solutions to save lives in areas throughout the world that suffer from prolonged water scarcity.”

GivePower started off in 2013 as a nonprofit branch of SolarCity, Elon Musk’s failed solar-panel company that was eventually absorbed into Tesla in 2016. Barnard spun off GivePower into its own organization before the merger.

He spent almost two years in San Francisco building the machine, he hopes the technology could one day reach the more than two billion people who live in water-scarce areas. The nonprofit works mostly on building solar-energy power plants that provide electricity all across the developing world.

According to GivePower, they’ve “already deployed more than 2,650 solar-powered energy systems to schools, medical clinics and villages in 17 developing countries GivePower is focusing its efforts on the most critical use case of sustainable energy: reliable access to clean water.”

The Kiunga facility initially cost $500,000 to build and took one month to construct. They hope to generate $100,000 per year from the plant, and then funnel that money into building new facilities. The eventual goal is to cut costs to $100,000 per solar-powered desalination plant in the future. Barnard hopes that the systems will fund each other to create an additional system every five years.

Part of their initial funding came from a $250,000 grant by Bank of America last year.

Access to the system comes from people using the M-Pesa payments app. Locals only have to pay a fourth of a cent for every liter of water. Barnard points out that this is astronomically less than what is usually $1 per liter from premium water brands.

The installation in Kiunga has already made a lot of headway and fundamental change for the people living there.

It’s been found that limited access to fresh drinking water keeps women out of the educational system. According to a report by the UN Commission for Human Rights, women and children in Africa and Asia must walk an average of 3.7 miles a day to procure water.

The UN states that “between 50 and 100 litres of water per person per day are needed to ensure that most basic needs are met and few health concerns arise.”

This is why Barnard thinks that it’s so crucial to bring water directly to them. The ongoing climate crisis will only make these types of solutions more crucial for affected communities .

GivePower hopes to establish a local thriving community around these new fresh water sources. One that’ll encourage health, safety and even commerce. Already, Barnard has seen a group of women that have started a freshwater clothes washing service. It’s his hope and intention that this spurs economic activity for women and affects the community at large.

The ingenious technology of solar powered desalination may just be the panacea for the growing water crisis. Once basic human needs are met, these water-scarce regions would not only survive but eventually flourish.

OTHER Articles FROM BIG THINK

(For the source of this, and many other important articles, please visit: https://bigthink.com/technology-innovation/solar-power-desalination/)