A resourceful teenager has taken the rise of increasingly powerful smart home devices to its logical conclusion – tweeting from her family’s smart fridge after her mother confiscated her phone.

The 15-year-old Ariana Grande fan known only as “Dorothy” was barred from using her phone but managed to find a number of innovative ways to reach her thousands of followers – a handheld Nintendo device, a Wii U gaming console and, finally, her family’s LG Smart Refrigerator.

I do not know if this is going to tweet I am talking to my fridge what the heck my Mom confiscated all of my electronics again.

21.2K people are talking about this

Dorothy, who declined to share her last name, says her mother disciplined her two weeks ago after she got too distracted while cooking and caused a fire.

“She took all my tech so I’d pay more attention to my surroundings,” said the teen, who messaged the Guardian from her cousin’s iPad because she was still facing a tech ban. “I felt mortified! I was worried because I’ve been bored all summer and Twitter passes the time for me.” 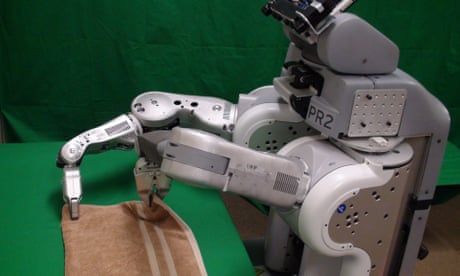 Drunken droids and solar-powered shirts: what the smarthome will look like  –  Read more

The user was worried about losing her “mutuals” – accounts she follows that follow her back – and devised other ways to get tweets out. Her self-described “fan account” is used primarily to send tweets about Ariana Grande.

After sending a tweet saying her mom had taken her phone, another tweet was published, seemingly from her mother, stating: “I seen [sic] that Dorothy has been using twitter on her Nintendo. This account will be shut down now.”

hey guys omg. my mom is at work so i’m looking for my phone. wish me luck. lov u #Mii #MiiMaker #WiiU

3,922 people are talking about this

Dorothy then sent a tweet saying: “my mom took my phone and my nintendo ds so i have no choice but to use my wii … thank u all for the support and love.” The tweet’s source label, which indicates the device from which a tweet was sent, confirmed that the tweet came from a Wii U.

Finally, after her mother apparently took her Wii U away as well, she sent a tweet from her LG Smart refrigerator: “I’m talking to my fridge what the heck,” she said.

LG did not respond to request for comment, but its website confirms the refrigerator does have social media capabilities, and the tweet source confirms it was sent from the device.

After the saga went viral, with more than 12,000 retweets, Twitter itself stepped in and joined the calls for Dorothy to be returned to the internet, tweeting “#FreeDorothy”.

Dorothy did not answer questions regarding how long she will be grounded. “I may be late to reply, as it is difficult to find something to use Twitter,” she told the Guardian.

(For the source of this, and many other interesting articles, please visit: https://www.theguardian.com/technology/2019/aug/13/teen-smart-fridge-twitter-grounded/)