An infographic map made by Czech linguist, mathematician, and artist Jakub Marian has described the most popular surnames in Europe.

For example, the most popular surname in the United Kingdom is Smith, deriving from the metalworking practice, compared to Müller in Germany, which means ‘miller’.

He has produced two maps.

One which shows the most common surnames… 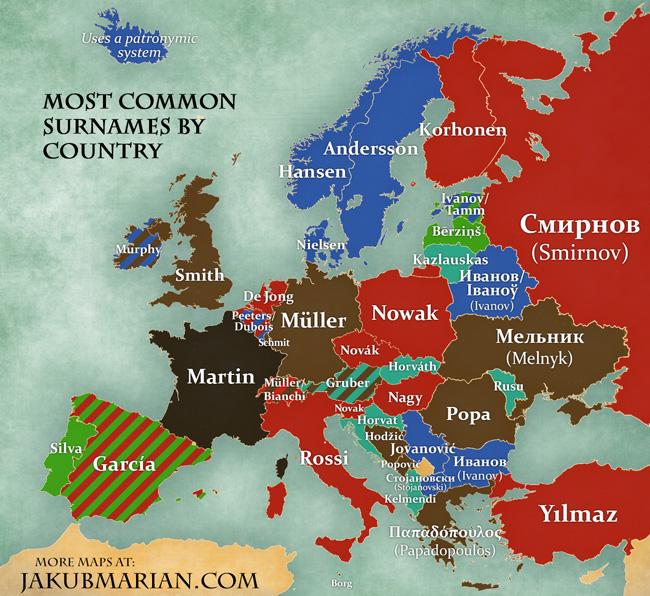 …and another describing the meanings behind them: 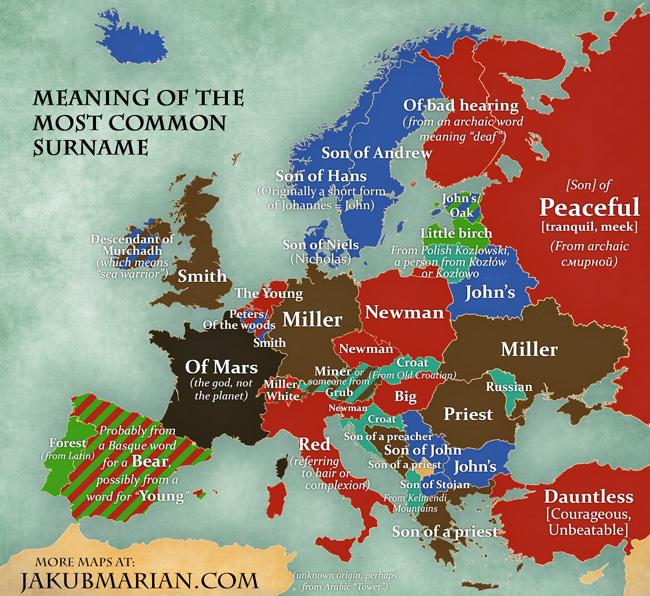 Marian told indy100 about his process for creating the maps:

“I basically spent many hours Googling, trying to find statistics in a language I speak (because I obviously cannot speak every language represented in the map), and searching in dictionaries.”

“A Wikipedia article was my starting point, but many of the entries either do not have a source or are just plain wrong, so I always sought to find primary sources.”

Then when Marian found the correct names, he had to find appropriate translations, which he did through research online and through etymological and genealogical dictionaries.

Unfortunately, most of what one can find on the Internet is incorrect or incomplete in one way or another, and a few minor errors (or, more precisely, incomplete entries) slipped into the map as well.

This is where having a following from all over the world is very helpful, and my readers quickly pointed out inaccuracies and referred me to relevant sources in their local languages.

Jakub told indy100 the most interesting finding, to him, was that Iceland still operates under a purely patronymic system.

It’s a system where the last name of a child is determined by the first name of its father, and it is the only western country that has not switched to the family name system we are all familiar with.

Centuries ago, this system was common in all Nordic countries, as a result of which almost all family names in Denmark, Norway, and Sweden end with -son or -sen, the equivalent of “son” in English.

Another thing that I find quite amusing is that the most common surname in Slovakia is the Hungarian word for a Croat, which is in turn a borrowing from Croatian. Oddly enough, there are 30 times more people with ‘Croat’ in their name than ethnic Croats in Slovakia.

(For the source of this, and other interesting articles, please visit: https://www.indy100.com/article/this-map-shows-the-most-common-surnames-in-europe–ZJmbZILQ51W/)