If George RR Martin could be granted one wish, it would be for more time. The bestselling author of the Song of Ice and Fire saga, the books that became television phenomenon Game of Thrones, is in London for a talk with historian Dan Jones about his most recent work, Fire and Blood, an imagined history of the Targaryen family (the all-conquering ancestors of dragon queen Daenerys), before heading to the science-fiction event Worldcon in Dublin.

Yet, at the back of his mind, is the work still to come. The Winds of Winter, the sixth and penultimate book in Ice and Fire, has to be finished and the seventh, A Dream of Spring, to be written. Then there’s a couple of Dunk and Egg stories set in the same world to complete. (Lighter in tone, he saw them as palate cleansers between “the big mega-books” but then “fell behind with everything, so now I’m just trying to think about the next thing immediately in front of me”.)

And that’s before the many television projects that have sprung up thanks to the success of the series. A number of prequels set in Westeros – including one written by Jane Goldman, which is “set 5,000 years before the events of Game of Thrones” and currently in post-production – a TV version of the Wild Cards anthology series, which he edits, and an adaptation of Nnedi Okorafor’s Who Fears Death, which he is producing for HBO.

“I need more hours in the day and more days in the week and more months in the year because the time does seem to go very fast,” he admits with a weary smile.

Such weariness is fleeting, however. Before we meet, I’m told there are certain things Martin won’t discuss: the controversial ending of the television series earlier this year; when The Winds of Winter will arrive; and his health – he is 70 and the internet is full of speculation about whether he will manage to finish his epic tale.

As it turns out, the genial Martin touches on aspects of all three subjects, although, clearly wary of generating negative headlines, he bats away a question about whether he’d watched the show’s final episode with a firm: “We shouldn’t talk about that.”

He agrees, however, that the end of the series has relieved a great deal of pressure. “There were a couple of years where, if I could have finished the book, I could have stayed ahead of the show for another couple of years, and the stress was enormous,” he says. “I don’t think it was very good for me, because the very thing that should have speeded me up actually slowed me down. Every day I sat down to write and even if I had a good day – and a good day for me is three or four pages – I’d feel terrible because I’d be thinking: ‘My God, I have to finish the book. I’ve only written four pages when I should have written 40.’ But having the show finish is freeing, because I’m at my own pace now. I have good days and I have bad days and the stress is far less, although it’s still there… I’m sure that when I finish A Dream of Spring you’ll have to tether me to the Earth.”

It’s clear that he has a complicated, and arguably unresolved, relationship with the television series. On the one hand, it “completely changed my life” – yet, as he says, “they’re not the same thing, although they are very closely related to each other”. When asked whether the show’s ending – which received mixed responses from both critics and fans – affects his own, he is clear. “No, it doesn’t. It doesn’t change anything at all… As Rick Nelson says in Garden Party, one of my favorite songs, you can’t please everybody, so you’ve got to please yourself.”

Such thinking lies behind Fire and Blood, which came from his desire to “replicate popular histories… the pageants, wars, conquests, marriages and feuds” – although he acknowledges that not every fan is as happy to spend time wandering down Westerosi byways. “Westeros has become very big, and I know that that frustrates some of my fans, who would rather I just keep to the main storyline as they see it, which is the seven-book Song of Ice and Fire. But almost from the first I’ve seen other possibilities, other stories that are buried there.”

He smiles and admits it was ever thus. As a child he started endless stories that he never finished “because I would have this vision in my head but, when I started to put it down on paper, I struggled to find the words and it would become mundane and ordinary and not nearly as much fun”. Later, he notes tellingly of his time in television and film in the mid-80s that he always loved his “big, untidy, expensive first drafts” far more than the pared-down and polished up work that was acceptable to the studio executives.

A Song of Ice and Fire was famously written in response to all those studio notes. A sprawling series filled with “gigantic castles, an extremely complicated plot, direwolves and dragons” that could never be filmed. “And because life is full of little ironies and gods of mischief it was this work that’s impossible to be filmed that went on to become the most popular television show in the world.”

Did he find that, as the television series grew, the Westeros created on screen bled into his? “For the average viewer, and I recognise this, Tyrion Lannister will always be Peter Dinklage from this point forward. But it did not work that way for me. I started writing these books in 1991 and [by the time the series started] I’d been with these characters for 20 years. I had them fixed in my mind.”

What did impress him, however, was how those who had read the books kept the saga’s secrets. “The way in which no one spoiled the Red Wedding is one of the biggest stories in the history of television because there were literally millions of book readers who knew what was coming and they gave nothing away. Instead, they did something which I didn’t expect either – they recorded the shock and dismay of their loved ones.” He laughs. “Suddenly, there were videos all over the internet of people reacting to the Red Wedding, all set up by their relatives who wanted to capture the grief and shock of their husbands, wives, siblings… Has that ever happened in the history of television? Not as far as I know.”

Martin clearly loves these moments of intense interaction with the material. He talks fondly of an evening when he and his wife, Parris, went to a dinner with fans in Spain. It was long before the existence of the TV series, when A Song of Ice and Fire was just beginning to take off and “they all broke into a Spanish version of [a song from the books] The Bear and the Maiden Fair. They were pounding the table and singing, and they all knew the lyrics. It was amazing. I loved that experience.”

He loved too the interaction with fans. In my 20s I spent a fair amount of time on one of the main sites dedicated to the books, and one of the things that most filled me with jealousy reading far away in England were the breathless reports from the Brotherhood Without Banners, a small group of devoted fans who would go to conventions, meet GRRM (as they referred to him), share drinks and, if they were lucky, get knighted by him, sometimes it seemed with breadsticks.

There is an air of melancholy when he talks about that time now. “When I first went to a Brotherhood Without Banners party there would be a few dozen people there, and I became quite friendly with some of them,” he says. “And every time I attended I would meet new ones and spend time with them and run trivia contests for them. It was great but, as the books became more and more successful and then the show became a hit, so the parties became bigger and bigger and more and more crowded.”

He looks wistful. “They still have those parties and they’re still great, and I’m still friendly with the people I met back in 2001 and 2002, but I can’t meet the new people any more because there are too many. I’m sure they’re just as delightful as the old people, but I don’t want to go to a party where an unending succession of people want to take selfies with me, because that’s not fun the way it was in the old days. That’s work.”

Does he miss those early days? There’s a long pause and then he says quietly: “Yeah. Honestly I do. I mean, I can’t go into a bookstore any more, and that used to be my favorite thing to do in the world. To go in and wander from stack to stack, take down some books, read a little, leave with a big stack of things I’d never heard of when I came in. Now when I go to a bookstore, I get recognized within 10 minutes and then there’s a crowd around me. So you gain a lot but you also lose things.”

A similar desire for self-preservation led him to step away from the internet. “At first I was very flattered and I’d go on message boards and think: ‘Oh, this is cool, they’re all really excited.’ But then I began to think: ‘No, I should really steer clear. I don’t like the fact that some people have figured things out that are correct, and I don’t like the fact that other people have figured out things that are wrong but that could influence me too.’ So I took myself out of all that and let fans have their theories, some of which are right and some of which are wrong. They’ll find out which when I finish.” 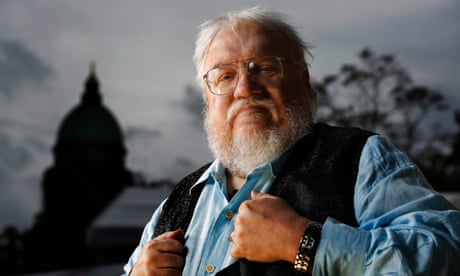 Game of Thrones prequel: no Targaryens or Lannisters – but plenty of Starks

That said, he thinks all reactions to the material, even the furious ones, should be celebrated. “I’m glad of the emotional reactions, whether to the books or the television show, because that’s what fiction is all about – emotion. If you want to make an intellectual argument or persuade someone, then write an essay or a piece of journalism, write nonfiction. Fiction… should feel as if you’re living these things when you read or watch them. If you’re so distanced by it that a character dies and you don’t care, then to an extent the author has failed.”

With that in mind, does he have a favourite scene where he felt the writing really hit home? I ask fully expecting him to mention one of the most famous moments, the Red Wedding, say, or Ned Stark’s shocking death in the first book.

There’s a long pause before the surprising answer comes. “I remember there’s a speech that a septon [the Westerosi version of a priest] gives to Brienne about broken men and how they become broken. I was always pretty pleased about writing that.”

(For the source of this, and many other quite interesting articles, please visit: https://www.theguardian.com/books/2019/aug/18/george-rr-martin-interview-game-of-thrones-at-own-pace-now/)