On a sweltering summer day in Washington, DC, Judy Williams pulls up to a homeless day center to fill her van with bottled water.

The homeless outreach coordinator is headed to the spots where she knows she’ll find people who are living outside.

“I’ll make sure they’re not lying down on the ground, and tap their feet for a response,” Williams said.

Inside the center, a few dozen people hide from the heat in a windowless room with cafeteria-style tables and loud televisions. Two nearby men’s shelters are also open around-the-clock instead of just at night because of a city-wide heat alert.

There’s free lunch, as well as computers for job searching, laundry machines and showers – but managers say people also visit just to get out of the sun.

The center is in the middle of warehouses and near a highway, and all the concrete radiates heat. Matthew King, a 44-year-old who works in a tire shop but is between homes, said he visits regularly, “especially when it’s hot.”

“This is the hottest I’ve ever seen in July,” said King at the center, which is just a few miles from the White House rose garden where President Trump said in 2017 that the US will leave the Paris climate change accord.

Residents of the US capital are regularly baked in heatwaves and endure stiflingly thick humidity.

But much like many cities around the world, Washington DC is being slowly cooked by the human-driven climate crisis to the extent its entire character will be transformed.

By 2080, researchers recently found, Washington DC’s climate will resemble what northern Mississippi or Dallas is like currently.

Unless drastic action is taken to slash greenhouse gases, global heating will transform the climates of almost every community in the US by the time today’s children are entering retirement. Outdoors in Philadelphia will feel more like Memphis; New York City is set to morph into northeastern Arkansas; Houston and Miami have no US comparison, leaping instead deep into climates currently found in México.

“Every city gets warmer, none get cooler,” said Matt Fitzpatrick, a University of Maryland academic who formulated the climate projections for US cities, based on a range of heat and rainfall scenarios.

In the lifetime of children today, a lot of these cities are going to be dramatically transformed

Its research shows how 540 North American urban areas will by 2080 become, on average, “most like the contemporary climate of locations about 500 miles (805kms) away and mainly to the south.”

The average temperature in US cities will rise by a blistering 9F (5C) by the end of the century, compared to the period of 1960-1990, if greenhouse gas emissions aren’t curbed. Some cities will be outliers – Fairbanks, Alaska, for example, is in danger of heating up by a sweltering 11.8F (6.6C).

“Cities have built infrastructure for a climate that will no longer be there,” Fitzpatrick said. “They will have to live with more heat and, if they are on the coast, flooding too. In the lifetime of children today, a lot of these places are going to be dramatically transformed.”

This new reality of searing heat is an existential one for those most vulnerable – the sick, the elderly and, in particular, the homeless. Washington officials estimate 6,521 people were experiencing homelessness this year, down 6% from 2018. In the broader metropolitan area, about 9,794 people are without homes.

Laura Zeilinger, director of the Department of Human Services, said as the city heats up, her goal stays the same – to get people into homes. Zeilinger said she isn’t aware of any heat-related deaths in the city, although she does review any hypothermia-related deaths at the end of each winter.

It doesn’t take much of a temperature increase to permanently shift the expected climate of a city. Fitzpatrick found that a 9.8F (5.5C) average temperature increase during Washington DC’s winter would plunge it into what the deep south is like today. This scenario, possible if emissions aren’t curbed, would also make DC around 70% wetter.

“When people hear about a few degrees in temperature rise they can think ‘that doesn’t sound too bad.’ This shows it can really have a big impact,” said Fitzpatrick, who has started to ponder the altered state of Cumberland, Maryland – the town he lives in. “It’s going to look more like southern Kentucky, more of a subtropical climate,” he said. “We get a fair amount of snow now but that’s all going to change. It’s going to be very different.”

Washington DC has been given a recent glimpse into its future – a 92F (33C) burst of heat last May saw the city break a 105-year-old record for high temperatures. Sitting on the banks of two tidal rivers – the Potomac and the Anacostia – Washington DC is also essentially a delta city at growing risk of flooding as bursts of rainfall become more intense.

It won’t just be uncomfortable, it will be a life or death challenge for many people

City leaders have attempted to identify the threat and counter it. A climate resilience plan, released in April, states that DC’s temperature has already risen by 2F (1.1C) over the past 50 years, with a further 4.5F (2.5C) increase to come within 30 years.

The number of “heat emergency days” in DC, where the heat index tops 95F (35C), is expected to occur on more than 50 days a year as the century draws to a close. “That means that, in 2080, our summer will be one long heat emergency,” the DC resilience document warns.

This scorching new climate is set to heavily burden DC’s growing population, many of them low-income and struggling with housing affordability. Vulnerable people will likely suffer dehydration or heatstroke, with increasing use of air conditioning placing a strain on the electrical grid.

Power outages will probably start to spike.
“It will affect how people live, work and get around in the city,” said Jessica Grannis, adaptation program manager at the Georgetown Climate Center. “It won’t just be uncomfortable, it will be a life or death challenge for many people. Once it starts getting very hot at night, people without air conditioning are going to be at serious risk if they can’t cool down properly.”

Sign up for the Cityscape: the best of Guardian Cities every week

Kevin Bush, DC’s chief resilience officer, has pledged to “make the city’s immune system stronger” to cope with this threat, comparing it to how cities in California prepare for the ructions of an earthquake.

Under the resilience plan, all DC buildings must be retrofitted to cope with rising heat and flooding threats by 2050, with all new buildings adhering to stricter codes within 13 years. The most at-risk buildings may even be removed.

There’s a plan to add more greenery to DC by planting more trees, which will provide shade, and other vegetation that will help soak up stormwater from heavy downpours. The curbsides of several major streets are already getting a makeover, with new plants being bedded in to help cool down the city.

“If [you] walk along the streets in DC at the moment you’ll see a lot of pavements being taken out in favor of plantings,” Grannis said. DC is, she added, “one of the most climate prepared cities in the US. Unfortunately it’s not quite the same everywhere.”

Dallas, which has a climate that Washington DC is moving towards, is currently trying to muster its own response to the rising heat. By 2080, according to the University of Maryland research, Dallas is set to become more like New Orleans – nearly 9F (5C) hotter and nearly three times as wet.

“We had a storm event a few weeks ago where 350,000 people lost power, trees were knocked over. People started to think we maybe aren’t as resilient as we thought, even when it’s not a Hurricane Harvey sort of event,” said James McGuire, director of environmental quality at the City of Dallas.

Dallas’ situation is exacerbated by the vast sprawl of concrete at its heart. A third of its surface is made up of rooftops, parking lots, highways and other impervious surfaces that soak up heat. This gives Dallas one of the highest “urban heat island” effects in the US, with the city up to 15F warmer than nearby rural areas. Some areas of the city average peak temperatures of 101F for five months of the year.

Of all US cities, only Phoenix is heating up quicker than Dallas, found a 2017 report from the Texas Trees Foundation, which recommended the city plant 250,000 trees to alleviate the sweltering conditions.

McGuire said the city hasn’t decided whether to adopt this goal but admitted Dallas needs “a lot more trees.” A recent giveaway of saplings to residents proved popular but more robust action will need to be undertaken without much state or federal support. McGuire said that officials in Dallas talk to their counterparts in Houston and San Antonio about heat but they may have to wait for a time when “impacts are so severe everyone will have to do something.”

Dallas’s summer is set to double in length by the end of the century if radical climate action isn’t taken, according to a major US government assessment released last year. The city will also be prone to the whiplash of prolonged droughts interspersed by the drumbeat of heavier rainfall.

Property on the banks of Trinity river, that runs through Dallas, has long received billions of dollars of flooding protection but there is less preparation for fresher challenges, such as protecting people working outdoors who risk keeling over in the heat.

In January, Dallas City Council kickstarted an attempt to address this manifold problem by passing its first climate resolution. Most of its adaption plans, however, have yet to be formed or funded. 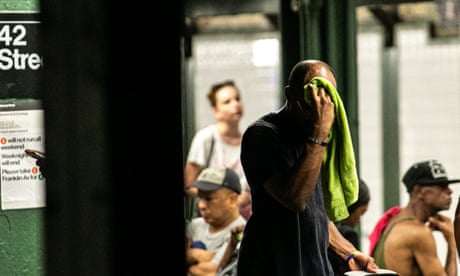 Death, blackouts, melting asphalt: ways the climate crisis will change how we live

On another hot day in Washington, Tariq Daniels – who is currently between homes – ate lunch and charged his phone at a local grocery store.

Daniels said the city has plenty of services, including the day centers, as well as free recreation centers and libraries. Daniels splits his time between the public spaces, his mosque and the grocery store, where he savors the quiet as a contrast to the noise of the shelter in which he currently sleeps.

“You’ve got everything that you need,” Daniels said. “A lot of people have just given up. They’re doing drugs to the point where they’re numb to the outside temperature.”

(For the source of this, an many other important articles, please visit: https://www.theguardian.com/cities/2019/aug/20/how-us-cities-are-scrambling-to-protect-people-from-extreme-heat/)