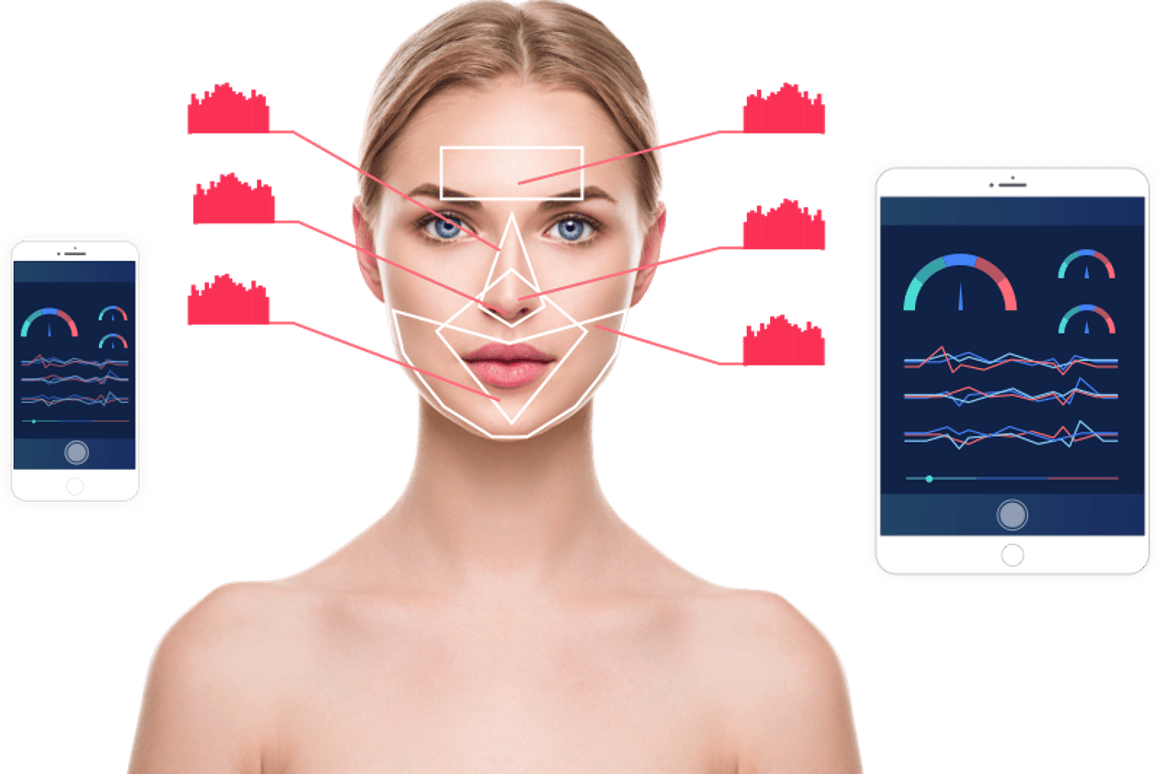 A new system that measures blood pressure using a phone video is currently 95 percent accurate but has not yet been tested on a large variety of different skin tones.  Nuralogix
–

An exciting new technology, called transdermal optical imaging, can turn your smartphone into an accurate diagnostic device that can measure your blood pressure by analyzing a short video taken of your face. The University of Toronto-led research has demonstrated the system is 95 percent accurate and a smartphone app is already in development.

Considering the awesome computational power that sits in our pockets it is not unexpected that many developers and engineers are working hard to turn our smartphones into super-charged health diagnostic devices.

While many of these compelling innovations require extra add-ons to do things like analyze your breath or test your blood, some of the more extraordinary inventions need nothing more than the smartphone itself. Some impressive recent examples include tracking red blood cells with the phone’s camera and flash, identifying sleep apnea using sonar, and diagnosing ear infections using a simple piece of paper.

Checking blood pressure is one of the more common diagnostic procedures almost everyone will have experienced at some point. The general device we are all used to having our blood pressure measured through is called a sphygmomanometer, and while modern iterations of the device have digitized the measurement meters, they all still require some kind of bulky inflatable cuff to wrap around our arm.

One recent smartphone-based blood pressure innovation utilized a small case that attaches to the back of your smartphone. By pressing your finger against the sensor unit the device can track your systolic and diastolic blood pressure via the transverse palmer arch artery in the fingertip. Removing the need for any add-on device another, more recent, system demonstrated a way to leverage existing sensors to measure a person’s blood pressure.

A new system is perhaps the most impressive innovation in the field to date, able to accurately measure blood pressure by simply analyzing a short 30-second video of a person’s face. The technology was discovered somewhat accidentally when two researchers stumbled across the innovation while trying to devise a contactless lie detector.

The researchers discovered that the optical sensor on a smartphone was sensitive enough to capture reflected red light coming off a person’s face. This red light is reflected off hemoglobin under the skin, and with appropriately trained algorithms, it can function as an effective metric to measure, among other things, blood pressure.

“From the video captured by the technology, you can see how the blood flows in different parts of the face and through this ebb and flow of blood in the face, you can get a lot of information,” explains Kang Lee, lead author on the new study, and co-founder of Nuralogix, a start-up working to turn the technology into a commercial smartphone app.

The current algorithmic model described in a new paper can reach accuracy rates of around 95 percent on three different blood pressure metrics: systolic, diastolic and pulse pressure. However, the system is not without certain limitations that will need to be resolved before it can be widely deployed in general settings.

The current technology has only been trained on datasets of subjects within a relatively normal spectrum of blood pressures. The researchers suggest more data from hypotensive and hypertensive subjects is needed to allow the model to understand correlations between face data and blood pressure in those cases.

“In order to improve our app to make it usable, particularly for people with hypertension, we need to collect a lot of data from them, which is very, very hard because a lot of them are already taking medicine,” explains Lee. “Ethically, we cannot tell them not to take medicine, but from time to time, we get participants who do not take medicine so we can get hypertensive and hypotensive people this way.”

Another major hurdle for the research is whether the system works for subjects with darker or lighter skin. The current study was completed with subjects of East Asian or European decent, so it is unclear how effective the system is for either very dark or very fair skin tones. The researchers do hypothesize the system to be functional in those instances, however, further work is needed to expand those racial samples and validate the results.

Currently the startup spun off from the work by the researchers has released an early iteration of an app utilizing the transdermal optical imaging technology. Called Anura, the app currently only offers heart rate measurements. The company claims it will release a version of the app with blood pressure tracking in mainland China later this year.

The new research was published in the journal Circulation: Cardiovascular Imaging.

(For the source of this, and many other quite interesting articles, please visit: -app-https://newatlas.com/smartphone-app-measure-blood-pressure-face-camera/61002/)