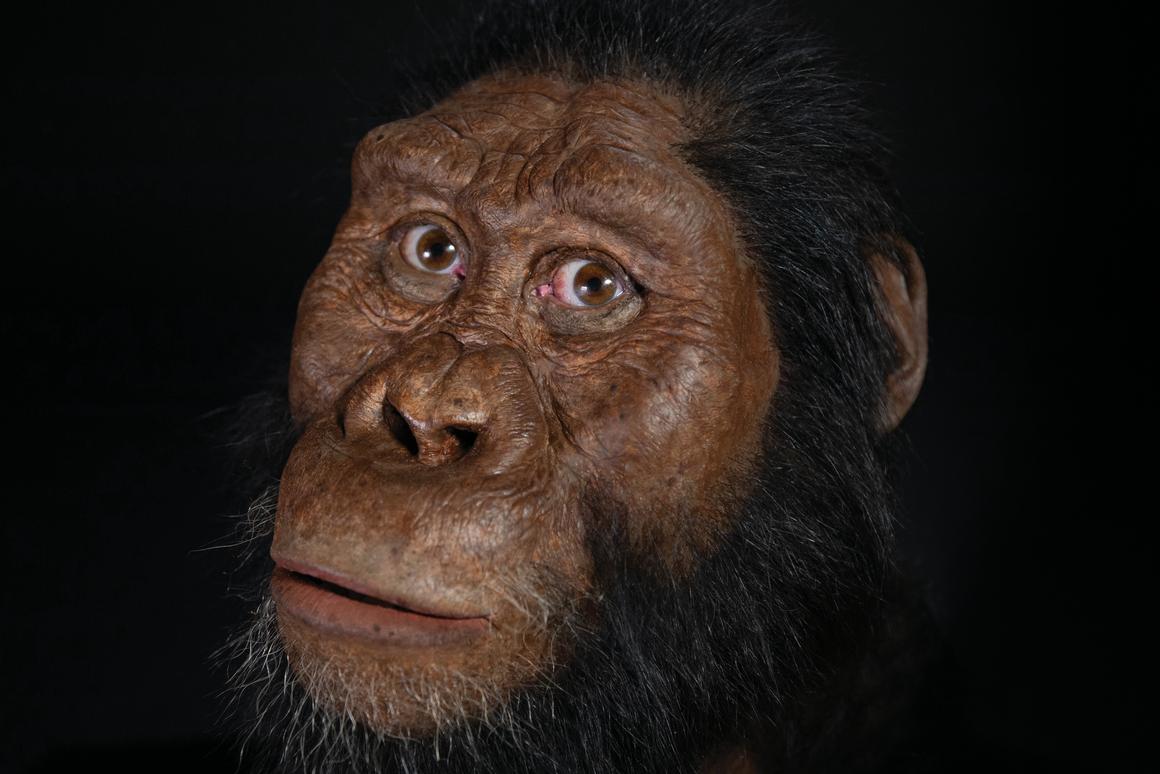 A facial reconstruction of Australopithecus anamensis, based on a newly found, almost-complete skull.  Matt Crow –

A new fossil discovery means we’re finally able to look upon the face of our oldest ancestor. Paleontologists have discovered an almost-complete skull of Australopithecus anamensis, which has previously only been known from some jawbones, teeth and bits of leg bones. The new find allowed scientists to realistically recreate the hominin’s face for the first time – and it might just shake up the family tree.

The face of this long-lost ancestor is strangely familiar, not least because of the eerily human eyes. But those – along with the leathery brown skin and muttonchop beard – are the kind of best-guess embellishments you’d expect from a recreation like this. Other features, like the large flat nose, the protruding rounded jaw, and prominent brows and cheekbones, are based on the most complete skull of its kind ever found.

Discovered in Ethiopia in 2016, the skull has been dated to 3.8 million years old and attributed to an adult male specimen of Australopithecus anamensis. Interestingly, that makes it both the youngest fossil of A. anamensis known – which are believed to have lived between 4.2 and 3.9 million years ago – and one of the oldest cranial remains of hominins, which tend to dry up in the fossil record before about 3.5 million years ago.

This new find fills an important gap in the human origin story. A. anamensis is the oldest known species in the Australopithecus genus, who are considered the earliest members of the human evolutionary tree. It’s long been accepted that A. anamensis directly evolved into another subspecies, A. afarensis – the most famous example of which is Lucy herself.

But with this new skull, scientists have far more pieces of the puzzle and have realized that they may have previously been putting them together wrong.

The researchers were able to determine which species the skull belonged to by comparing it to the previously-discovered teeth, jaws and other fragments. The rest of the skull showed a strange mix of primitive and advanced (or “derived”) features. Most interesting is the fact that some of the features on A. anamensis are actually more advanced than those on A. afarensis. That calls into question the long-standing idea that the former evolved directly into the latter.

The revised timeline they created says that A. anamensis lived until at least 3.8 million years ago, while A. afarensis arose earlier than previously thought – maybe as early as 3.9 million years ago. Doing the math, that suggests that the two species may have overlapped by as much as 100,000 years.

Once again, it seems like our evolutionary history needs a rewrite. A more complete fossil record can help us patch up holes and revise what we thought we knew.

The research was described in two papers published in the journal Nature. The researchers describe the find in the video below.

The Face of Lucy’s Ancestor Revealed

(For the source of this, and many other interesting articles, and to watch a video associated with it, please visit: https://newatlas.com/science/oldest-human-ancestor-skull-face-reconstruction/)