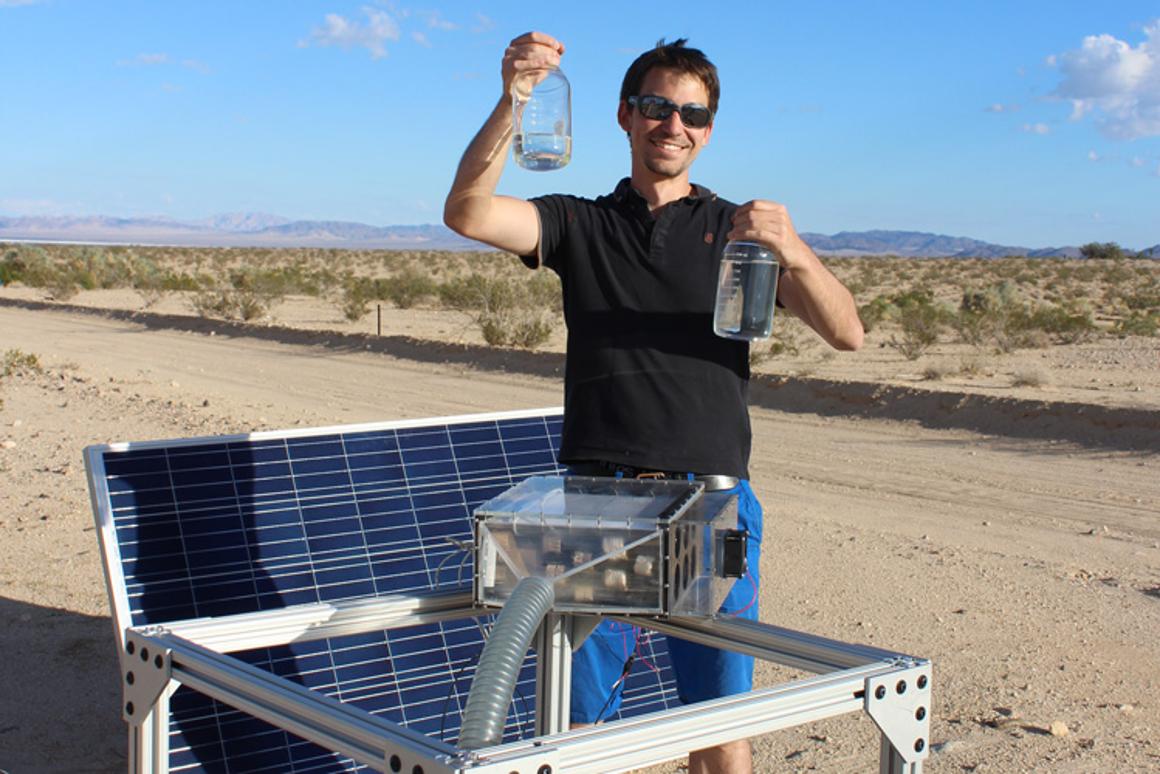 Researcher Mathieu Prévot with water collected from the new device that can wring water out of even very dry air.

As vital as clean water is for human life, unfortunately it’s not always easy for people to get enough. Adding insult to injury, the stuff is basically always floating around us in the air, unreachable. Now, researchers from the University of California Berkeley have developed a device that can wring drinkable amounts of water out of even the driest air.

The team says this new water harvester can produce more than 1.3 L (5.4 US cups) of water per day per kilogram (2.2 lb) of a particular water-absorbing material. This can be done even at less than 40 percent relative humidity. That’s not a whole lot of water, but it is more than enough to keep a person alive, if a situation was that dire.

The harvester was put to the test over three days in the Mojave Desert. During that time, the device produced 0.7 L (3 cups) of water per kg of material, and even on the driest day the harvester managed to wring 200 ml (6 oz) of water out of air that had an extremely low relative humidity of just seven percent.

The key component of the water harvester is a type of material known as a metal-organic framework (MOF). These have incredibly large surface areas that allow lots of water molecules from the air to collect and condense inside them at room temperature. When these MOFs are heated up they can easily release that water again.

The device is basically a large, transparent plexiglass box, filled with cartridges of MOFs. Ambient air flows over the MOFs, which pluck water out of it. This water is then removed from the MOFs with some mild heating, and expelled to a condenser where the liquid water gathers.

This is actually the third version of a water harvester that the team has created. In 2017 the first prototype was passive, collecting water from the air overnight before using the heat of the sun the next day to collect and condense it again. The second version followed in 2018, with improvements that let it collect up to 100 ml (3.4 oz) of water per kg of MOFs.

The team says this latest version is 10 times more efficient than last year’s model, and 100 times more efficient than the 2017 prototype. This is thanks to a small electric fan that blows more air over the MOFs, and small heaters that warm the material up to release the water. Both of these components are running off energy collected by solar panels on the top of the device, and there are batteries to let it run overnight.

Since this water harvester is completely self-contained, it could be perfect for rural regions or developing countries, where water scarcity can be a major issue.

Better yet, the team says the device is scalable. A startup company started by the team is now testing a microwave oven-sized version that can supposedly produce between seven and 10 L (1.8 and 2.6 gal) of water per day – enough daily drinking water for three adults. A larger version the size of a fridge could supply 200 to 250 L (53 to 66 gal) a day, satisfying a household’s entire water needs. And the ultimate goal would be a much larger device that could produce 20,000 L (5,280 gal) a day, helping entire villages.

“We are making ultra-pure water, which potentially can be made widely available without connection to the water grid,” says Omar Yaghi, lead researcher on the project. “This water mobility is not only critical to those suffering from water stress, but also makes possible the larger objective – that water should be a human right.”

The research was published in the journal ACS Central Science.

(For the source of this, and many other equally interesting articles, please visit: https://newatlas.com/good-thinking/water-harvester-drinking-water-dry-desert-air/)