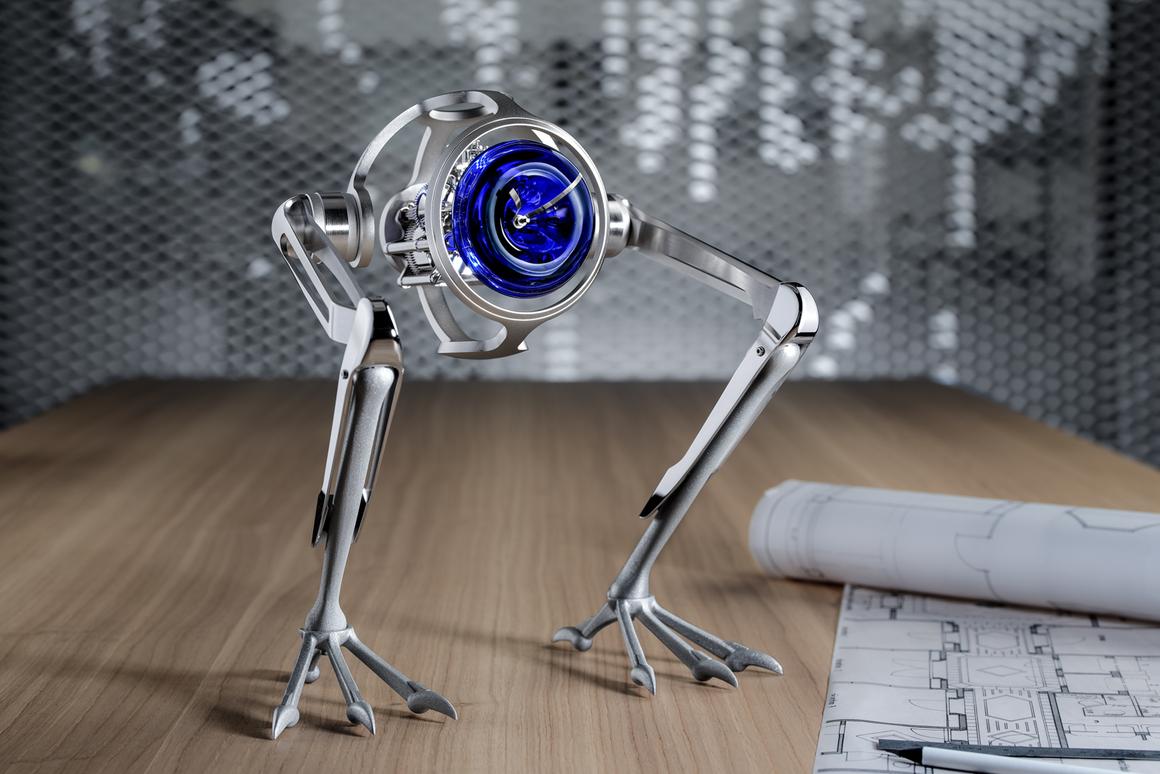 You can’t get more whimsical than a clock set on metal legs modeled from the bones of an actual Tyrannosaurus Rex.   MB&F.
–

For their 11th collaboration, MB&F and Swiss clockmaker L’Épée 1839 have gone prehistoric: meet the T-Rex desk timepiece. Crafted out of Murano glass and steel, the minimalist clock is based upon the design submitted by MB&F for this year’s Only Watch charitable auction in support of children suffering from Duchenne muscular dystrophy.

One thing that marks MB&F is the company’s penchant for timepieces that emphasize the fun and the whimsical – and you can’t get further on that spectrum than a clock set on metal legs modeled from the bones of an actual Tyrannosaurus Rex. Based upon 3D scans of fossils, the legs add to the clock’s 2 kg (2.2 lb) weight, yet the design and finish provide it with a light, agile if slightly comic air, like a one-eyed egg that sprouted legs.

Not surprisingly, the inspiration for the T-Rex came from the 1993 feature, Jurassic Park, which had an influence on designer Maximilian Maertens. He even came up with a backstory to explain the T-Rex’s odd design.

“The story takes off from ideas given to me by past projects of MB&F, that we have a pilot in his starship discovering new planets,” says Maertens. “Eventually, he got so far out in space that the only way back to Earth was via a black hole, but it time-warped him back to the time of dinosaurs and the starship was fused with a hatching dinosaur egg. You see the remnants of the starship in the body of the clock and the movement, the dinosaur appears via the legs, and even the black hole remains part of the design, via the dial that sinks inwards towards the center where time originates.”

Produced in three limited editions of 100 units, each with Murano glass dials in green, blue, or red, the T-Rex stands at 26.5 cm (10.4 in) and is crafted out of 201 parts made of stainless steel, palladium-plated brass, and bronze complete with polishing, satin-finishing and sandblasting.

The simple hours and minutes display is powered by an in-house, 17-jewel, L’Epée 1839 movement with a frequency of 2.5 Hz (18,000 vph) and a power reserve of eight days. Winding is by a key at the back of the movement and the time is set at the front of the barrel using the same key.

(For the source of this, and many other interesting articles, please visit: https://newatlas.com/collectibles/t-rex-desk-clock-mbf/)