The exoplanet K2-18b isn’t exactly Earth, but it’s as close as it gets.

Good news: We’re all moving 110 light-years away! Well, maybe not quite yet, but scientists just made a major breakthrough in the search for habitable worlds beyond our own: A team of astronomers detected water vapor in the atmosphere of a super-Earth.

The study, published recently in the journal Nature Astronomy, marks the first time water has successfully been detected in a planet outside of our solar system.

Angelos Tsiaras, Ph.D., lead author of the study and a research associate at University College London’s department of physics and astronomy, emphasized what a big deal this detection is during a press call.

“This is the only planet right now that we know outside of the solar system that has the correct temperature to support water,” Tsiaras said. “It has an atmosphere, and it has water in it, making this planet the best candidate for habitability that we know right now.”

The planet in question, designated K2-18b, is around twice the size of the Earth and eight times its mass. It orbits in the habitable zone of the red dwarf star K2-18, which is less than half the size of our sun. Located 110 light-years away from Earth, the star lies in the constellation Leo.

The planet was first discovered in 2015, and the team used archival data obtained by the Hubble Space Telescope to observe its transit between its host star and Earth. As the planet travels in front of its star, its atmosphere leaves behind a fingerprint on the stellar light. This transit allowed astronomers to use a technique called transmission spectrography to analyze the fingerprint. This process revealed a signature of water vapor molecules, as well as the presence of hydrogen and helium.

“We were eager to reach these results,” Tsiaras said. “We wanted to find [water] because water is a molecule that is easily formed and also [because] it’s connected to life.”

But just because this planet could potentially have water in its atmosphere and similar temperatures to Earth, that doesn’t necessarily mean that we should start packing up and heading toward this distant world. Scientists still have much to learn and confirm about K2-18b before humanity starts moving in. 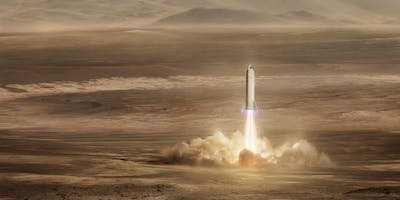 Inverse Daily: The True Cost of Building a City on Mars, According to Elon Musk

According to Elon Musk, it could be the most expensive construction project in human history — and cost up to an eighth of the value of the entire global economy.
Read More

For instance, the measurements of water in the planet’s atmosphere vary from 0.01 percent to 50 percent, which means it could either be really wet or really dry. Additionally, due to its higher mass relative to Earth, the planet would be a lot harder to walk on since it will have stronger surface gravity.

The planet also orbits closer to its dwarf star, which means higher levels of UV radiation.

The team hopes to learn more about K2-18b through further telescope observations and hopefully find more planets like it in order to deepen scientists’ understanding of habitability on other worlds compared to Earth.

“The only question we’re trying to ask here … is the question of habitability,” Tsiaras said.

Ingo Waldmann, Ph.D., a co-author on the study and a senior research associate at University College London’s department of physics and astronomy, explained that if there is life on this planet, it would have had to evolve differently than it did on Earth.

“We also need to understand that habitability as we understand it is a very Earth-centric concept,” Waldmann said during the press call. “We know one world that is habitable, which is our own Earth, and now we have a potentially second one that might be habitable.”

“[But it’s] maybe not quite your vacation destination just yet,” he added.

(For the source of this, and many other important and  interesting articles, please visit:  https://www.inverse.com/article/59175-super-earth-k2-18b-has-water-in-atmosphere/)