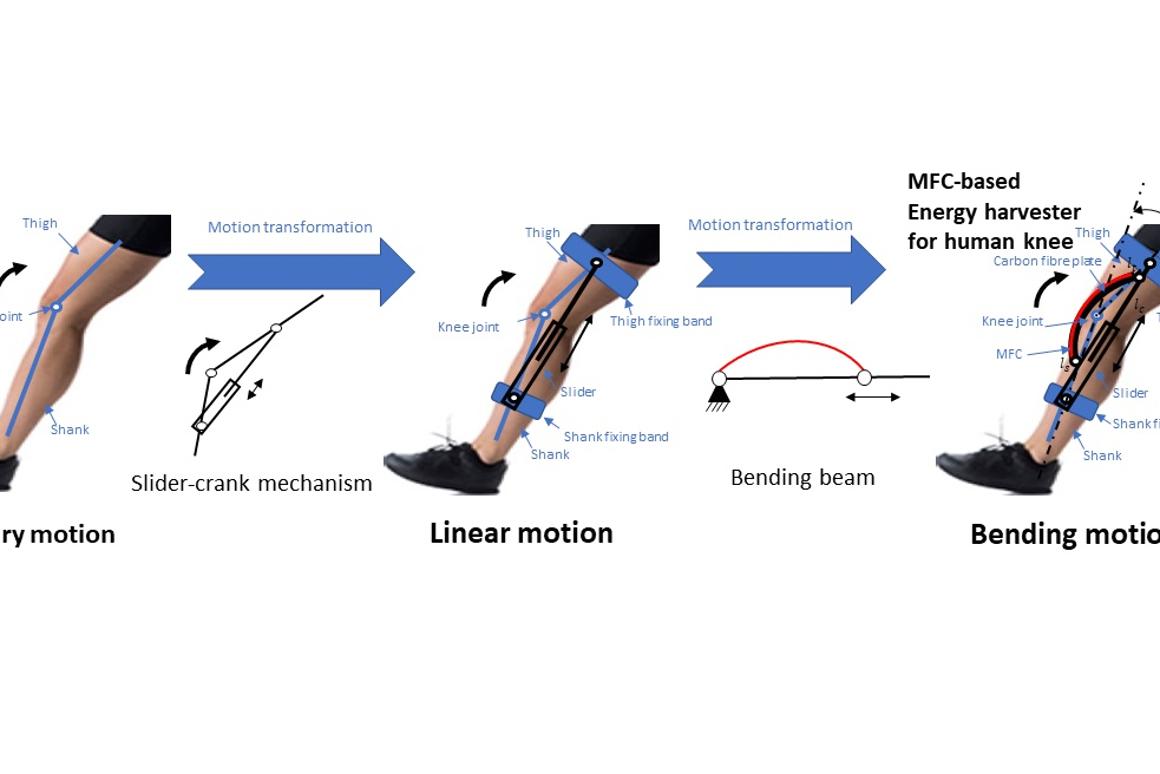 A diagram of the energy-harvesting device.  Gao et al.
–

As compared to most other joints in the human body, the knee has quite a large range of motion … so why not put that motion to use, as a source of electricity? That’s what a new prototype device does, and it reportedly does not cause its wearer to expend more energy while walking.

Developed by scientists at the Chinese University of Hong Kong, the 307-gram (0.7-lb) device incorporates a slider-crank mechanism, which converts the rotary motion of the knee into linear motion.

Additionally, a strip of carbon fiber is attached at either end to the top of the rod, and to the slider. Adhered to that strip is a “smart” macrofiber composite (MFC) material, that generates an electrical current as it bends. This means that whenever the rod moves into the slider and the carbon fiber bends, the material bends with it – producing 1.6 microwatts of power at walking speeds of 2 to 6.5 km/h (1 to 4 mph).

This should reportedly be enough to run wearable devices such as health-monitoring gadgets or GPS units. What’s more, when the breathing patterns of test subjects were monitored as they walked on a treadmill, it was determined that they weren’t working any harder when using the device.

Ultimately, it is hoped that the technology could find use with people such as mountaineers, who need to keep electronic items charged while trekking through remote locations. A paper on the research was recently published in the journal Applied Physics Letters.

British scientists previously developed an energy-harvesting wearable of their own, that generates electricity by using knee movement to “pluck” arms that respond by vibrating.

(For the source of this, and many other interesting articles, please visit: https://newatlas.com/knee-motion-energy-harvesting/60634/)