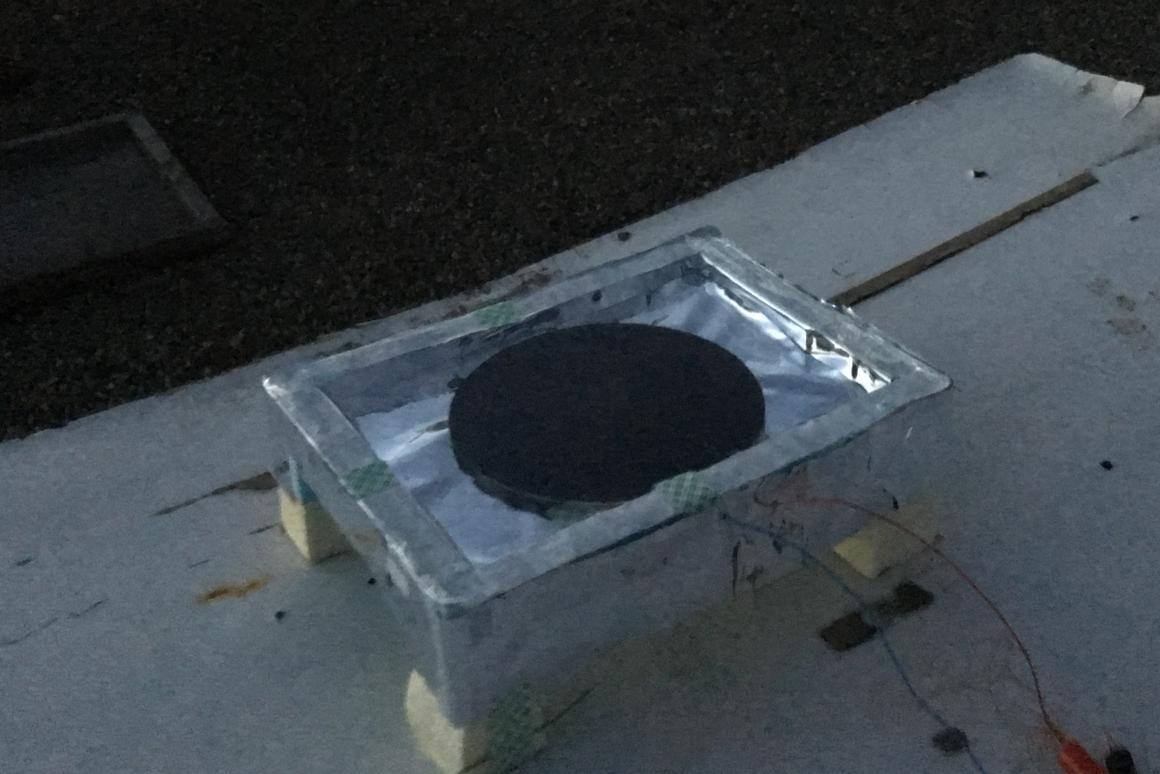 The thermoelectric generator uses a black aluminum disk to radiate heat into the atmosphere, and a polystyrene enclosure to keep the air inside warm.  Aaswath Raman.
–

As effective as solar panels are, one of their major downsides is that they only produce power during the day, so excess energy needs to be stored for use overnight. But now, engineers from the University of California, Los Angeles (UCLA) have developed a prototype device that works almost the opposite way, harvesting energy from the cold night sky to passively power an LED.

The device works on the thermoelectric principle, where an electric current is created through the temperature difference between two surfaces. This idea could ultimately end up making for thermoelectric exhaust pipes that help charge a vehicle’s battery, camp cooking gear that tops up phones, and clothes that use body heat to power wearable electronics.

In this case, the thermoelectric device also made use of another odd phenomenon called radiative cooling. This process is often seen in surfaces that face the sky – at night, they can become colder than the surrounding air because they radiate heat straight into space, since the atmosphere doesn’t block infrared energy. Past experiments with radiative cooling have shown promise as a way to cool buildings without needing to use energy.

So the UCLA researchers combined these two principles to build their thermoelectric generator. The device is made of an aluminum disk painted black, sitting in a polystyrene enclosure that’s wrapped in aluminized mylar. This keeps the air inside relatively warm, while the disk acts as the cold sky-facing surface.

The thermoelectric module uses the temperature difference between that disk and the surrounding air to generate electricity. When this is connected to a voltage boost convertor and a small white LED, enough energy was generated to keep the light on.

The team tested the device on a rooftop overnight, and measured the generator’s output over six hours. They found that it was able to produce 25 mW per m2. Granted that’s not a whole lot of energy, but not only is it an intriguing proof of concept that this design works, but the researchers say that it could quite easily be scaled up to produce 0.5 W/m2.

Ideally, this kind of thermoelectric generator could be used in conjunction with solar panels, so that the two systems work around the clock to harvest ambient energy.

“Our work highlights the many remaining opportunities for energy by taking advantage of the cold of outer space as a renewable energy resource,” says Aaswath Raman, lead author of the study. “We think this forms the basis of a complementary technology to solar. While the power output will always be substantially lower, it can operate at hours when solar cells cannot.”

(For the source of this, and many other important articles, please visit: https://newatlas.com/energy/thermoelectric-generator-renewable-energy-cold-space/)