No wonder the dinosaurs didn’t survive.

The day a massive asteroid hit our planet about 65 million years ago may have been the most chaotic day on Earth, and we’re not just talking about the mass extinction part. New research on the Chicxulub crater in the journal Proceedings of the National Academy of Sciences outlines the aftermath of this asteroid impact, showing what it was really like to be there at the beginning of the Cretaceous-Paleogene extinction event, from the moment of impact until the Earth was plunged into chilling darkness.

The day this crater formed, the world changed forever.

In a study published recently, researchers reconstructed the series of events that followed the impact, which may have included a global cooling and darkening period, a tsunami, and wildfires.

The Chicxulub crater off the coast of Mexico’s Yucatán Peninsula has preserved the details of what led to the extinction of most life on Earth millions of years ago, and it is the only crater on Earth with a peak ring or a circular formation of elevated material surrounding the center of the crater. 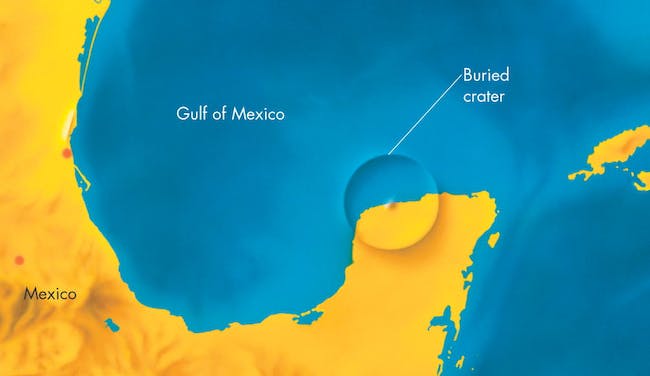 The Chicxulub crater, on the Yucatan peninsula is believed to be the impact that killed the dinosaurs
–

By analyzing cores from the peak ring of the impact crater, which were recovered when the site was drilled in 2016, a team from the Jackson School of Geosciences at the University of Texas at Austin were able to reconstruct the environmental and geological aftermath created by the impact.

Ever since it was discovered in the late 1970’s, the Chicxulub impact crater has provided clues as to what may have ended the dinosaurs’ reign over the Earth, as well as what the fate of our planet might be, should another massive asteroid be headed its way.

Previous research has explored the events that may have followed the asteroid impact but this study is the first to generate a sequence of events that occurred directly after Earth was hit by the massive asteroid.

“Preservation of these extreme sediment accumulation rates within the impact basin allows us to resolve the geological processes that occurred over minutes to years after the impact event,” write the study’s authors.

Based on these new findings, the asteroid formed the 112-mile wide crater within seconds of impact. Within minutes, an overflow of a 40 meter thick layer of melt rock followed, formed from different fragments. Then came a flow of seawater into the crater that carried around 90 meters of different materials.

An opening in the rim of the crater caused a tsunami wave with the water flowing outwards and then back into the crater within 30 to 60 minutes after the impact took place, before the crater was completely flooded during the first day.

As if that wasn’t enough, the team of scientists also found evidence of charcoal in their samples, which suggests that the impact likely caused dry plants near the impact zone to catch fire, resulting in wildfires that spread as far as 620 to 930 miles away from the site.

These events, despite all their fire and fury, quickly left the Earth dark, and eventually very cold — up to 7° Celsius below pre-impact temperatures.

After the impact, sulfate aerosols were released into the atmosphere, resulting from sulfate mixing with water vapor. These aerosols blocked the sun, causing a global cooling effect that could have lasted around 30 years. The researchers suspect that the aerosols also resulted in complete darkness following the impact.

The authors suggest that the resulting cooling and darkening of the planet may also be one of the leading extinction mechanisms responsible for killing off most life on Earth.

So while we can’t travel back in time to see exactly what happened on the day the Cretaceous-Paleogene mass extinction began — nor would we really want to — this research is the next best thing, giving us a blow-by-blow breakdown of the day the world changed forever.

(For the source of this, and many other equally interesting articles, please visit: https://www.inverse.com/article/59122-chicxulub-crater-study-reveals-wildfires-tsunamis/)