When it comes to ways you can support your lifelong health, drinking plenty of water is kind of a no-brainer. But even that simple strategy may not be so simple. New research in the journal Heliyon shows that tap water in the United States can contain a surprising array of cancer-causing chemicals. This doesn’t necessarily mean it’s time to freak out, but it does mean we need to take a serious look at public water in the US.

In a paper published recently, researchers show evidence that chemicals in US drinking water may be responsible for over 10,000 cancer cases over an 8-year period. Based on data collected from 2010 to 2017, a team led by Sydney Evans, M.P.H., science analyst at the non-profit Environmental Working Group, showed that arsenic, disinfection byproducts and radioactive contaminants are the main hazardous ingredients that could be contributing to the cancer risk of drinking water.

At this point, we’re kind of used to being told that everything causes cancer. Perhaps most concerning about this research, though, is that these cancer risks are associated with very low levels of contaminants in drinking water, levels at or below those that have been deemed safe by the Environmental Protection Agency.

This new paper, commissioned by the EWG, builds on past research by bringing together a larger set of data on water contaminants than past studies have used.

“Risk assessments have been typically conducted for individual drinking water contaminants such as arsenic or nitrate, or for small groups of related chemicals such as disinfection byproducts or metals,” they write. “Here, we present the first application of the cumulative cancer risk framework to a drinking water dataset for the entire United States.”

This idea of cumulative cancer risk is key, but before we go further, let’s be clear about what cancer risk really means:

Evans’ team shows evidence that the cumulative cancer risk associated with contaminants in drinking water in the US is between 1-in-1,000 and 1-in-10,000, meaning that out of either 1,000 or 10,000 people, there would be one case of cancer. According to the team’s research, this level of risk varies depending on where you live in the US — hence the range.

Notably, as the maps below show, they identified that municipal water drawn from the ground generally carried a lower risk than water from surface sources like reservoirs. This follows what we know about how surface runoff carries pollutants into surface water sources without giving them the chance to be filtered by the soil column. 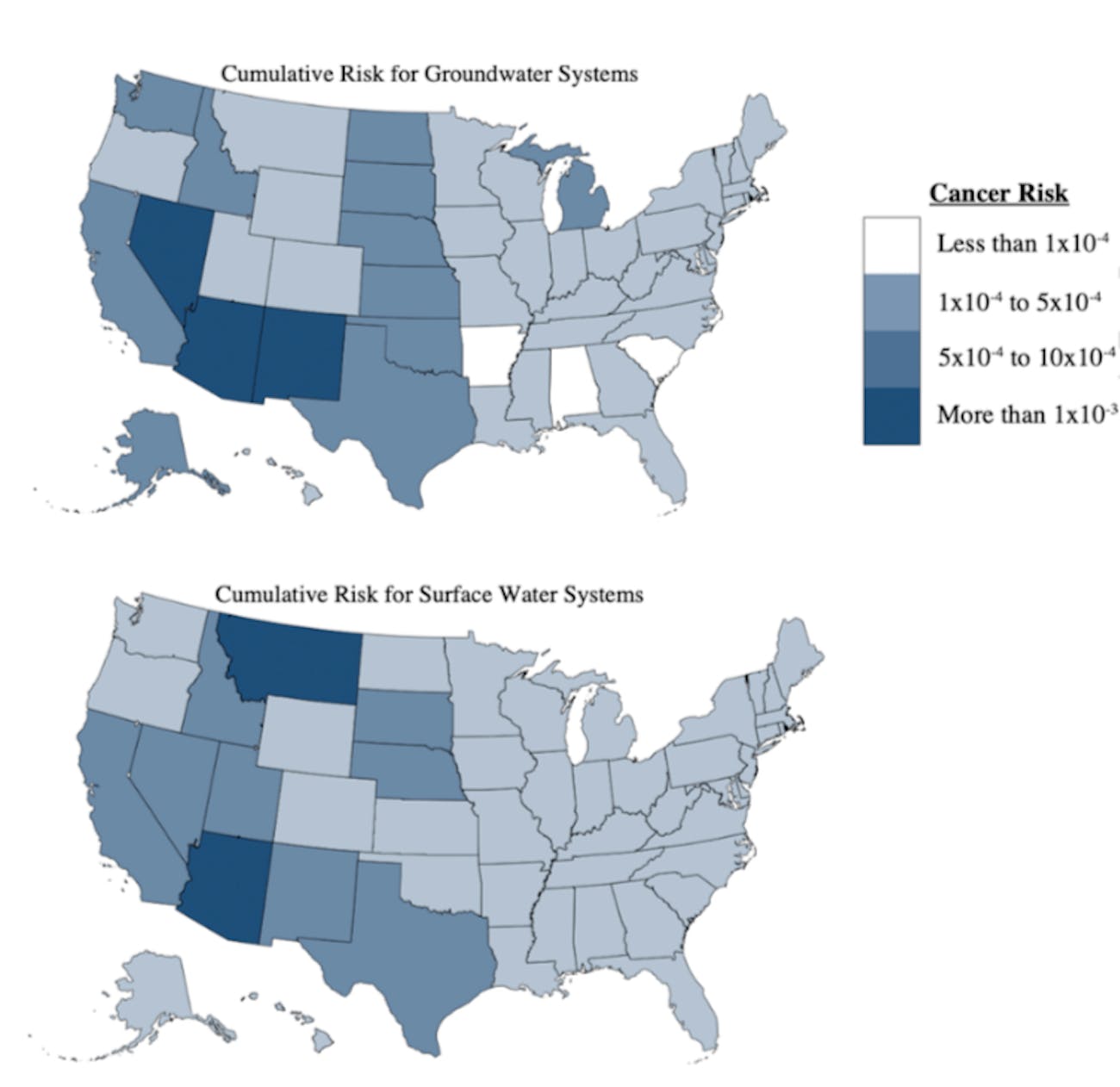 These maps show the cumulative cancer risk for municipal water drawn from the ground (top) versus water from surface sources (bottom).

For comparison, the level of cancer risk from common water contaminants in this study is similar to that identified by the Environmental Protection Agency in its National Air Toxics Assessment released in 2018. This means that the cancer risk from drinking water is about as high as it is from breathing air.

On the one hand, these absolute risks are relatively low, in that most people are not likely to develop a case of cancer.

Evans and her co-authors don’t propose that you stop drinking water. Rather, they point out that it’s a matter of public concern that cancer risks associated with water contaminants are similar to those associated with air pollution.

“Thus, improving water quality at the tap and investing in measures for source water protections represent opportunities for protecting public health and decreasing potential disease incidence due to environmental pollution,” they write.

In the meantime, while we wait for public policy to catch up to science, you can start using a water filter.

(For the source of this, and other important articles, please visit: https://www.inverse.com/article/59378-drinking-water-and-cancer-causing-chemicals/)