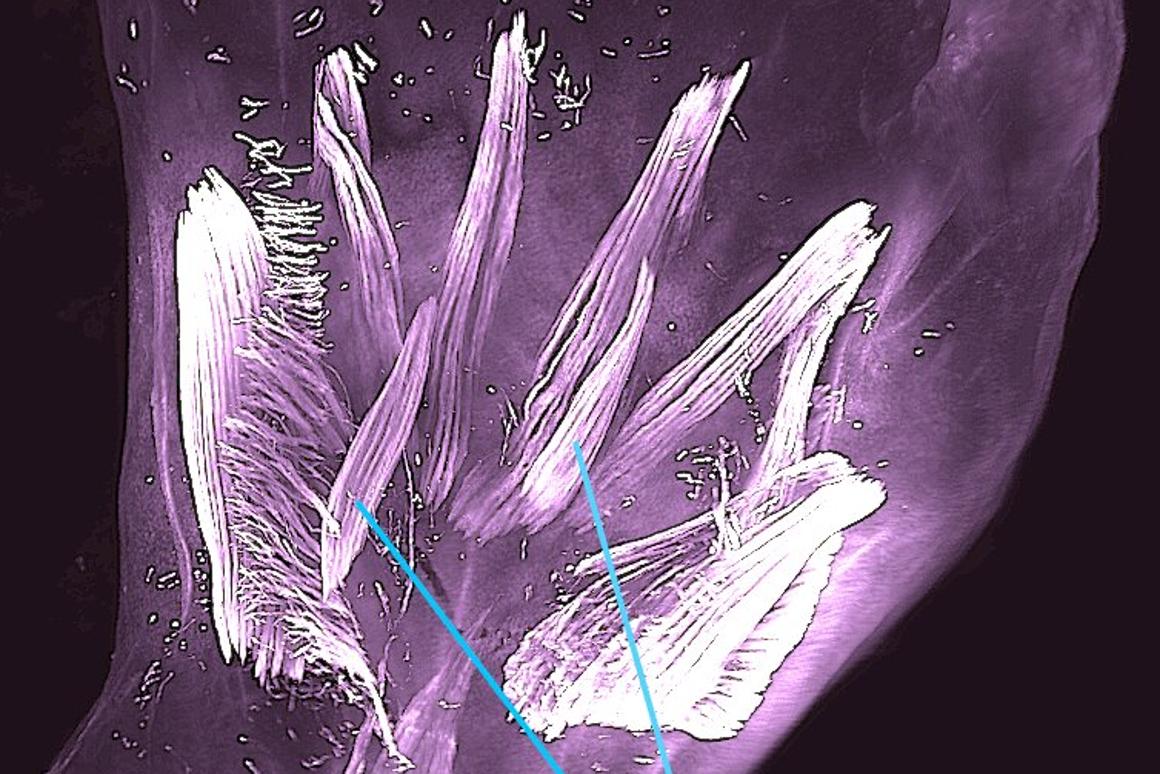 In a 10-week-old embryo some of the highlighted muscles, found in some reptiles, disappear before birth.  Rui Diogo, Natalia Siomava and Yorick Gitton.
–
A compelling new imaging study has looked at the development on human limb muscles in embryos across the early weeks of gestation. The research discovered lizard-like muscles temporarily develop before ultimately disappearing by birth. It is suggested these extra reptilian muscles represent distant traces of our evolutionary history.
–
In the field of biological science an atavism is an ancient trait that can be seen in a modern organism. Perhaps the most well-known human atavism is the temporary presence of a tail. For a very short time while in the womb, a fetus develops a tail, but by the eighth week of gestation this tail has generally disappeared, its temporary existence a sign of our ancient ancestral form.

“It used to be that we had more understanding of the early development of fishes, frogs, chicken and mice than in our own species, but these new techniques allow us to see human development in much greater detail,” explains Rui Diogo, lead on the new research from Howard University.

The team examined a number of 3D images tracking embryo development between weeks seven and 13 of gestation. The focus was particularly on muscle development in the hands and feet. Strikingly, the researchers found that there are 30 separate muscles in each limb by around week seven of gestation. By week 13 this number has dropped to around 20 individual muscles, with some of these atavistic muscles either fusing with others, or simply degrading and disappearing entirely.

“What is fascinating is that we observed various muscles that have never been described in human prenatal development, and that some of these atavistic muscles were seen even in 11.5-weeks-old fetuses, which is strikingly late for developmental atavisms,” says Diogo.

This new discovery certainly raises quite a few questions that future research will hopefully be able to answer. The small sample size of the study, only 15 babies, means further verification in larger datasets is necessary before it can be concluded this is a universal developmental process. It is also unclear exactly what happens to these muscles to cause them to ultimately disappear.

The hypothesis that they are atavistic muscles points to an evolutionary divergence about 250 million years ago. No trace of these specific muscles can be found in any living adult mammal, but these extra limb muscles can be identified in some reptiles, such as lizards featuring ultra-flexible feet.

Diogo notes that in very rare instances these muscles can be detected in adult humans. Sometimes they are found in healthy adults with no noticeable effects, but other times they can be directly identified to be the result of congenital malformations.

“This reinforces the idea that both muscle variations and pathologies can be related to delayed or arrested embryonic development, in this case perhaps a delay or decrease of muscle apoptosis, and helps to explain why these muscles are occasionally found in adult people,” says Diogo. “It provides a fascinating, powerful example of evolution at play.”

The new research was published in the journal Development.

Source: The Company of Biologists via ScienceDaily

(For the source of this, and many additional interesting articles, please visit: https://newatlas.com/science/ancient-reptilian-hand-muscles-human-fetuses-evolutionary-remnants/)