When Mount Vesuvius erupted in AD79 it destroyed the towns of Pompeii and Herculaneum, their inhabitants and their prized possessions – among them a fine library of scrolls that were carbonised by the searing heat of ash and gas.

But scientists say there may still be hope that the fragile documents can once more be read thanks to an innovative approach involving high-energy x-rays and artificial intelligence.

“Although you can see on every flake of papyrus that there is writing, to open it up would require that papyrus to be really limber and flexible – and it is not any more,” said Prof Brent Seales, chair of computer science at the University of Kentucky, who is leading the research.

The two unopened scrolls that will be probed belong to the Institut de France in Paris and are part of an astonishing collection of about 1,800 scrolls that was first discovered in 1752 during excavations of Herculaneum. Together they make up the only known intact library from antiquity, with the majority of the collection now preserved in a museum in Naples.

The villa in which they were found is thought to have been owned by the father-in-law of Julius Caesar, the Roman dictator who was assassinated in 44BC.

Experts have attempted to unroll about half of the scrolls through various methods over the years, although some have been destroyed in the process and experts say unrolling and exposing the writing to the air results in the ink fading.

Seales and his team have previously used high-energy x-rays to “virtually unravel” a 1,700 year old Hebrew parchment found in the holy ark of a synagogue in En-Gedi in Israel, revealing it to contain text from the biblical book of Leviticus.

However, while the En-Gedi scroll contained a metal-based ink which shows up in x-ray data, the inks used on the Herculaneum scrolls are thought to be carbon-based, made using charcoal or soot, meaning there is no obvious contrast between the writing and the papyrus in x-ray scans.

While ink in some Herculaneum fragments has been found to contain lead, Seales says it is only trace amounts and does not allow the inside of the scrolls to be read using x-ray data alone. Seales says it has also proved impossible to replicate findings that letters within Herculaneum scrolls can be deciphered by the naked eye from scans captured by a slightly different x-ray technique.

As a result the team have come up with a new approach that uses high-energy x-rays together with a type of artificial intelligence known as machine learning.

The method uses photographs of scroll fragments with writing visible to the naked eye. These are used to teach machine learning algorithms where ink is expected to be in x-ray scans of the same fragments, collected using a number of techniques.

The idea is that the system will pick out and learn subtle differences between inked and blank areas in the x-ray scans, such as differences in the structure of papyrus fibres. Once trained on the fragments, it is hoped the system can be used with data from the intact scrolls to reveal the text within.

Seales said the team have just finished collecting the x-ray data and are training their algorithms, adding that they will apply the system on the scrolls in the coming months. 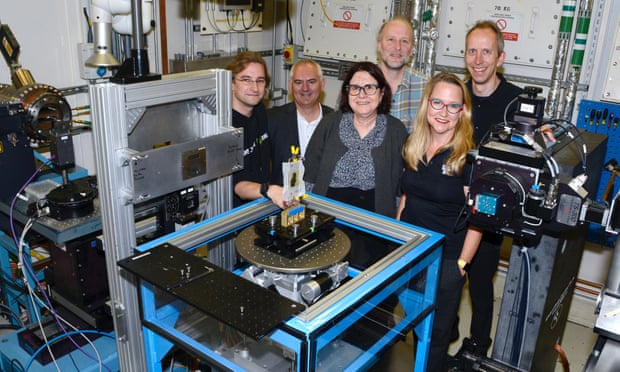 “The first thing we are hoping to do is perfect the technology so that we can simply repeat it on all 900 scrolls that remain [unopened],” said Seales.

As for what the scrolls contain, the researchers say they are excited.

“For the most part the writings [in opened scrolls] are Greek philosophy around Epicureanism, which was a prevailing philosophy of the day,” said Seales.

Another possibility is that the scrolls might contain Latin text. While classical libraries are believed to have had a Greek section and a Latin section, only a small proportion of scrolls from Herculaneum have so far been found to be in Latin, with the possibility there is a Latin section within the villa yet to be excavated.

Dr Dirk Obbink, a papyrologist and classicist at the University of Oxford who has been involved in training the team’s algorithms, said the project was immensely exciting and agreed it is possible the text might turn out to be Latin. “A new historical work by Seneca the Elder was discovered among the unidentified Herculaneum papyri only last year, thus showing what uncontemplated rarities remain to be discovered there,” he said,

But Obbink is hoping the scrolls might even contain lost works, such as poems by Sappho or the treatise Mark Antony wrote on his own drunkenness. “I would very much like to be able to read that one,” he said.

(For the source of this, and many other interesting articles, please visit: https://www.theguardian.com/science/2019/oct/03/ancient-scrolls-charred-by-vesuvius-could-be-read-once-again/)