The microscopic organism grows easily in salt water without any trouble. 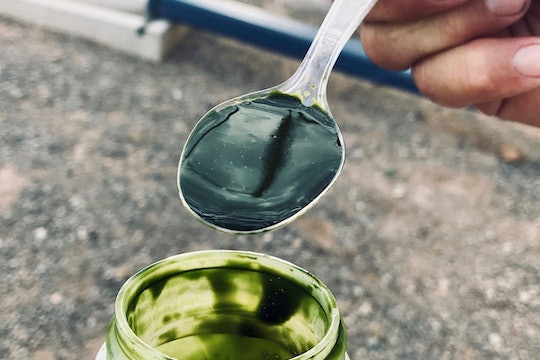 Eneko Ganuza grew up in Spain’s Basque country, not far from the sea. As a student studying oceanography, he fell in love with a seemingly unlikely specimen: microalgae. He was captivated by the way the microscopic plant-like organisms transformed miles of ocean into brilliant algal blooms, giving life to countless other marine creatures.

“Algal blooms are like a rainforest of life in the desert of the ocean” he says now.

Ganuza went on to become a leading microalgae scientist. As vice president of research and development at iWi, a Texas-based nutrition company that produces algal-based products on one of the world’s largest algae farms, he now applies his knowledge of one of the world’s smallest plants to solving global problems. Ganuza and his colleagues at iWi firmly believe that marine microalgae could help alleviate many of our most pressing environmental problems—foremost among them, freshwater shortage.

“It’s fair to say that water has been the underlying reasons for a lot of wars,” Ganuza says. “As the climate changes, this is becoming a more and more critical issue.” And indeed, according to the Pacific Institute, a non-profit group dedicated to protecting and preserving global fresh water, water has been at the heart of over 600 known conflicts around the world. Competition for that life-giving resource is only set to increase in the future, as fresh water becomes scarcer in much of the world due to drought and saltwater encroachment in coastal areas. A report released by the United Nations’ Intergovernmental Panel on Climate Change (IPCC) in September warns that sea levels are very likely to rise between 2- and 3.6-feet by 2100 (but the rise could be much higher, to as much as 6.5 feet, should the Antarctic ice melt faster than predicted).

Despite these strains on our planet’s freshwater supply, the demand for that resource is increasing, including for water-hungry crops and livestock, not to mention hydropower development and other human needs. By some estimates, as the human population continues to balloon, the world will suffer a freshwater shortage of 40 percent by 2050. “That’s tomorrow, by the way!” says Miguel Calatayud, chief executive officer of iWi. “My son will be 36, then, and probably fighting in the third world war—for water.”

Another IPCC report, published in August, warns that humans are exploiting the world’s water resources at an “unprecedented rate.” Central to this problem, the authors write, is our food production system. A breathtaking 70 percent of the world’s freshwater is currently used for producing crops and raising livestock. According to a 2010 UNESCO report, soybeans require 1,000 gallons of fresh water for every single pound of produce, chicken requires 4,300 gallons, and beef requires 17,700 gallons. And a single pound of almonds requires a whopping 23,700 gallons of fresh water.

If the cultivation of microalgae continues to spread around the world, it may help lighten the strain on our precious freshwater resources. Nannochloropsis, the type of microalgae that iWi grows, is a marine species. It thrives in brackish or salt water — not fresh water. This means the iWi system requires three orders of magnitude less water (5 gallons of fresh water per pound) to produce food than any other terrestrial crop.

While water for growing Nannochloropsis could come in the form of fresh water enhanced with salt and nutrients, it could just as easily come from the ocean. It could also come from vast underground salt and brackish water reservoirs found all over the world—including in many deserts and arid places where traditional agriculture is hardly viable. iWi currently relies on such aquifers at its Texas and New Mexico farms.

“Many arid areas on the planet are full of groundwater, but the problem is, it can’t be used because of its high salinity,” Calatayud says. “We can grow our algae in that salt water, which otherwise couldn’t be utilized to produce any other crop.”

Another boon for Nannochloropsis’ attractiveness as a sustainable, hardy crop is that it’s not overly picky about the salt content of the water it’s grown in. It’s equally happy in water that has about half the salinity of seawater, or in water that has nearly twice the salinity—or anything in between. “That means we can account for much of the evaporation, while the salinity of the cultures keeps building up in the ponds,” Ganuza says. That’s helpful, because the iWi tanks are completely exposed to the open, dry air. Their tanks in Imperial, Texas, don’t even have artificial lining, but instead just rely on the nearly impermeable clay-heavy soil that naturally occurs there.

Open-air cultivation of this sort is completely normal in the farming world, and iWi has demonstrated that microalgae can be grown like any other crop. “Industrial microbiology is very much based on running closed systems under sterile conditions,” Ganuza says. “But this is the simplest way of producing microalgae that you can imagine—we are farming.”

Perhaps most importantly of all, iWi is able to recycle about 95-97 percent of the water used to grow its Nannochloropsis (product recovery and processing account for the lost three percent). At the Columbus, New Mexico, farm, for example, iWi harvests roughly 30,000 gallons of pond culture to make 300 gallons of concentrated algae, and then returns just under 29,000 gallons of water to the pond for reuse. To recycle the water, the algae is micro-filtered out using a hollow fiber membrane system, which is a low-energy, chemical-free technology. Only crystal-clear water is left behind, and that’s put right back into the pond.

Calatayud imagines eventually democratizing algal farming by bringing similar systems to remote areas in Africa, Asia and beyond—to the types of places that have plenty of saltwater reservoirs and open space, but not enough fresh water to grow crops. “The world is full of areas like this that nobody uses,” he says. Nannochloropsis could be a source of export income, he believes, as well as a local source of food. “In addition to alleviating the global pressure on fresh water resources,” Calatayud says, “we could really make a positive difference for families and communities around the world.”

–(For the source of this, and many other important stories, please visit: https://massivesci.com/articles/algae-salt-water-ocean-climate-change-agriculture/)