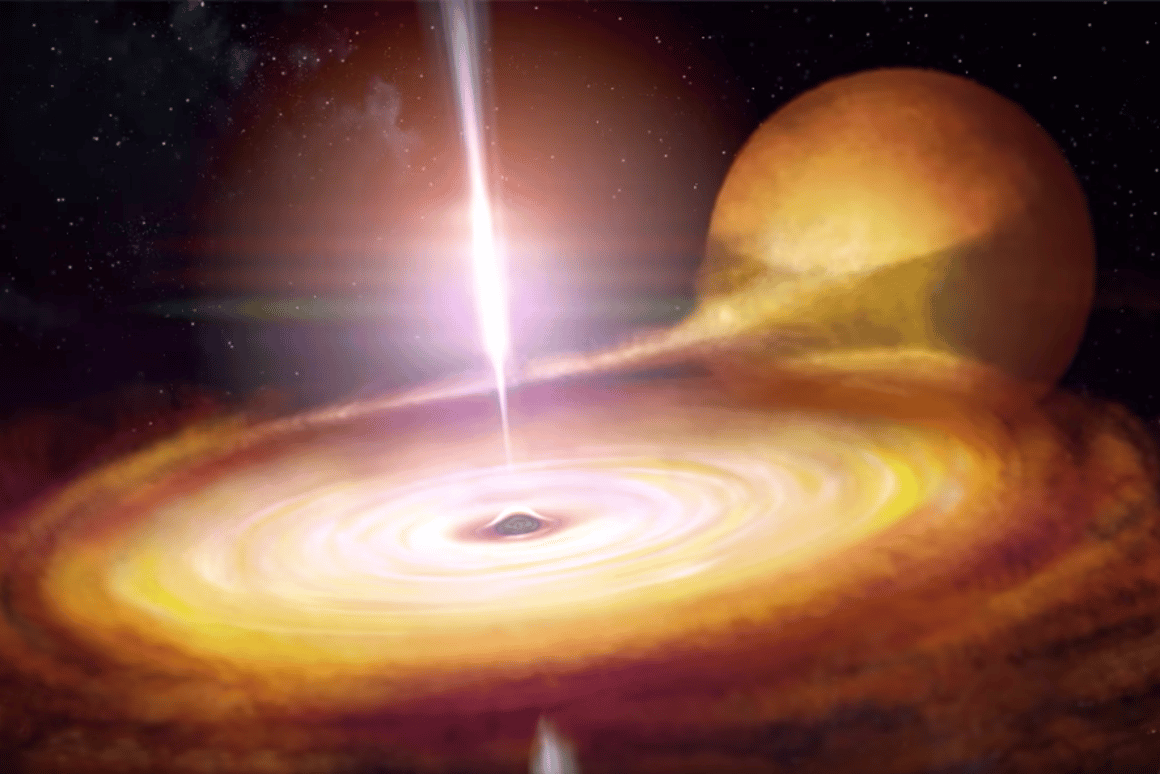 Screen grab from a high-frame rate video depicting violent flares at the heart of a black hole.  University of Southampton.

Advances in imaging technology are allowing researchers to observe scientific phenomena in exciting new ways, both here on Earth and far, far beyond. By training a pair of instruments on a nearby black hole, a team of astronomers have now produced a high-frame rate visualization of violent flares at its center in the kind of detail never seen before.

The black hole in question goes by the catchy name of MAXI J1820+070 and is located within the Milky Way, but about 10,000 light years away. It bears the mass of around seven Suns, condensed into a section of space covering less area than the city of London.

Like all black holes, MAXI J1820+070 emits wildly fluctuating ripples of radiation caused by interactions between its immense gravity and magnetic field. While instruments like the Event Horizon Telescope, which produced the first direct image of a black hole in April, have greatly improved our capacity to observe them, catching these fluctuations in action has been tricky so far.

Enter the HiPERCAM instrument on the Gran Telescopio Canarias in the Canary Islands and NASA’s NICER observatory on the International Space Station. By combining visible light detections from the former and X-ray light detections from the latter, the team led by astronomers at the University of Southampton was able to translate this data into an artist’s impression video that shows these violent flares in action, at more than 300 frames per second.

“The movie was made using real data, but slowed down to 1/10th of actual speed to allow the most rapid flares to be discerned by the human eye,” explains John Paice, a graduate student at the University of Southampton and study lead author. “We can see how the material around the black hole is so bright, it’s outshining the star that it is consuming, and the fastest flickers last only a few milliseconds – that’s the output of a hundred Suns and more being emitted in the blink of an eye.”

Aside from making for some cool footage, the work also revealed a few useful insights about how black holes function. The data showed that a rise is visible light is countered by a dip in X-ray light, with the fastest visible light flashes occurring a split-second after the flashes of X-ray light.

Scientists have observed these patterns in two other black holes, but never in this amount of detail. They say they are indicative of the presence of plasma deep inside the belly of the black hole, with these new observations adding further weight to the theory that all black holes might behave in this way.

“The fact that we now see this in three systems strengthens the idea that it is a unifying characteristic of such growing black holes. If true, this must be telling us something fundamental about how plasma flows around black holes…” said co-author Dr Poshak Gandhi “Our best ideas invoke a deep connection between inspiralling and outflowing bits of the plasma. But these are extreme physical conditions that we cannot replicate in Earth laboratories, and we don’t understand how nature manages this. Such data will be crucial for homing in on the correct theory.”

The research was published in the journal Monthly Notices of the Royal Astronomical Society, while the video can be viewed below.

(For the source of this article, to watch the video, and to read many other equally interesting articles, please visit: https://newatlas.com/space/high-speed-video-flaring-black-hole/)