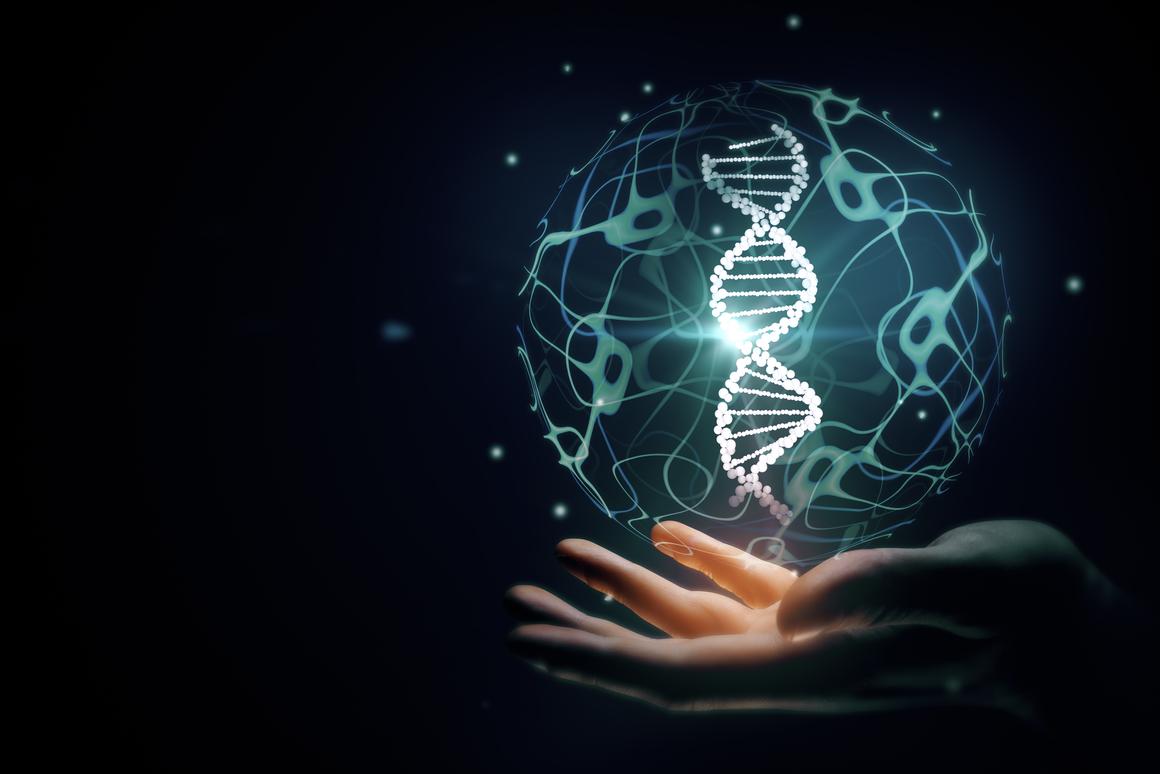 The dawn of a new age of superhumans could nearly be upon us. Humanity will begin steering its own evolution for the first time in history, with some predictable results and some we can’t see coming.  peshkova/Depositphotos.

Humanity is poised to take a huge leap forward, as a convergence of next-gen technologies combine to give us unprecedented power over our own biology. Here’s a roadmap to the key technologies and how it’s going to play out in the coming decades.

Jamie Metzl is an extremely impressive man. Having held senior positions on Clinton’s National Security Council and Department of State, and Joe Biden’s Senate Foreign Relations Committee, he’s also been Executive VP of the Asia Society, a Senior Fellow at the Atlantic Council and a former partner in Cranmere LLC, a global investment company. Today, while he’s not running ultra-marathons, he’s best known as a geopolitics expert, futurist and author.

Metzl writes in science fiction and scientific non-fiction, and his latest book, Hacking Darwin: Genetic Engineering and the Future of Humanity, delivers a serious, strongly-researched warning on what’s likely to happen if we sleepwalk into the genetics age.

We spoke to Metzl at WCIT 2019 in Yerevan, Armenia, where he appeared as a keynote speaker, moderator and panel member. (WCIT is The World Congress on Information Technology)

“Right now we’re at this moment of super-convergence,” Metzl tells us. “It’s not any one technology that’s determinative, it’s all these technologies happening at the same time, because they’re all influencing each other.”

The first of these, Metzl outlines, is cheap sequencing of the human genome. We’ll need a ton of genetic information to be able to find the patterns needed to move forward, and while the cost of full genome sequencing is currently the limiting factor, it’s dropping steeply, from around US$2.7 billion in 2003, to less than US$600 today. That’s going to have to come down by another order or two of magnitude before it starts getting used as a matter of routine.

Secondly, 5G connectivity and the Internet of Things promises to teach us enormous amounts of information about people’s health over the years, as wearable health analysis devices begin to stream back colossal piles of dynamic data about what’s going on in people’s bodies. Eventually, this will enable population-wide phenotypical research to be cross-checked against the genome to learn even more about how genes express themselves, individually and in concert with one another.

Thirdly, big data and analytics tools. The 2.9 billion haploid pairs making up each sequenced human genome represent about 725 megabytes of data, and dynamic health records will likely require even more storage space, in formats that can easily be cross-checked against each other at a massive scale.

Metzl notes that artificial intelligence – or more precisely, deep learning – is the only way we’ll ever be able to meaningfully process such monstrous amounts of data, and its capabilities are rocketing forward daily. Perhaps when it’s ready for serious commercial use, the speed and power of quantum computing will prove invaluable in quickly crunching through these petabytes of data.

Then of course, there are the wetter technologies: vastly improved IVF technologies that will soon enable us to generate egg and sperm cells from skin cells without needing invasive or embarrassing procedures to be carried out. Eventually, we’ll have the capability to cheaply produce dozens, or even hundreds of embryos to sequence, select and implant.

And of course, gene editing tools. CRISPR/Cas9 editing is the most famous example of these, but it’s already being compared to “genetic vandalism” due to its imprecise nature. More accurate and precise tools are constantly being discovered and refined to edit the genome of living subjects.

“We have to stitch together all these technologies,” says Metzl, “and it’s already starting to happen. And it’ll happen increasingly until the end of time.”

How the genetics revolution will play out

The first step, says Metzl, will be in healthcare. Our interactions with health care professionals will move from the current generalized model, to something more personal and precise as we start to understand what treatments work for people with certain genetic markers. Eventually, we’ll have enough information to start engaging in predictive health care.

“You don’t need to be perfect to make a huge impact on health care,” says Metzl, “you just have to be better than the status quo, where nobody has that information, for it to be applied.” It’ll inch forward, offering probabilities rather than certainties as more and more is discovered.

Next – and soon, we’ll start seeing advanced embryo selection as a core part of any IVF treatment. Prospective parents will start having multiple embryos to choose from, each of which will have its genome fully sequenced so they’ll be able to choose between offspring with a growing amount of information.

To begin with, this will allow parents to select against crippling genetic diseases, much the same as how parents who can afford the right scans can “select against” things like Down syndrome now.

All these things, and many more, are already known to have genetic underpinnings. And soon, parents will be able to choose between dozens, or potentially hundreds of their own biological embryos with this information at hand. All these possible kids are yours, so why wouldn’t you choose the one that appears to have the best possible shot at life? Not doing so, says Metzl, could grow to be seen as a “crime against potential.”

The disadvantages of having children the old-fashioned way will soon become apparent, as smarter, stronger, faster, healthier kids born from selection processes begin to dominate across a range of competitive situations, from sport to business to earning capacity – and these advantages will multiply with subsequent generations, as more and more science is applied to the reproductive process.

And that’s just using our naturally-occurring genetics. Soon afterward will follow precision gene editing, in which you select option J from your pre-implanted embryos, but make a few tweaks before you implant it. Here’s where things start getting a little sketchy, as you’re making edits to the germ line of the human species.

“Editing the genome requires the understanding that one gene might not just do one thing; it might do a lot of things,” Metzl tells us. “If it’s a particularly harmful gene, then we know the alternative is deadly, so that decision will be easier. But when we move into the world of non-deadly single gene mutations, well, then the costs of not having a full understanding go higher.”

Metzl says it’s clear which direction things will go.”We are going to do more and more complex genome editing,” he tells us, “either to address risks, or to create enhancements – and there will be no natural boundary between the two. This is all about ethics. The science is advancing, there’s nothing we can do to stop the science. The question is ethics.”

The dawn of a new age of superhumans could nearly be upon us, in which a lucky, selected, edited few will have extraordinary genetic potentials in a wide range of areas. Sports could become almost meaningless, as it’ll be impossible to tell a selected or edited human from a “natural born” one. Humanity will begin steering its own evolution for the first time in history, with some predictable results and some we can’t see coming.

Negative results, says Metzl, could include everything from a gaping division between genetic haves and have-nots – which could express itself within and between countries – all the way up to eliminating all human life altogether. “We may make choices based on something we think is really good, like eliminating a terrible disease,” says Metzl, “but then that genetic pattern that enabled that disease, in some other formulation, could be protective against some threat we can’t even imagine, that’s coming our way a thousand years from now. That’s why we need to be so respectful of our diversity. Genetic diversity, up to this point, has been our sole survival strategy. If we didn’t have diversity, you could say we’d still be single-celled organisms. We wouldn’t, we’d probably just have died. When the world changes around us, diversity is what helps us survive.”

And then there’s the potential of creating genetically engineered weapons. “Researchers in Canada spent $100,000 a couple of years ago,” says Metzl, “to create essentially a weaponized version of horse pox in the lab, to show what could be done. Well, that could probably now be done for $20,000. In five years, you might be talking $2,000. These tools are agnostic. They don’t come with their own value system. Just like nuclear power. We had to work out what are the OK uses, what are the not OK uses, and how do we structure things to minimize the downsides.”

Metzl wants people across the world to be informed about the technologies and capabilities that are barreling down the pipeline toward us, so meaningful efforts can be made to steer them in a direction that everyone can agree on, and set up clear redlines past which we agree not to venture. Each country, he says, needs to set up a national regulatory infrastructure to control the pace of these changes, and there also needs to be an international body with some teeth to make sure certain nations don’t leap ahead and change the nature of humanity just due to lax regulations.

Where does Metzl stand personally on how this next phase should be approached? “I’m a conservative person about this,” he says. “I mean, four billion years of evolution is a lot. Life has made a lot of trade-offs. So if you’re going against four billion years of evolution, you have to be humble. We know so little about the body. We can’t let our hubris run away with us.”

If you want to get informed on this incredibly complex, multilayered and potentially explosive technological revolution, Metzl’s book Hacking Darwin: Genetic Engineering and the Future of Humanity (April 2019) is an outstanding summary with more examples and possible future situations laid out than you could possibly need, written in an engaging style designed to be accessible to anyone. I found it extremely enlightening and recommend it thoroughly.

(For the source of this, and many other interesting articles, please visit: https://newatlas.com/science/jaime-metzl-genetics-revolution-hacking-darwin/)