Home
News
&
WEIRD ANIMALS
When male birds keep it interesting in the bedroom, both partners benefit
By Sarah Wells

Male birds are no strangers to elaborate romantic gestures, whether displaying vibrantly colored feathers, singing a sweet melody, or dancing around the forest floor. While researchers have long known about these mating practices, their exact origins have been more elusive. But new research on this question may offer insight into the cooperative relationship taking place around these displays and why they continue to happen in mated pairs.

A study published recently in the journal Proceedings of the National Academy of Sciences describes a computational approach researchers took to unraveling the mysterious origin of these displays and their effects on bird partners’ successful breeding. They used a neural network to evaluate which partner was gaining more through the interactions and which behaviors could be modified to make the exchange more mutualistic.

For example, while a male might successfully gain more offspring by performing a display that the female positively receives, the female would, in turn, have to waste more resources on the larger number of offspring, potentially affecting her ability to have another successful brood in the future.

To determine how these ‘sexual conflicts,’ as the study describes them, could be overcome to form a “stable cooperative system,” the team looked at different iterations of interactions (e.g. different male display traits, different female reactions, and different resulting brood sizes) to see what scenarios might lead to mutual cooperation. Study co-author Maria Servedio, Ph.D., professor of biology at the University of North Carolina at Chapel Hill, said in a press release that this approach allowed them to look at how these relationships change over time.

“The models enable us to see the wide ranges of conditions that can cause displays to become stuck in the population, evolutionarily, and that can lead to this result,” Servedio said. 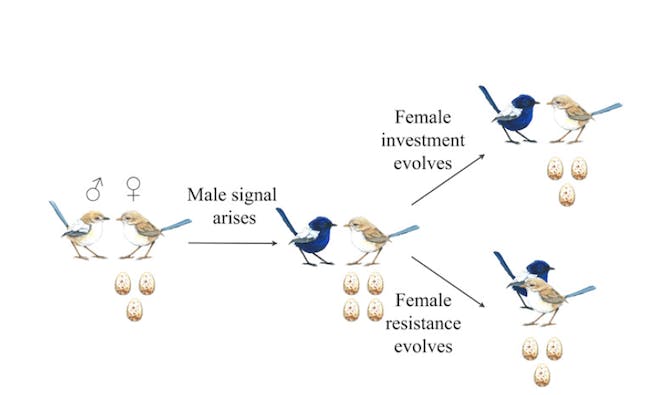 What Servedio and her team found from their study sounds oddly similar to advice human mates might receive as well: Continuing to show up and woo your mate can lead to successful reception, and in turn, breeding.

For the birds, this means that if the female bird who laid four eggs as a result of being receptive to a male bird’s display finds caring for the whole brood too stressful, she might instead lay three the next season as their positive reception to the same display. But, if the male bird does not continue to display the next breeding season the female might instead lay only two eggs. Therefore, by maintaining the display and lowering the already high brood number a little, both birds can mutually benefit from the interaction.

While their study purposefully did not include sexual competition, i.e. competing for mates, within their model, the authors say that these results give strong support to the notion of bird fidelity nonetheless, as the nuanced relationship between established mates in the study allowed for the eventual mutually beneficial relationship that evolved.

While anecdotal, senior author Trevor Price, Ph.D., professor of ecology and evolution at the University of Chicago, says in the press release that nearly all bird researchers have witnessed such displays of mate monogamy and devotion in their field research.

“Many bird researchers can tell a story like the experience I once had in the UK. I caught a female goldfinch, placed her in a bird bag and carried it back to the banding station. All the way back to the station, her mate followed, calling,” said Price.

“He waited impatiently in a nearby tree as I banded the female, and when I released her the pair flew off together in close company, twittering. This kind of thing happens in many other species, too, so forming a strong pair bond and emotional attachments between a male and female is evidently not only a feature of humans.”